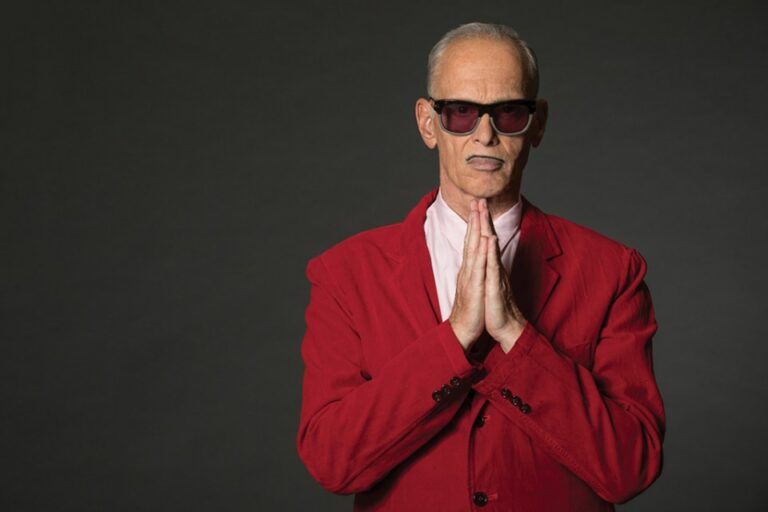 Atlantic City’s pseudo-new, mid-sized Anchor Rock Club hosts False Negative – A Birthday Show with John Waters this weekend, and like the filmmaker taking the stage, the audience is sure to be sickeningly artistic and wonderfully thought-provoking.

Revered “filth elder” John Waters turns 76 this week, and the irreverent writer, actor, director, and visual artist remains as active as ever with a new one-man show called False Negative and his first fiction novel Liarmouth coming our way. I interviewed Waters five years ago for The Aquarian about his one-man show This Filthy World, and given the increasingly volatile nature of life in America since then, he has plenty of new material to work with in his latest production. Prior to his hitting the road again, we spoke for a half hour about his new work, the nature of modern comedy, and how these days people seem to be losing their minds.

Everything has changing so much in the last several years because of all the social upheaval, political upheaval, and war. What’s the challenge like of trying to update your show and deal with so many different topics?

I update it all the time. But this time, I think I had to update it even more because you couldn’t ignore COVID and people are sick of talking about it. That’s kind of the ledge you walk on. Isn’t disease funny now? When I was young, we had sick jokes. The thing was nothing was as funny as an iron lung. That was a very common statement, so I even put an iron lung in one of my movies. I think in Cry-Baby. I guess you always make fun of the things you fear. So that’s okay, maybe disease…. We’ve all been through stuff, everything from some crabs to AIDs to thalidomide. We’ve survived a lot in my generation.

Do you think that because you’ve had all these different life experiences, it gives you a better context to turn them into good comedy?

Well, always, comedy for me is the edge that you’re walking on. I always make fun of myself first, and then I make fun of whatever the rules are in the outsider society I’m in. I did that in the very beginning. Multiple Maniacs was certainly a movie made for hippies that violated every hippie correctness there was. I make fun of political correctness today, but I think I am politically correct. I think I’m making fun of the world that I love and that’s why I’ve lasted this long.

People can point to you as the “filth elder” who likes a lot of things that people consider tasteless. But then I imagine when you’re making your own show, you still want to walk that line.

You have to walk the line, and the line is much, much touchier these days than it used to be. The people that used to censor me gave up on me a long time ago. They don’t come to my shows. But if anybody’s going to censor me today – and they have not – they would be the liberal, young, rich college students. I talk about this a lot in my show. When I was young – and I hate when people say that, that means they’re old – we made fun of ourselves first. That is the one thing I’m not so sure that the trigger warning crowd does… and I think they need to. I believe in mostly everything they say. I’d say they should even go further. But I’m too old to be Antifa. I’m too old to run from the tear gas even though I like their outfits.

What can we expect from this new show?

I didn’t say they finally caught up to me. I’m more humble than that. What I’m saying is that I haven’t changed, but the American humor has and it’s come closer to my kind of humor. Criterion’s putting out Pink Flamingos. Multiple Maniacs played on HBO Max. How could that possibly be?

It’s interesting because Roger Corman said years ago that at a certain point Hollywood started making his kinds of B-movies just on a bigger budget. I think you’ve talked about all the gross-out comedies people try to do.

I don’t even like them much because they’re not new. They try too hard.

Comedy and horror are the two hardest genres of filmmaking to do because to keep people laughing or people freaked out for a whole 90 minutes is tough.

They’re the hardest to translate especially in Italy. Italy does the weirdest…

Yeah, they are. And horror movies are a very different thing because they went through so many cycles. After Scream, when they went back to torture porn because they couldn’t be funny or make fun of it anymore, they lost me for a bit even though some of those I like. I’m not as much of a horror fan… I wanted to see X. I didn’t see that one. That’s the newest one that intrigued me and I will see it, but I’m not obsessed by all the horror movies like I was when horror movies were in the exploitation drive-ins – Herschell Gordon Lewis and all that kind of stuff. The best horror movie ever still is The Texas Chainsaw Massacre, and Night Of The Living Dead is second. I don’t know that they’ll ever be topped. The one genre I don’t understand is science fiction. I don’t know if they’re good or not, so I can’t tell.

Your first fiction book Liarmouth is coming out next month. It’s a “feel bad” romance and protagonist Martha Sprinkle seems to be such a scammer that even her own family doesn’t like her. And then she meets an insane man who makes her confront herself. What was the inspiration for that?

I have an exclusive [interview elsewhere] I have to talk to first about it, but I would say the inspiration is I did know somebody that had a girlfriend that did steal suitcases in airports. That’s the only thing in it that is inspired by anything true. Nothing else is. I’m always in airports, and when you used to get your luggage there was always somebody there checking the tag to match when you left. There’s nowhere in any airport where they do that anymore.

It’s true. Somebody could literally walk out with your suitcase.

Of course. Because once Pat Moran and I were togethe and she picked up the wrong suitcase, and we were all the way up the escalator and the man came running up. It was the same suitcase. It looked the same. That’s all you have to say. If you want to be a thief of bags in airports, there’s lots of tips [in the book].

It feels like we have less personal boundaries in society. Now many people are wanting to be less responsible for their own actions.

People get angry quicker. People are in a bad mood all the time. I think it’s scary to be in traffic. It’s scary to be around on the streets, and I never was [scared] before. Everybody’s insane. Like you don’t want to make eye contact a lot. Rich or poor.

I know. That’s actually a scary place to be. I see teenagers getting a lot more emboldened to do things like carjackings.

On school buses, 10-year-olds beating each other up and screaming and bloody. Jesus, it’s getting like Night Of The Living Dead. This summer, I think people are gonna go really crazy. I hope in a joyous way, and I don’t know if that will just lead to the next [COVID] strain, which it certainly could. I don’t know what’s going to happen, but as soon as it’s hot out, I predict mayhem.

By the way, Kim’s Video just reopened in NYC. That giant cult movie collection will be available again.

I used to go see many movies on 42nd Street with those audiences. Those Diane Arbus shots inside those theaters are so beautiful and amazing to me. I grew up in those theaters – in Baltimore, too. We had so many exploitation theaters and drive-ins. There was one called the Howard that opened at 8:00 a.m. every morning and it was 35 cents. Then it went to 50 cents each show, up to maybe $1. They had double features. They were in every city. I grew up and learned everything in those theaters. Then I’d go see the art movies too because they broke all the taboos with nudity and everything. [Ingmar] Bergman[’s Summer With Monika] was first shown in Baltimore as a sex movie. I even have the ad from the concession: “Get a Monika’s Hot Sundae.” I’m not making this up. What they did is they cut most of the dialogue and just leave the tits in and they called it Monika’s Hot Summer. They would show them in nudist camp theaters.

After all the wild adventures you’ve been on, what is the biggest life lesson that you could impart to younger people?