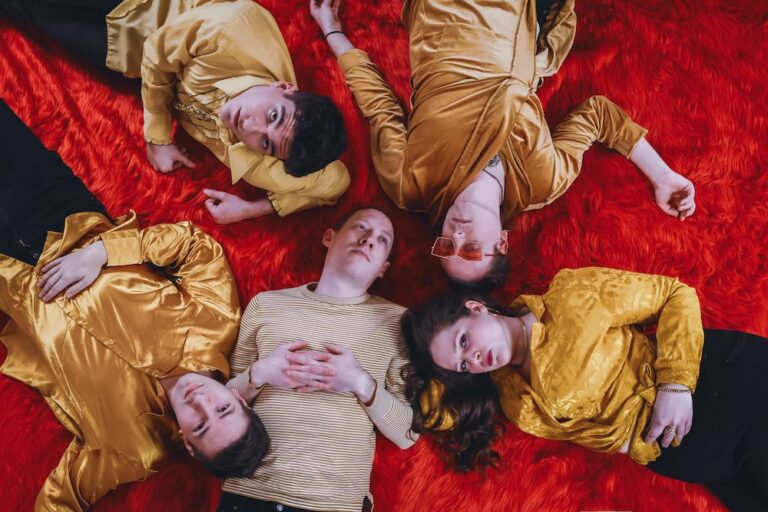 The Narrative of Erin & The Wildfire – As Explained By Erin Lunsford

Erin & The Wildfire are more hypnotizing than ever on their new record, which just so happens to be what they touring for when hitting up Rockwood Music Hall tomorrow, April 30.

You’ve heard of the sophomore slump, but we’d like to introduce you to the sophomore stride, a phenomenon that occurs only when someone, or something, is wholeheartedly dedicated to the subject at hand. For this offbeat, personable, and borderline sensual Virginia-based band, Erin & The Wildfire, that’s indie pop songs with a folk rock flair and a basis in realism, friendship, and soulful musicality. You get the best of every member of this quintet on this record (and on all they do, really). It’s a collaborative, united front of sizzling instrumentalists and a voice that glitters – topped off with a hint of feminist ideals, widespread appreciation for one’s true self, and more harmonies than one can count.

In a genre-defying world, Erin & The Wildfire embody what music can be. It’s blended and passionate, thoughtful and thought-provoking, but also just a whole lot of fun to listen to. When working on an album or new songs, what goals do you have in mind (if any)?

Oh, I love this question! We have lots of goals in mind when writing new tunes that range from having fun making music together, to writing songs that will touch people’s hearts. We aim to make music that we are proud of, while also trying to make something we think people actually want to listen to. Sometimes it feels tricky to ride that line of pleasing listeners and scratching our own creative itch, but I think we did that with Touchy Feely! For this album, we wanted to make something that felt cohesive, so that unfortunately meant cutting songs that we could have included because they didn’t serve the record as a whole. We worked up 20+ sketches to explore for this record and narrowed it down to 10. From a songwriting perspective, I am trying to write lyrics that feel representative of my personal story, but that are also relatable to the audience and applicable to the narrative of our band.

Touchy Feely is homegrown, indie pop rock that doesn’t shy away from catchy pop melodies. Is there a song or two on this record that you feel showcase what this band is all about personally and professionally?

Indie pop is definitely what we’re going for so thank you for affirming us. I think “Shape” really encapsulates what our band’s message is about these days: body positivity, internal beauty, and smashing the patriarchy. Musically it’s one of the most “pop” songs we’ve ever written so it feels like a good representation of our sound and what topics we care about. I also think “Little Me” is a good example to showcase because it came about after I started going to therapy in 2020. I was able to talk to my therapist about my child self, my lack of judgment on my body during my childhood, and the youthful curiosity and innocence I experienced just being in nature. Our band talks openly about mental health and body positivity, so both of those messages are tied into that song.

Speaking of this record and this era of E&TW as a whole, the artistry surrounding it is everything. Simple, but effective whether it be the promo materials or the cover art. If you could describe the sights and sounds of the Touchy Feely era thus far in just a few words, what would it be? (We’re thinking something like ‘making emotions aesthetically pleasing and danceable,’ but that’s just us!)

Radical self-love, shining like a ray of sunshine on our fuzzy hearts, illuminating our desires to love ourselves as we are and dance now. (That feels [very] dramatic, but it’s true!)

We’re partial to the album opener, “Ray of Sunshine,” which is the longest track on the record. However, out of the 10 songs that make it up, which are you most excited to bring to life on stage, whether that be here in the NYC/NJ area or elsewhere?

We are very proud of “Ray of Sunshine.” That tune had the most transformative journey from a shy, little, baby, acoustic song to a proud, eighties pop/dance banger. It’s very fun to play live and I think the audience really enjoys the live arrangement. We’re also excited to bring “Rich” to life in the live performance space because it’s so pop and so hard-hitting. We had to totally switch up our live instrumentation to be able to pull it off and it’s been a blast to execute. We always dreamed of making a record and then having to figure out how to perform the parts live after the fact, and that’s 100% what’s happening for that song. It’s v fun.

How has your location, your Virginian roots, played into the art you have made and the art you continue to make? Because there are some knocking Southern beats and riffs in your catalog.

Thank you! In our early days, we were drawing heavily on my Americana, folk, songwriter roots and our first EP really reflects that style. I am from Southwest Virginia and I grew up playing bluegrass and folk and I brought that writing to the guys in the first couple years. We basically tried to build full-band arrangements based on my solo songs. But since then, we’ve been trying to lean more into our pop, soul, R&B sensibilities because that’s truly the style of music we love to listen to and love to play as a group. Our first full album, Thirst, was soulful, funky, and pop-y, but Touchy Feely feels like we’ve landed firmly in the indie pop genre – finally. Our Virginia roots were very formative for me personally and my songwriting. I use elements of nature in our writing (mountains, rivers, lakes, waves, valleys, wind, etc.), that directly draws from our Virginia landscape.

There was a good five years in between albums, which is respectable and was clearly worthwhile in terms of a dynamic, harmonious evolution, but do you think there would have been a five-year gap had there not been a pandemic smack in the middle of it? What about these five years were important in terms of getting to Touchy Feely?

I think the pandemic forced us to focus on our writing in a really deliberate way that we wouldn’t have been able to achieve if we’d still been continuously touring like we were in 2019/early 2020. We started a virtual writing process (Thank you, Google Drive!) that allowed us to dig deep on some of our songs. For example, Nick was able to upload full tracks for a tune whereas in the in-person practice space he may have only suggested drum parts. It just really opened up our personal contributions to the songwriting process and allowed us to experiment with new sounds, tempos, textures, harmonies, etc that are hard to emulate in a live rehearsal setting. So, yes, the pandemic in some ways slowed us down and caused us to take another year before recording, but it also allowed us to come up with six brand new tunes and explore them in depth before hitting the studio.

TOUCHY FEELY IS OUT AND AVAILABLE WHEREVER YOU LISTEN TO MUSIC! FOR TICKETS AND INFORMATION ON ERIN & THE WILDFIRE’S SHOW IN NYC ON APRIL 30, CLICK HERE!