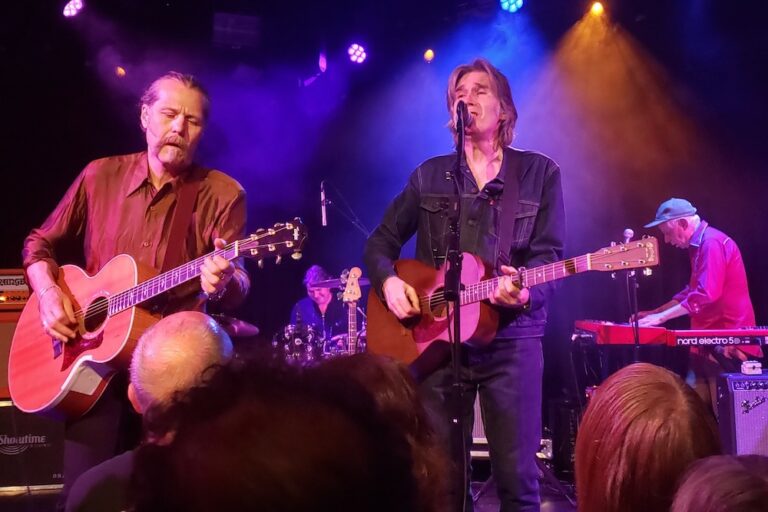 Countless bands have enjoyed one hit song in the United States and then retreated into oblivion. In that regard, Del Amitri’s story is unremarkable. Larger globally than in America, Del Amitri sold six million albums worldwide in its heyday, then disappeared for the most part in the past couple of decades. How will the one-hit wonders fit in today’s world?

Formed in 1980 in Glasgow, Scotland, Del Amitri rocked six studio albums between 1985 and 2002, several of which were commercially successful back home. In 1995, “Roll to Me” reached number 10 on Billboard’s Hot 100 at a time when few British acts charted in the United States. The band split in 2002, reformed briefly for money gigs back home in 2013 and 2018, and finally reunited with the intention of recording new music in 2020.

After a lengthy career hiatus, bassist/vocalist Justin Currie and guitarist Iain Harvie returned as Del Amitri’s sole consistent members. The other current members, guitarist Kris Dollimore, keyboardist Andy Alston, and drummer Ashley Soan, also played in the band in times past. Del Amitri ‘s 2021 album, Fatal Mistakes, was the first since 2002. Mixing past and present, the current live repertoire includes up to seven songs from the latest album, along with twice as many songs from the band’s 1990s catalog.

At (le) Poisson Rouge, Kris Dollimore started the night with a solo set largely comprised of instrumentals, showcasing his finger-picking skills at classical guitar and slide work on blues guitar. After intermission, he shared guitar duties in Del Amitri with Iain Harvie. While the two jangly guitars played a crucial role in powering the songs, Currie was the centerpiece, delivering fine vocals and songwriting. “Roll To Me” was performed towards the middle of the show, with every song leading to and away from that breezy hook played with equal precision and pop flair. Warm melodies and crisp harmonies were pleasant, and gang vocals on many choruses repeatedly gave the performance a commercial Eagles-like country-rock sound. Considering that the band was born in the midst of the alt-rock movement, the slick and measured performance seemed more mainstream than ever.

Witnessing the response of the public to many of the once-popular bands presently on the 2022 concert trail, Del Amitri likewise may survive the 21st century music industry. Album sales may be sluggish and American radio exposure may remain limited to the band’s one hit, but record sales and radio play are no longer the only engines of the music industry. Positive word of mouth about the live show will encourage the core faithful base to purchase concert tickets and merchandise. Hopefully this will be enough to Del Amitri afloat.