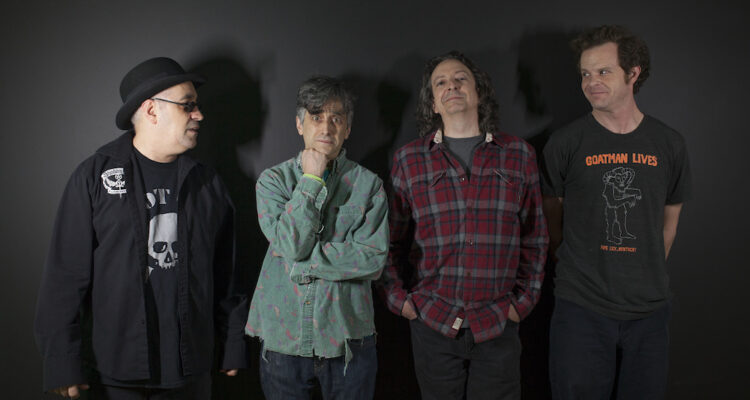 Somewhere on the internet is a grainy video of the Dead Milkmen playing the Atlantic City Elks Lodge.

Thanks to the opening of the Anchor Rock Club last year at 247 S. New York Ave. in the famed beach hotspot, the Milkmen will be back, doing their thing, in that very same city on May 13.

Though not traditional in any way or genre, The Dead Milkmen were an early pillar of Philly’s music scene, forming in 1983 – Rodney Anonymous and Joe Genaro sharing vocal duties of creatively insane lyrics while playing keys and guitar respectively, the late Dave Blood on bass and Dean Clean holding it together on the drums.

“We had a very collaborative attitude from the beginning. A few years in I started learning guitar too, so I was able to help write some of the songs,” says Dean, who’s actual last name is Sabatino.

Today Sabatino lives in Media, Pennsylvania with his wife. His 24-year-old son has broken into the music business, as well, producing and getting involved in video, a point of pride for Sabatino. The Milkmen drummer is a graphic designer, creates solo synth music, and also plays with the instrumental guitar rock band, I Think I Like Midnight.

The Milkmen released their first LP, Big Lizard in my Backyard, in 1985 on Restless Records, which was putting out all manner of alternative music in the eighties. That record was quickly followed by Eat Your Paisley in ’86.

“We started in the hardcore scene playing those shows, but we definitely weren’t a hardcore band. We were part of the college radio scene, and I don’t know that that exists much anymore. For a long time, we kind of existed going from one university town to another playing shows. We started by calling ‘that guy John who books shows in his basement’ and then moved on to clubs and bigger venues with that indie rock do-it-yourself ethic,” Sabatino explains.

What made the Milkmen special was not only their quirky and often political humor that skewered redneck conservatism and closed-minded mentalities, but they simply didn’t sound like anyone else before or during their time.

“Politics have always been a part of our music, even if we did it through humor… but we had something to say and we wanted to make our statements,” Sabatino adds.

1988’s Beelzebubba was somewhat of an offbeat hand grenade that no one saw coming with the iconic “Punk Rock Girl” exploding beyond their usual college radio airplay. It was a particularly odd time for an unpredictable Pennsylvania indie-punk band to have something of a hit. The early eighties golden age of American punk was over and it was still years before the alternative breakthrough of 1991. Plus, Philly was barely yet on the musical map.

“It was strange. We were on rotation on MTV with all those hair bands,” chuckles the musician.

The following years saw recording and touring to exhaustion. They recorded the classic Chaos Rules: Live at the Trocadero in 1994 and amicably went separate ways.

Sabatino admits that he “initiated that after so many years of just being on the road.”

It was a full decade before they became active again, but things took a turn for the worse when Dave Blood (Dave Schulthise) took his own life. They played two benefit shows in his name but didn’t play together again until they were billed atop the lineup of Fun Fun Fun Fest in Austin in 2008. They continued to book occasional shows and record for the next ten years until the pandemic derailed plans for a new album.

“We started practicing again last fall when we felt like it was safe to do so. The first thing we did was pick up on the songs we had been working on. We’re playing a few shows in the spring and summer, but we want to complete this album. We have about six or seven songs we need to finish to get the record out.”

The band’s most recent release is 2020’s (We Don’t Need This) Fascist Groove Thang 7-inch, darkly ironic that the same extremism they railed against four decades ago still, and possibly more relevant today. They do a weekly video called Big Questions with the Dead Milkmen on Youtube where they discuss a topic and let the discussion range from of deep philosophy to hilarity.

Sabatino is also excited to have watched Philly’s scene transform for the better through his life in music.

“There are some great venues in Philly. I know Rodney is really into industrial music and he used to complain that bands would skip Philly, but it’s been good to see it really grow in the last ten years. The R5 guys have done a good job. There have been so many great shows at the Church. I really enjoyed the Boot and Saddle, which unfortunately is no more. But I really like Underground Arts, Johnny Brendas, and now there’s Union Transfer and the Filmore.”

The Milkmen show in AC is anything but random. When the Anchor Rock Club opened in the city known for anything but punk and/or original music, the enlisted Philly’s Chris Ward, who had had become the booking kingpin for Johnny Brenda’s, the venue credited for helping revive the Fishtown neighborhood. Ward has been attracting national acts to AC since last summer, bands that would have never ventured that far down the Parkway.

And so, as the skit at the start of ‘Bitchin’ Camaro’ made reference to so many years ago, “rumor around town says they might be thinkin’ ’bout goin’ down to the Shore.”

“People think we hate the Shore,” laughs Sabatino in reference to that tune and “Beach Song” on the same album, “but we don’t.”

FOR TICKETS TO SEE THE DEAD MILKMEN PLAY ANCHOR ROCK CLUB ON MAY 13 OR WHITE EAGLE HALL ON MAY 14, CLICK HERE!