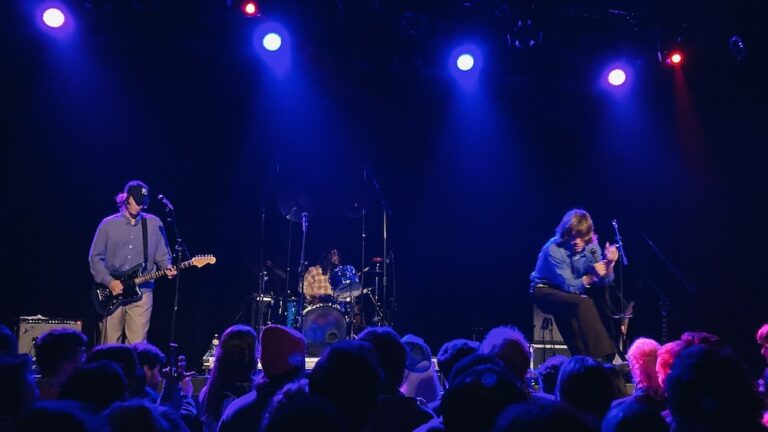 Music Hall of Williamsburg Welcomes Porches: “A Sight to Behold”

Distorted, loud, and even with a little mosh pit, Porches stunned in Williamsburg on April 19.

Starting as a lo-fi rock band in 2010, Porches has largely been a self-produced project founded by New Yorker Aaron Maine. With the critically-acclaimed release of their sophomore album, Pool, Maine took Porches in an indie-electronica driven direction, full of space and radiating synths. The mainstay of the project’s sound is Maine’s defining, hoarse, brooding vocals, which end up sounding incredible live. With his latest full length, All Day Gentle Hold, Maine has successfully managed to energetically mesh the original lo-fi roots with a synth-pop flourish.

Water is a recurring theme throughout Porches’s work, as can be heard on the track “Watergetsinside” where Maine repeatedly sings in the chorus “The water gets inside / The water gets inside sometimes.” This imagery emerges in the live performance vastly throughout, such as on songs like “Braid” where the live three-piece echoes a grooving, babbling brook, to at the end of the main set after “Underwater” where guitarist Dan English exits the band with noisy feedback as the lights flash violent white, reminiscent of some insane lightning storm.

At the top of the set, the band walks on stage with Maine flaunting a stylish pair of retro sunglasses (that he happens to drop a few times when the band comes to their massive crescendos). Another visual note that amplifies seeing Porches live is the two crash cymbals that the drummer sets up to tower over the drums; it’s a testament to modern drum engineering that they don’t fall over on the bigger hits during the set.

It’s an incredible experience when Maine breaks into a visceral scream on “Swarovski” or “Lately,” as he did in Brooklyn. These moments allow fans to realize how much the lead singer/guitarist lays his whole being into the performance. When he’s not letting out unhinged screeches, Maine’s vocals have an auto-tuned echo effect over them as he croons on the beat of the songs in an almost laid back way. He dances across the stage with a nineties grunge inspired movement in his step, which is an era that inspired the songwriter. Maine even says thank you in a sort of auto-pilot fashion to the crowd more times than a person can count on two hands, while other times he talks about fish gills in an animated way. His stage presence is simply a sight to behold.

Porches also brought on two guest vocalists that previously collaborated with Maine, Chloe MK on “Swimming Big” and “Grab The Phone,” as well as Dev Hynes on “rangerover” and “Do U Wanna.”

In every way possible, Porches is an experience. The new album is beloved by fans as they would sing along to its catchy, raw hooks. The described “oldies,” as Maine calls them, are fantastic and equally adored by the crowd. Porches embodies the word awesome.