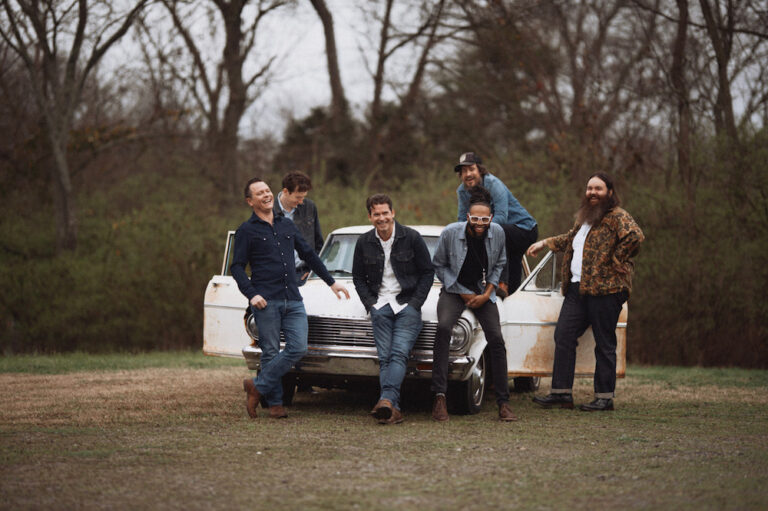 Guitar, slide guitar, mandolin, banjo, dobro, and vocals – these are the musical traits Mike Harris brings to Old Crow Medicine Show. He might be the newest member of a band drenched in rich history, but he is a shining star, an excited addition, and an equally as diverse talent.

“I actually came into this lineup about a year-and-a-half ago,” Mike Harris tells The Aquarian about joining one of our favorite roots groups in a not-so-easy time period.

“I started within the pandemic and everything, so I was actually not performing with these guys quite yet. It was a very interesting time. I was still connected to other acts in Nashville at first – I was actually playing a show with somebody else the night before the nationwide lockdown was enacted, so it was definitely a wild time.”

Regardless, the instrumentalist was able to come into his own within the musical variety show that is Old Crow. As a fan and friend, he was able to be creative and artistic on guitar (and off) within the Southern-inspired rock outfit during much of the stagnant global health crisis. Timing is everything, and Harris’ immaculate musicianship coming to play in 2022 proves that it’s rarely wrong.

I’m very excited in a way that maybe I wasn’t a couple of years ago, before the pandemic and everything. I like to tell folks sometimes from the stage about how we’ll never really take this for granted ever again. It was a shocking thing to have it all go away and while it needed to go away for everybody’s public health and safety, but it was a real tough thing to endure. The only way to stay in this kind of work is because you are actually living and breathing it – loving it. Especially in a band like Old Crow Medicine Show and so many of the best bands on the road, you also just absolutely love every single one of your fans and anybody that comes out and buys a ticket to enjoy a night of you getting up on a stage to do what you love to do. To not have that for such a long time, it was definitely very trying. It was a very hard time, but I think the excitement is matched with a new level of appreciation for the opportunity and the privilege to get to do this kind of work.

That is the best way to look at it.

Yeah! I think that it’s been nice in the shows that we have played in the past year or so (since things have kind of opened back up) to come out to such an appreciative crowd and people who are grateful for the same reason that we are grateful to have that privilege back.

Definitely. I even think about the tour dates and the fact that our area here has a show in each of our main regions: New Jersey, New York, and Pennsylvania. It goes to show how many people, how many places, are needing these in-person experiences. The jam-worthy music of Old Crow Medicine Show is, to that point, socially and culturally sound.

I couldn’t agree more. I was a huge fan of this band for a very long time and was lucky enough to call a lot of the members of this band – past and present – friends of mine. The opportunity to get to play alongside a band that I rode around Nashville as a 19 year old kid blasting their records through my car speakers… it is kind of surreal.

For you to be able to do this, achieve this greatness of playing with a band you love and bringing it’s music to life for others, must feel wonderfully full circle.

A hundred percent. That’s the only way to describe it. It’s a very exciting time with this band and it’s a very versatile lineup in its current state, so I’m excited to get to showcase so many fun sounds that we’ve been working with in the studio, on this new record, on the stage. I hope that everybody’s willing to go on the journey with us. It’s a record that represents, sonically, a new ground for this band. The throughline is always gonna be American roots music, Americana, and roots, folk-y old time sounds will always be the backbone of this band. That’s definitely showcased throughout the whole show, even in the new stuff. It’s a good time.

Old Crow Medicine Show has always looked at the originals and the classics with really fresh, modern eyes. You’re able to hear singer-songwriter, material, blues, folk, and Americana at once, then use it all as a basis of where the music can continue to go.

I’m glad you feel that way. I feel the same way. It can be a challenge to carve out some new sounds, especially within the framework of a genre of music that oftentimes is looking backwards through time, but I think this band can continue to rise to that occasion, for sure.

Something about this band that I’ve always taken note of is how every member of the band, new and old, carries their own weight in terms of talent and style, finesse and skill set, yet it meshes well, creating a united and comprehensive sound. Coming into the band with your own experiences and your own background, do you think that’s what makes Old Crow Medicine Show what it is? Having a diverse lineup that comes together?

Absolutely. We all have the same musical touchstones that are our unifying influences, but the fact that so many of us come from so many different disciplines of music should be a strain for a band, but it allows us a much broader palette to work off of.

Over the past year or two, since you have joined the band, Old Crow has released an album, Paint This Town, singles, and quite a bit more music that wasn’t able to be toured for right away. However, as you mentioned, this is an exceptionally immersive show for people to go out to. For you, how does it feel to be playing these songs live finally?

Luckily for the Old Crow shows, they give us enough time up there to make sure the old favorites are always gonna be heard just as much as the new ones. We cover so much ground. No way you’re gonna come to an Old Crow Medicine Show show and not hear all of the standby tunes that got this band to be this 25-year-old touring act.

Something we like to say when we’ve taken the stage at the Grand Ole Opry is something that Mr. Roy used to get up there and tell the bands: “You don’t come to the Opry without playing the song that puts you up there in the first place.” [Laughs] This is why the Old Crow Medicine Show has always closed out with “Wagon Wheel,” especially when we played the Grand Ole Opry, but I think that principle is in place always.

It’s very exciting to get to play the new material and we’re all excited to see how it goes over. We’re working hard on it in the rehearsal space. […] It’s our new thing, we want to shine light on it, and we hope that the fans follow us on this journey.

OLD CROW MEDICINE SHOW COMES TO BROOKLYN BOWL PHILLY ON MAY 4, WEBSTER HALL ON MAY 6, AND UNION COUNTY PERFORMING ARTS CENTER (UCPAC) ON MAY 8. FOR TICKETS AND INFORMATION, CLICK HERE!