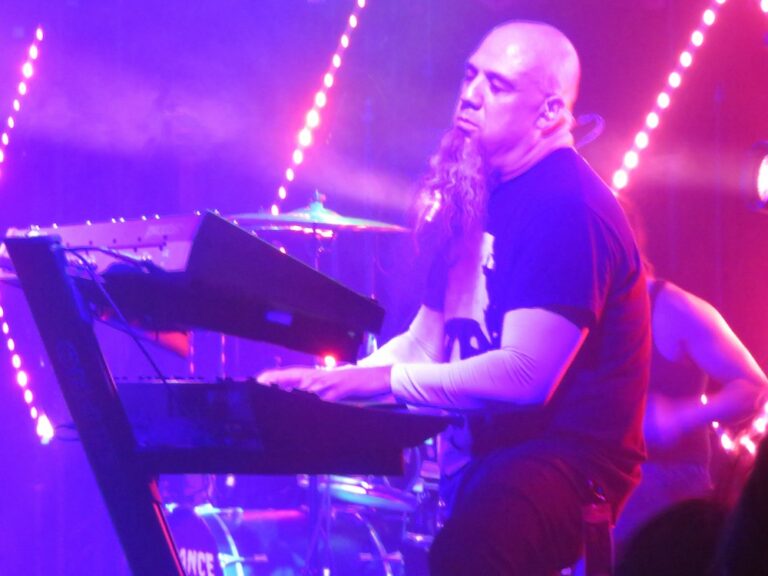 As youth, Justin Pointer and Tony Kim lived in the same community in Orange County, California. They played in separate local heavy metal bands, and were drawn together in 2012 by their mutual interest in electronic dance music. They decided to see if they could make music together that combined core elements of metal and synthwave. A fan of horror films, Kim shared an idea for a song called “Dance with the Dead” and Pointer suggested using that song title as the name of the band they were forming. Dance with the Dead released its sixth album, Driven to Madness, on January 10.

In past live appearances, Pointer and Kim have performed as a duo, adding guitar licks to prerecorded tracks that sometimes included vocals. At (le) Poisson Rouge, Pointer and Kim were joined by a drummer and the deliberate design was not to simply accompany pre-recorded tracks. The experience was an authentic concert, with the trio singing and playing in real time.

Earlier in the evening, Das Mortal and the Magic Sword energized the audience in a rather dark room. Once Dance with the Dead came onstage, the production was quite the opposite, with a backdrop of constantly flashing lights and fast-moving floodlights shooting onto the musicians and into the audience. [Note to the band: all these blinding lights were excessive and frequently distracted attention from the musicianship.]

Much like the lights, the musicians produced tons of kinetic energy. Kim banged his head to the music so much that the audience hardly saw his face. Pointer was equally volatile on guitar when he was not rocking a tower of keyboards, synthesizers, and sequencers. The drummer was difficult to see in the mist that was sprayed continuously onto the stage, but he added intensity with his hard-hitting percussion.

Dance with the Dead’s songs were anchored with massive synthesizer or guitar riffs born out of metal and industrial music. The booming riffs dominated so much that a listener sometimes needed to watch the lead guitarist’s hands to catch what else was happening beyond the thunder. It was too easy to get hypnotized by the flashing lights, the moving bodies, and the chugga-chugga rhythms, thus missing the lead melodies being played. This is where traditional spotlights rather than Times Square lighting would have helped the audience focus on what was happening in the music.

Like a Venn diagram, Dance with the Dead presented both as a classic rock outfit and a more avant-garde experimental band, yet the intersection where the two genres met was most impressive. Amidst harsh, droning waves of swirling synths and brief moments of symphonic Gothic metal and industrial noise, the speedy bounce and searing guitar licks maintained a bombastic intensity. Some musical movements were more stadium rock and some were more darkwave, and the musicians managed to unify the best attributes of the two styles for a distinct sound. The effect was smart and mesmerizing.