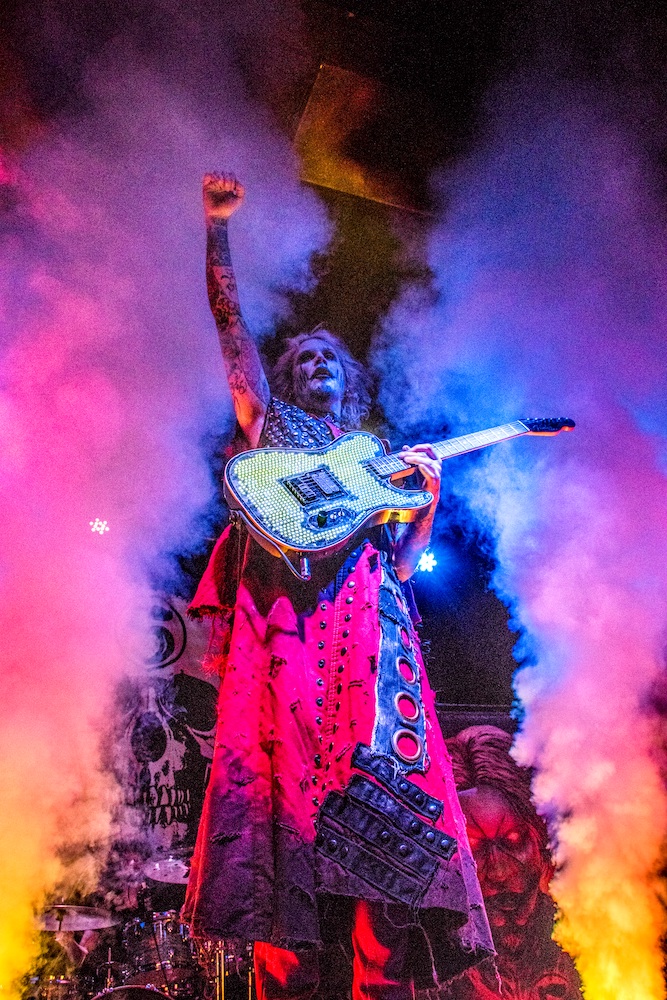 Orange Loop Rock Fest is gearing up to be one of A.C.’s most tremendous – and possibly loudest – events of the year. One of its performers, the shredder to end all shredders, is taking its stage on day two, so we caught up with him, his talents, and his interests.

John 5 is one of the most in-demand guitarists around. For over 45 years, he has been playing guitar. At age 17, he moved from Michigan to Los Angeles where he became a session musician, but he has written for movies and television, as well. For this reason and many more, his resume of collaborations is impressive: Lita Ford, Rob Halford, Lynyrd Skynyrd, Ricky Martin, Tech N9ne, Avril Lavigne, k.d. lang, Alice Cooper, but he is most known for playing with Rob Zombie since 2005. John 5 is one of many rockers performing at the inaugural Orange Loop Festival in Atlantic City in June, so AQ’s Ray Romanski caught up with him to chat about that, movies, and more.

Where are you calling from?

How have you been?

You’ve had a very busy 2021. You released an album with Rob Zombie, an album of your own called Sinner…was that intentional or was that the first time you could get into the studio?

One of the tracks on Sinner, “Que Pasa,” features Dave Mustaine. What was it like working with him?

I’ve been such a huge Megadeth fan for so long. They’ve always been one of my favorites. I got into them on their first – well, I wouldn’t say on the first record but I remember buying Peace Sells when it just came out. And it’s wonderful, he just kills it in the studio. We originally had a James Brown sample and the record company was like, “Well, we can’t use that. Who do you want to use?” I said I’d love to use Dave Mustaine. I called his assistant, he played Dave the song, and he was into it. I was honored to have him be a part of it.

Peace Sells is a huge record to me, as well. I asked for it for Christmas when I was 12 and I got that, Number of the Beast, and Master of Puppets.

Those are three great records. Must have been one hell of a Christmas. There ya go, changed your life.

You also have a song with Peter Criss and another with Carla Harvey of Butcher Babies on Sinner.

With Carla, I was like, “I just need one word: Euphoria.” She gave me a bunch of different variations of it and there was one where I was like, “This is absolutely perfect.” It’s hard to try and explain exactly what you want and all that stuff. But just that one word makes it and I love it. Then Peter Criss; of course he’s one of my favorite people in the world. It’s an honor to have him be a part of that record. I’m the biggest KISS fan there is.

I saw you on tour with Zombie a few years back and you brought Peter Criss out when you came to NJ.

That’s right. And with my shows, who knows? He might come out for the New York shows when we play Les Paul’s club – maybe in Atlantic City, too.

What is it like to be on tour again?

How can I explain it? I’m on the road so much that it was like not being able to breathe – or walk, something like that. To bounce back, absolutely wonderful. You’re not terrified of what’s going on. You’re not like, “Oh my god, what’s gonna happen?” I couldn’t be happier. Very busy year ahead of me, which is good. That’s exactly what I want. I don’t look at it as busy; I look at it as fun.

You are currently touring with The Haxans.

You’ve worked with Piggy D before. Is that why you chose them to support you?

Well, we’ve known each other for a long time being in Zombie and all that stuff. I really like the Haxans a lot so I was like, “Hey, let’s go do some shows together. Why not?” Then probably as late as November, maybe even go to Europe to do some gigs over there with the Creatures.

Not only do you have tour dates with The Creatures and alongside Rob Zombie, but you also have a few festival dates planned, including the Orange Loop Festival at the Showboat in Atlantic City in June. Have you ever been to Atlantic City?

Yeah, that’s gonna be a blast! I love playing festivals; all the bands and being able to be a part of it. It’s instrumental music. I’ve been to Atlantic City, but never to that festival or that casino. We’ve played many shows in Atlantic City. A bunch of them.

Doyle (of the Misfits) is supporting you, too, later this year! That seems like a natural pairing honestly. Are you a big Misfits’ fan?

Yes and yes. An Australian tour. We did a tour there before and it was very successful.

You posted about Taylor Hawkins’ passing a few days ago. Do you have any thoughts?

It’s just such a shame. He was such an… incredible musician. Drummer, singer, lover of music. He was such a fan. On top of everything, he was a great human. Great dude. Everybody loved him. That’s what is so heartbreaking right now. Such an incredible future.

And earlier this year, Meat Loaf died too.

Yeah, another one I worked with. He shouldn’t have gone.

What horror movie are you most excited to see in 2022?

I don’t really have any. I would say the movie I’m most excited to see is probably The Munsters. I’m super excited about that. That’s gonna be a blast [and] I’m so proud of [Rob Zombie] honestly. Such a huge accomplishment as it’s been a dream of his for years.

I’ve been watching a lot of horror movies from the forties and fifties. Do you have a favorite movie from this classic era?

–Creature of the Black Lagoon, Creature Walks Among Us, Revenge of the Creature, The Wolfman, Werewolf of London… What are the other Wolfman movies? God, I can’t believe I’m blanking on this one. It’s gonna kill me. The Mummy, The Mummy’s Hand, The Mummy’s Ghost. The Mummy’s Tomb.

–Invisible Agent, The Invisible Man. All that stuff. I love all those movies.

I’m afraid to ask, but do you have a favorite actor from that era?

Did you know Boris acted in over 80 movies before he starred as Frankenstein?

Wow. Yeah, it was different back then. If you were a contract, you were like, “What movie am I working on today?”…She Wolf, I remembered. They made a lot of movies. They cranked them out.

You have played with everyone – Joe Satriani, Steve Vai, Zombie, Alice Cooper, Marilyn Manson, David Lee Roth, Paul Stanley, Ace Frehley, Peter Criss. With the last three, were you intending to do a KISS gamut?

I haven’t played with Gene [Simmons] yet, which is weird as he’s a friend of mine. [Laughs] Maybe in the future.

Anybody. I really love collaborating with other musicians. Whenever something comes along, it’s always a great opportunity because I don’t have all the answers.

How do you adapt your guitar playing when writing for people like Rod Stweart, Tech N9ne, or Ricky Martin?

It all comes down to a great song. It all circles back to that. Doesn’t matter if it’s on one instrument or if you have a good melody. If you have good music, you can turn it into any style of music you want.

Do you ever have a riff you keep to yourself?

Really? You’re never stingy with them?

I always put it out into the world and see what happens.

YOU CAN CATCH JOHN 5 ON TOUR NOW – CLICK HERE FOR TICKETS AND INFO. HE TAKES THE STAGE BEFORE STONE TEMPLE PILOTS AT ORANGE LOOP ROCK FEST IN ATLANTIC CITY ON SUNDAY, JUNE 12, FOLLOWING HEADLINER CHEVELLE ON SATURDAY. DETAILS ON THE FEST CAN BE FOUND ON IT’S WEBSITE!