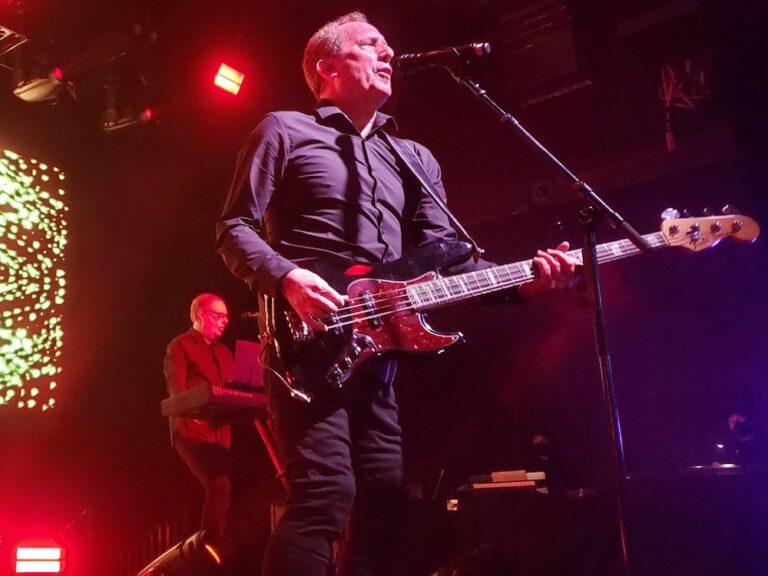 Orchestral Manoeuvres in the Dark (OMD) followed Kraftwerk and Gary Numan in the late 1970s as pioneers of synth pop, a genre that exploded in the early 1980s with Depeche Mode, Erasure, the Eurythmics, the Human League, the Pet Shop Boys, Tears for Fears, Ultravox, and similar electronic-centered bands. OMD enjoyed greater and longer success in its United Kingdom homeland than it did in the United States, where the group peaked in the mid-1980s due to “If You Leave” being featured in the film Pretty in Pink. Worldwide, OMD has sold over 15 million albums and 25 million singles.

Due to being born in the punk rock era, OMD was not immediately popular, and periodically entered and faded from the limelight as public interest in synth pop escalated and diminished. Even as numerous musical trends came and went, vocalist/bassist Andy McCluskey kept the band alive for 10 albums from 1978 to 1996. In 1996, McCluskey disbanded OMD for the duration of 10 grunge, Britpop and indie-dominated music years, reviving OMD in 2006 with its classic lineup. Vocalist/keyboardist Paul Humphreys and keyboardist/saxophone player Martin Cooper remained faithful to OMD for most of the journey, both before and after the hiatus. Current drummer Stuart Kershaw joined the band permanently in 2015 and completes the current OMD quartet. OMD has recorded three albums of new material since reuniting, the most recent being 2017’s The Punishment of Luxury.

OMD’s 2022 North American tour promotes the 2021 release of a 40th anniversary retrospective box-set, Souvenir. As such, the set at Brooklyn Steel featured songs from almost every OMD album, focusing heavily on the 1980s catalog. The selections were unified in tone by excluding some of the band’s more radical and experimental compositions. Instead, they majored in light, bouncy songs, some more accessible than others.

McCluskey worked the audience by singing at the edge of the stage and dancing during the instrumental breaks. Humphreys, Cooper, and Kershaw remained stationary along the back risers. Video projections behind the musicians displayed moving geometric shapes or quickly changing film clips that related to the song lyrics.

The show began with a video accompanying a pre-recorded track, “Atomic Ranch,” one of OMD’s more aggressive tracks, and perhaps one that might be difficult to recreate live. This was followed by the first live song, the cinematic, spacey “Stanlow.” As the show progressed, OMD  maintained a mostly mellow presentation, mixing tempos for the standing audience from slow sways to perky rhythms. The prevailing sounds switched from atmospheric ambience to gentle techno raves. Songs often started with a robotic riff and then were built upon with vocals, washes of electronic melodies, and solid percussion.

McCluskey sang the vast majority of the songs. About halfway through the main set, McCluskey and Humphreys switched positions so  Humphreys could take center stage and  lead vocals for “(Forever) Live and Die.” This was followed by “Souvenir,” which Humphreys sang from his keyboard station. OMD ended the main performance with “Enola Gay,” then returned for a three-song encore, “If You Leave,” “Secret,” and “Electricity.” The audience left remembering the four songs that were best known in America.

OMD’s concert remained true to its organic roots. Those who attended the concert experienced what was innovative in the mid-1980s. Electronic music has gone in many directions since then, including industrial, darkwave and techno, and the origins of those newer sounds could be traced to OMD during the performance. The question is whether OMD in the future will move away from light pop and venture into some of the evolving directions of electronic music.