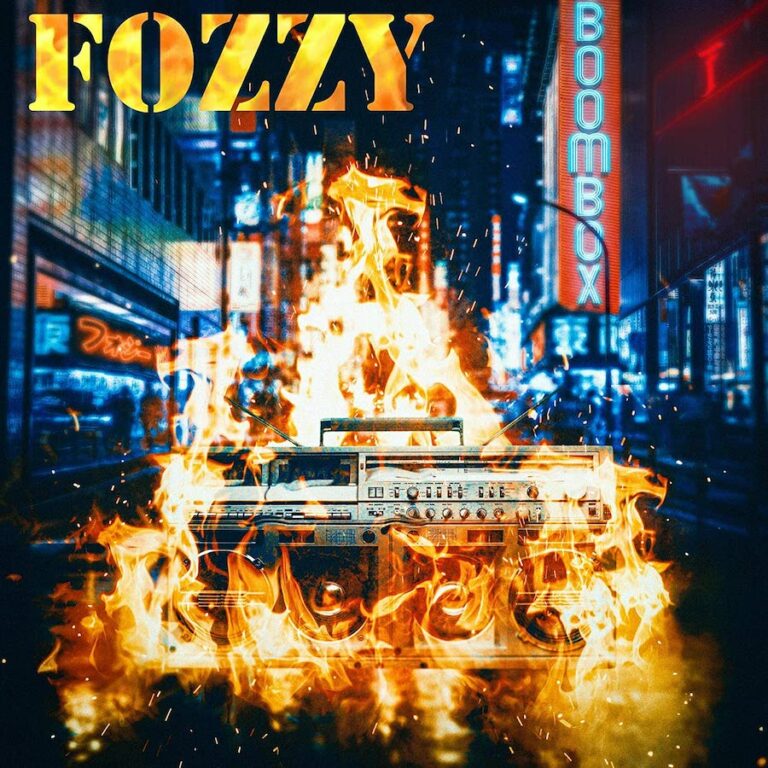 In recent news, Apple announced that the iPod is being discontinued. Luckily, there has been a resurgence of another portable music player. The perfect companion to blast through its speakers is the latest and greatest album from Fozzy, appropriately titled Boombox.

Boombox is a brand new, 12-track collection, Fozzy’s eighth full-length album, and was produced by Johnny Andrews and Rich Ward. Fozzy has transformed since their introduction in 2000. They began as a cover band and evolved into a group with songs rivaling the metal classics they paid homage to. The rhythm section may look different, but the current line-up of Chris Jericho (lead vocals), Rich Ward (guitar, vocals), Billy Grey (guitar), New Jersey’s own PJ Farley (bass), and Grant Brooks (drums) is cohesive and hard-hitting.

Boombox squashes you from the beginning with “Sane.” The last few years have been maddening at the very least and sometimes it’s better to be crazy. “Sane” was released in 2021 and it’s no surprise it became a chart-topper.

“I Still Burn” urges the listener to keep going no matter what challenges arise. Jericho explained that it’s “the story of the dreams, the passion and the fire that lies within all of us to be the absolute best we can be…and to do whatever it takes to achieve the goals that make our dreams come true. Lead guitarist Rich Ward added to this press release statement, “My entire career has been about pushing to the summit of the climb, never satisfied with boiling water with the Sherpas at Base Camp 2. I’ve been touring and making records for three decades, and I remain as passionate as ever. ‘I Still Burn’ is the story of the fire that fuels that passion. This is our story!” The song has a motivating message and it melts the paint off your walls at the same time.

“Purifier” is pure rock and roll – fun, catchy, and heavy. It’s one of the hidden gems on Boombox. The slow burn found on “Army Of One” spotlights Jericho’s vocal chops and gives meaning to the quote from Marilyn Monroe, “You believe lies so you can eventually learn to trust no one but yourself.” The fifth offering “Ugly On The Inside” features the familiar chant made famous by the cheerleaders in WIldcats with a much deeper meaning.

Up next, Fozzy takes on the iconic “Relax” by Frankie Goes To Hollywood. They don’t deviate too much from the original, but they do add a splash of metal. Don’t over analyze it too much, just enjoy the nostalgia. However, “Nowhere To Run” is not a cover. It is gritty and melodic. “My Great Wall” is profound and pulsating at the same time (“So brick by brick I built it up / To isolate, to shut them out / But cracks run deep inside this vault / Can you tear it down? / Tear down my Great Wall”). “What Hell Is Like,” “Omen,” and “The Worst Is Yet To Come” have a sonic edge and deliver the goods. Boombox closes with the most powerful of them all, “The Vulture Club.” This song leaves you wanting more. If this is the direction Fozzy is going for future material, I’m all for it!

Boombox is a good time, but the significant takeaway can be found by digging deeper and listening to the words. Regardless, Fozzy has secured a spot as one of the best in hard rock and heavy metal music.

BOOMBOX, THE LATEST RECORD FROM FOZZY, IS OUT NOW WHEREVER YOU LISTEN TO MUSIC!