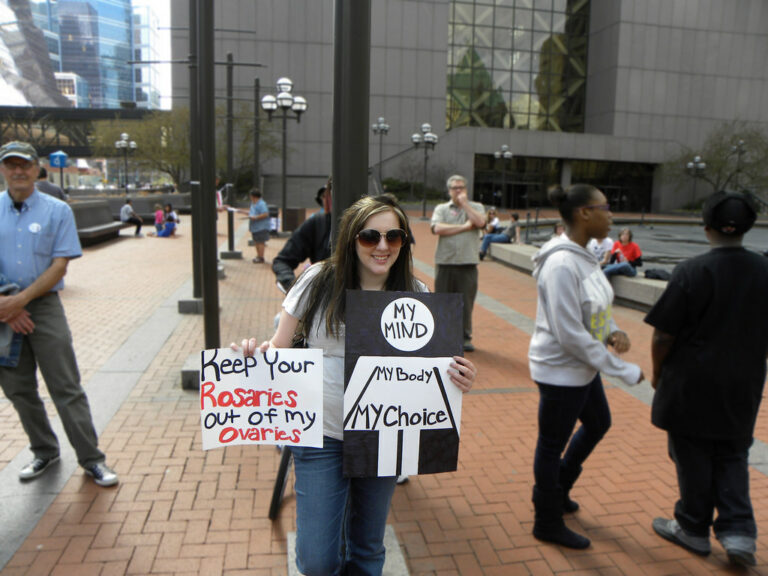 "Occupy Women's Rights - A rally to honor the many struggles for women's liberty" by Fibonacci Blue is marked with CC BY 2.0. To view the terms, visit https://creativecommons.org/licenses/by/2.0/?

Fans of my decade-plus pounding of these keys for Marriage Equality and years of calling for the expunging of Donald J. Trump from anything resembling the White House will get a huge kick out of the next few months. Because although I have touched on the issue of Roe v. Wade and equal rights for women before around here, and most recently this past December, things got real this past week when some enterprising American hero leaked what can only be described as the most heinous judicial attack on the personal liberty of the taxpaying citizenry yet. Get ready. This will be a continuing topic. When 51.1% of the populace have their bodies become the property of the U.S. government, it’s worth getting obsessed about.

None of this is surprising. This had been coming for some time, but really a deadlock certainty once the new “conservative judges” (we’ll get to that semantic clusterfuck later) took their places. No one with half a brain thought that when all three – Amy Coney Barrett, Neil Gorsuch, and Brett Kavanaugh – interviewed for the gig and claimed that Roe v. Wade was “settled law” it was remotely true. The man who appointed them, the aforementioned Trump, put out a litmus test that only “Pro Life” (a euphemism for allowing the government to fuck with a woman’s bodily functions) would be his picks. This was why Republicans held their noses to vote for this dink. Therefore, this is the entire point of them even being on the Court. It’s not like they were any good. The last guy was a drunk, and not even a good drunk, one that leans into you and smells bad and tells you about how he could have played centerfield for the Red Sox and then tries to grope your date.

The Religious Right (not particularly conservative) was allowed into American politics in the 1980s, because Ronald Reagan mistook them for lobbyists, and because, well, you know, Reagan. It’s been a fun ride ever since. They hijacked what was merely a fiscally conservative, warmongering racist organization and decided to go all-in on the culture wars tearing the mantle of conservatism from the likes of William F. Buckley and George Will and handing them over to southern charlatans like Jerry Falwell and Pat Robertson.

Falwell and Robertson were part of a long line of religious loons that have been trying to tell us what to do, how to act, how to dress, what art we can consume and how guilty we should feel unless we give them money for Jesus since the dawn of civilization. But we had an awakening here in the early part of the twentieth century and it made them nervous. Until the 1980s things were moving along nicely away from government-controlled human behavior rat science to a reluctant form of enlightenment. We called this period the 1960s and seventies, during which the idea that women should have control over their bodies became law, but even the 1980s would not kowtow to the medieval idea of enslaving women – nor did the nineties or the first two decades of this century.

Then this week a leak of Justice Samuel Alito’s draft opinion on the Dobbs v. Jackson Women’s Health Organization case challenging the constitutionality of a fifteen-week abortion ban in Mississippi emerged. In it, Alito becomes another justice ignoring the progress of rights in this country to myopically return the nation to the dark ages. “Until the latter part of the 20th century,” he writes in an enviably spectacular stupor reserved for the victims of blunt head trauma, “…there was no support in American law for a constitutional right to obtain an abortion. Zero. None.”

And before 1865, owning humans was legal. There was no constitutional right to obtain freedom for Africans stolen from their homeland to do our bidding for free. Zero. None.

Alito, who also voted against and wrote a bigoted screed against marriage equality seven years ago, evokes the word “abortion” here because he misunderstands the concept of the Fourteenth Amendment that grants protection to every citizen, even ones with vaginas, against “any state to deprive its citizens of life, liberty, or property.” The fundamental disconnect between abortion and property = body is at the heart of this. Alito, in essence, is granting the government the right someday to force abortions like in China.

Alito’s goofy “zero-none” nonsense is brilliantly framed from a woman’s perspective in a piece in the latest New Yorker that every American, male or female, who gives a shit about personal liberty should read. Titled “What’s Missing From Alito’s Decision to Revoke the Right to Abortion”, author/journalist Jessica Winter writes, “Alito is entirely correct that, in 1973, the Supreme Court was somewhat out of step with its time in codifying women’s rights. When Roe was decided, a married woman in the United States needed her husband’s permission to get a credit card, something that did not change until 1974. No state outlawed marital rape until 1975. No man was found liable for sexual harassment until 1977. Pregnancy was a fireable offense until 1978. Alito does not itemize forms of gender-based subjugation that persisted after Roe, many of which might be persuasively argued as ‘deeply rooted in this Nation’s history and tradition.’”

And all of it true.

This is why Religious Right Republicans – you can’t call these fascists conservatives anymore, it’s silly – are up in arms about Critical Race Theory. The truth is painful. The truth is messy. But, as the man says, the truth will set you free. Or at least set women free. But the truth is going bye-bye.

Granted, I am writing this from a comfortable seat of freedom from judicial tyranny here in New Jersey, where my wife and daughter reside. We have strengthened our right to exist free of government enslavement. This column merely points out that the threat to the Fourteenth Amendment for women’s rights against “any state to deprive its citizens of life, liberty, or property” is wrong and should not exist in a purportedly “free” country. However, currently 13 states are challenging this amendment by banning abortion after fifteen weeks, which may seem fairly reasonable to government-control freaks who are obsessed with its complete sovereignty over the bodily functions of its citizens, but all of those states have “trigger-laws” that kick in once this glaringly apparent Supreme Court ruling comes down, which grants state governments the complete power over the innards of over half of its public.

This statement and the ruling it precedes will effectively put all American women in the servitude of the federal government. There really is no other way of looking at this and calls into question contraception and the like. Because the ruling will not rid the nation of abortion – you can take an abortion pill for that anywhere. You don’t need a clinic or the drunk guy’s vote on the Court to get it. Abortions, just like the failed Drug War, is a pacifier for the Religious Right that will not curtail a single abortion, but it will affect women’s health care, and as stated here more than once over the years, the personal liberty of the female citizen. Also, this ruling will give rise to the attacks on contraception, another biggie for religious fanatics.

The one thing conservatives fear, government control, will be lasting and comprehensive once this all comes down in a month or so. To wit: Supposed conservative Mississippi Governor Tate Reeves, a Republican, recently told CBS News that with the felling of Roe v. Wade, “Each of those elected representatives can make the decisions that they view best for their constituents.”

Let me qualify the horrors of this statement and apply it to amendments you dig, like the First or Second Amendment: “Each of those elected representatives can MAKE THE DECISIONS THAT THEY VIEW BEST for their constituents.”

Making decisions they “view best for you.” Remember all those wusses who wouldn’t wear a cloth over their face for a few months, they now want the government to crawl inside the body of a woman for a lifetime.

In the coming weeks we will cover what this means for the 2022 midterms and the rest of our lives in voting booths, which has pitted the concept of America with one party that has chosen to dismantle personal sovereignty.