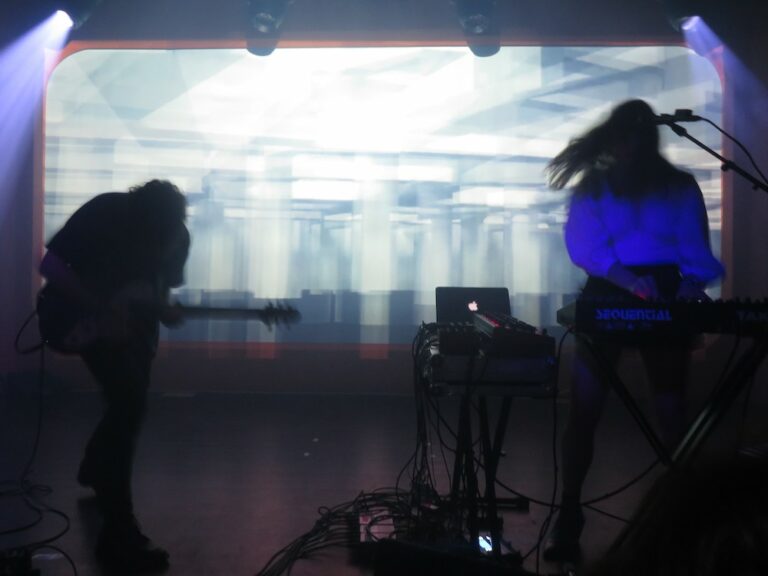 New York has a coterie of anglophiles who are vigilantly current with the rock scene in England. If an emerging band is generating a buzz in the British music publications, this audience will extend the benefit of the doubt and attend the band’s New York gigs. This meant that the KVB was guaranteed an audience of at least 150 in-the-know rockers when the band came to Brooklyn Made.

The KVB is Nicholas Wood and Kat Day, an audio-visual post-punk duo originally formed as Wood’s solo project in 2010 in London, England. A year later, Wood recruited Day, who was studying fine art, to play synthesizers and create visuals. The duo released its sixth album, Unity, on November 26, 2021.

At Brooklyn Made, the KVB played mostly in darkness, accompanied by Day’s bright swirling images on the large screen against the back wall. Wood sang in a deep voice and played a barely-heard guitar. The KVB’s electronic, post-punk, and shoegaze music was clever and eclectic, yet distant, dominated by Day’s wash of electronic layers. Some songs sounded like early 1980s synth-pop, except without the catchy choruses. Wood’s baritone vocals were more brooding; his lyrics largely indistinguishable, the vocals were more about texture than messaging. Other songs, darker in tone, leaned closer to Sisters of Mercy than Tears for Fears, for example.

The staging seemed entirely dependent on Day’s kinetic artwork on the screen. With few lights on the musicians, the brightness of the screen behind the musicians left the audience seeing Wood and Day mostly as silhouettes. The audience only saw the musicians’ faces in an instant when a random light passed them. Wood and Day seldom lifted their heads or opened their eyes to engage the audience. The few spoken words were rather impersonal. Their stage presence was zero, as icy and aloof as Day’s visual art.

The KVB has the potential to gain a larger American following than the local anglophiles, particularly in goth and darkwave circles. These audiences will be mesmerized by the ghostly, experimental sounds that were the crux of the KVB catalog. To help audiences bond with them, however, Wood and Day will need to improve basic important marketing tools, like performing under spotlights to become visible and energizing the audience with stage dynamics.