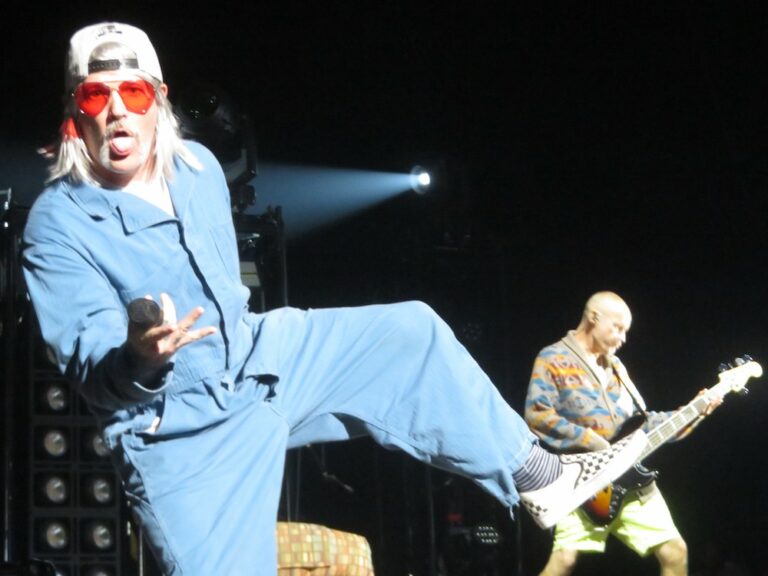 Fred Durst is in on the joke. The rapper started Limp Bizkit when he was 24 years old and now he is 51 years old, which means he has spent the second half of his life leading a nu-metal band that has been both loved and also made the butt of endless jibes and criticism. Limp Bizkit’s sixth and most recent studio album, released on Halloween, is entitled Limp Bizkit Still Sucks and the lead single, “Dad Vibes,” is a cryptic yet satirical rap on being a middle aged rocker. If Limp Bizkit is going to be a laughing stock, Durst is the perpetrator, not the victim.

At Madison Square Garden, following a series of half-hour sets by hardcore Scowl, electro-punk Wargasm UK, and rapper $not, a giant inflatable of a woman smoking a cigarette and vacuuming appeared on stage, similar to the image on the band’s most recent album cover. The house lights dimmed and the audience saw Durst alone, sitting under the spotlight in an arm chair, wearing baggy mechanic overalls and red-tinted aviator sunglasses, with grey hair hanging from under a backwards baseball cap. He told the audience that he had been feeling unwell that day.

“So I had the doctor come and interrupt the Rangers game,” said Durst. “He says I don’t have COVID.” The audience responded with a roar. According to Durst, the doctor proposed that Limp Bizkit postpone or cancel its performance. Durst opted to fulfill the band’s commitment to the engagement. “Turn it up, Lethal,” Durst shouted way above him to the band’s turntablist, DJ Lethal, on a towering platform. “The show must go on!” shouted Durst.  Together, Durst and Lethal launched into “Dad Vibes,” with the rest of the band members (guitarist Wes Borland, bassist Sam Rivers, drummer John Otto) coming on stage one-by-one to help complete the song.

Continuing with puzzling yet self-deprecating lyrics from the new album, Limp Bizkit followed with two more songs from the new album, “Out of Style” and “Dirty Rotten Bizkit,” before turning to the archives. With the exception of a cover of Rage against the Machine’s “In the Name of” towards the end of the show, the rest of the set consisted of songs from the band’s two breakthrough turn-of-the-century albums. Limp Bizkit performed seven songs from 2000’s Chocolate Starfish and the Hot Dog Flavored Water and three songs from 1999’s Significant Other.

Despite his alleged illness, Durst’s vocals and energy level were in fine shape. Borland, dressed in a white suit and white face makeup under a black long-beaked mask, played crunching riffs; Limp Bizkit’s rap-metal style does not permit him to solo much. With the mellowing of age, Durst did not sound as angry or anxious anymore, but the booming metal music behind him remained as abrasive as ever.

At the beginning of the performance, Durst announced that Limp Bizkit does not do concerts; instead, he said, the band throws parties. The night consisted of much more than musicians playing instruments. Durst invited a fan from the audience to sing “Hot Dog” with him. DJ Lethal occasionally played snippets of classic pop records between Limp Bizkit’s songs. Comedian Jon Carnage, under an alias, interrupted the show long enough for Durst to grab him by the back and rip off his clothes. A man wearing a tutu came on stage to dance to “Nookie.” Durst twice mentioned that the venue had a strict curfew, but he spent a lot of time talking between songs, such that the band shortened “Re-Arranged” and “Take a Look Around” and eliminated “Gold Cobra” from the planned set.

Limp Biskit is a veteran band that delivered on what it promised. Durst and company succeeded in bringing on the party. For all of its newfound “dad vibes,” Limp Bizkit is aging well.