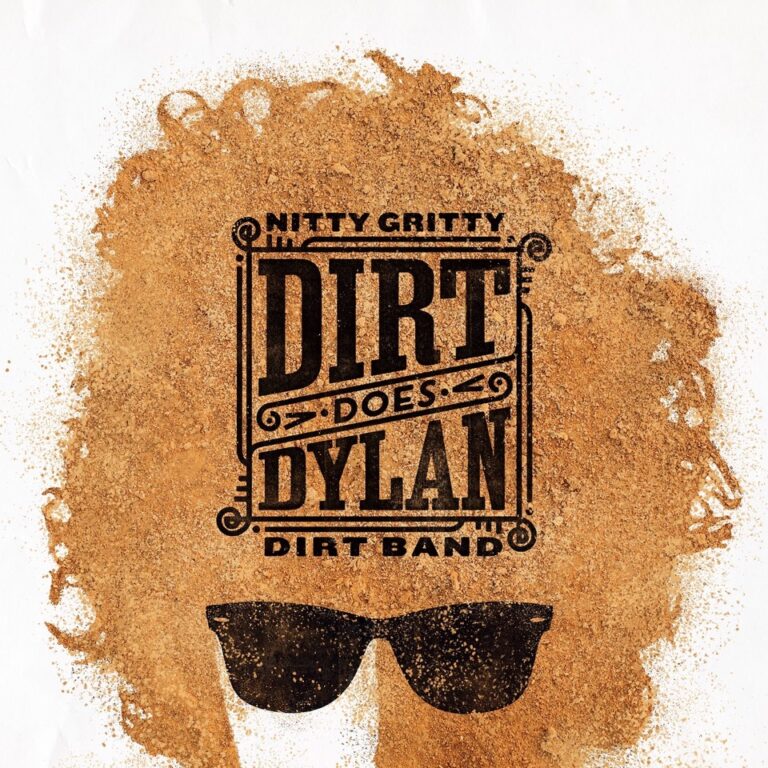 Nitty Gritty Dirt Band, Dirt Does Dylan. The Nitty Gritty Dirt Band recorded versions of Bob Dylan’s “You Ain’t Goin’ Nowhere” on 1989’s Will the Circle Be Unbroken, Vol. II and 2006’s Circlin’ Back: Celebrating 50 Years. Now, with the thoroughly enjoyable Dirt Does Dylan, the group joins the long list of artists who have devoted a full album to his sterling songbook.

While Dylan tribute CDs by such artists as Chrissie Hynde and Lucinda Williams have included deep album cuts and relatively recent material, the Dirt Band sticks to some of the best-known (and most-covered) numbers from the master’s early releases. The program embraces Nashville Skyline’s “Tonight I’ll Be Staying Here with You” and Country Pie,” The Freewheelin’ Bob Dylan’s “Girl from the North Country” and “Don’t Think Twice, It’s All Right,” Bringing It All Back Home’s “She Belongs to Me,” Planet Waves’ “Forever Young,” Highway 61 Revisited’s “It Takes a Lot to Laugh, It Takes a Train to Cry,” and the title track from The Times They Are A-Changin’, which finds singers like Rosanne Cash and Steve Earle chiming in. Also on the CD: “I Shall Be Released,” which features guest duo Larkin Poe, and “Quinn the Eskimo (The Mighty Quinn).”

This isn’t exactly what you’d call a surprise-filled song lineup, but the Dirt Band – which introduces three new members here and has remained consistently excellent over half a century despite numerous personnel changes – does justice to every composition.

Banditos, Right On. On the Nashville-based Banditos’ previous two albums, Mary Beth Richardson shared lead vocal duties with two of the group’s male members. This third album, though, follows the quintet’s decision to put her in the spotlight on every cut. Smart move. Richardson is a fantastic singer – a bit like Lone Justice’s Maria McKee but (sorry, Maria) even better.

On songs like “On My Way” (the CD’s first single), “The Waves,” “Here Tonight,” and the soulful title cut, her vocals radiate personality and intensity. The rhythmic, infectious material on Right On is just as robust as Richardson’s delivery, and so is the band, which includes two guitarists, a bassist, and a drummer. If this album doesn’t move Banditos into the big leagues, I don’t know what will.

Bryan Ferry, Love Letters. Roxy Music, which has scheduled a 50th anniversary reunion tour for this fall, stuck almost exclusively to original material throughout its career, most of it penned by lead singer Bryan Ferry. On his solo outings, though, Ferry has often turned his attention to covering pop and rock classics.

You’ll find four of the best of his interpretive efforts on this EP, which in addition to “Love Letters,” the 1962 Ketty Lester hit, features Elvin Bishop’s 1976 smash, “Fooled Around and Fell in Love”; Dusty Springfield’s “I Just Don’t Know What to Do with Myself”; and Ray Noble’s “The Very Thought of You,” which has previously been recorded by artists ranging from Nat King Cole and Frank Sinatra to Rick Nelson and Elvis Costello. Atmospheric instrumentation that at times recalls Avalon-era Roxy combines with Ferry’s distinctive quavering vocals to make you wish the fun didn’t end after a mere 14 minutes.

Heidi Talbot, Sing It for a Lifetime. Irish folksinger Heidi Talbot recorded this affecting album while she was splitting with her husband of 11 years, and you can hear echoes of the divorce experience throughout – not just in originals like “I Let You Go,” but also in the well-chosen predominant covers. In fact, the music and lyrics exude so much openness and vulnerability that by the end, you have a pretty good idea of why the marriage failed and how the singer feels now: a mixture of fear, excitement, melancholy, and optimism.

Talbot’s voice sounds a bit like Cyndi Lauper’s but the comparison ends there: The arrangements, vocal approach, and strings-spiced material on Sing It for a Lifetime are moody and contemplative. Standouts include Leonard Cohen’s “Famous Blue Raincoat,” Dolly Parton’s “When Possession Gets Too Strong,” Bob Marley’s “She’s Gone,” and Willie Nelson’s “There You Are,” which was written by Kye Fleming and country music artist Michael Reid. Also: “Empty Promise Land,” by Dirk Powell, who produced the album and duets with Talbot on the song, which features Mark Knopfler on guitar.

Still, this two-CD release stands out. It preserves previously unissued 1992 concert material from a recently relaunched band that was launched in the early 1980s by guitarist Steve Kimock and drummer Greg Anton. The pair – who had earlier played in a group led by Grateful Dead alumni Keith and Donna Godchaux – are joined here by Jefferson Starship’s Pete Sears and a handful of other musicians, including several who are no longer with us, such as the ubiquitous pianist Nicky Hopkins and the saxophonist Martin Fierro, whose credits included work with Jerry Garcia and Quicksilver Messenger Service.

The jazz-influenced hour-and-a-half-long Naught Again includes two songs with words by the late Grateful Dead lyricist Robert Hunter (who introduces the band to the stage), as well as covers of the Who’s “Baba O’Riley” and Jimi Hendrix’s “Little Wing.” Expansive Zero-penned instrumentals dominate the set, however, and they’re gems. Start with “Tangled Hangers” and “Cole’s Law”—two of the four numbers here that hit or exceed the 10-minute mark – whose ecstatic heights approach those offered by the Grateful Dead’s “Dark Star.”

May Erlewine, Tiny Beautiful Things. Michigan-based May Erlewine’s latest album borrows its title from a Cheryl Strayed book in which the author offers empathetic replies to a series of emotionally suffering strangers. Similarly, the singer delivers wisdom to her listening audience about the power of love and other emotional connections.

The credits list more than a dozen musicians playing instruments ranging from sax and electric guitar to cello, violin, and flute, but the performances – which at times feature little but Erlewine’s soothing vocals and piano – are much more understated and quieter than the personnel list would suggest. This is a sweet and thoughtful folk-pop – just the right medicine for a rainy afternoon when you’re home alone with a glass of wine and a lot on your mind.