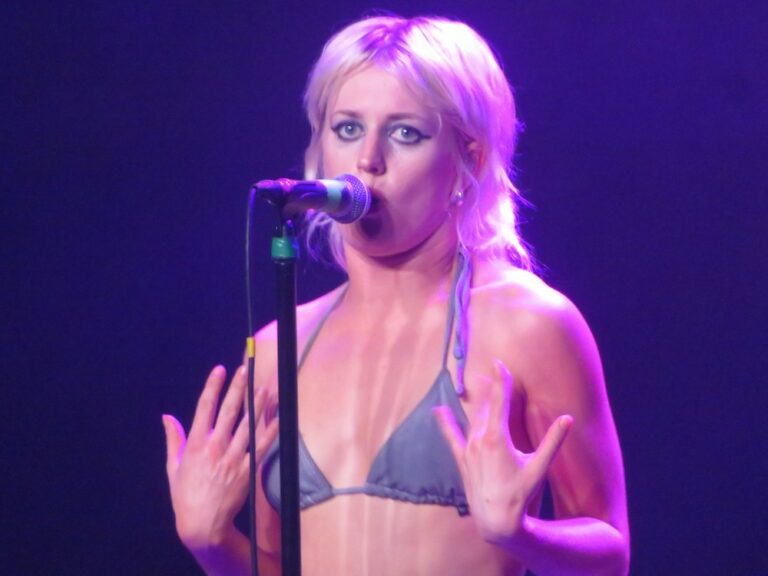 Formed in 2016 in Melbourne, Amyl and the Sniffers presently consists of vocalist Amy Taylor, drummer Bryce Wilson, guitarist Dec Martens, and bassist Fergus Romer. After releasing two EPs, the band released a self titled debut album in 2019, which that year won Best Rock Album in Australia’s ARIA Music Awards. The quartet released its second studio album, Comfort to Me, on September 10.

Strong performances like the show at Brooklyn Steel  surely will generate more positive word of mouth about the band. Amyl and the Sniffers revived raucous 1970s punk rock rather than the more mainstream pop punk that has been more prevalent since the late 1980s. Advancing beyond the primitive, muddy sound of the band’s first-wave forbearers, the sound was clean and crisp, yet just as bombastic and dynamic as the early British punk catalog.

Amyl and the Sniffers performed nine out of the 12 songs found on the most recent album, about half of the first album and one song from each of the two EPs. The momentum of most of the songs was lightning fast, and Taylor fueled the engine by alternately talking and shouting her lyrics rather than singing. Every song was a barn burner, and the flames never dissipated because the songs were played with only a momentary breather separating them. The breaks were so short that members of the audience continued the moshing and crowd surfing even between songs.

Amy Taylor is a petite woman, but give her a microphone and a stage and she is a human hurricane. Dressed in high boots, electric blue hot pants, and a bikini top for most of the show, Taylor was absolutely magnetic as she athletically paced, head-banged, and gyrated across the stage. Her stage presence was so enthralling that she stole the thunder from Martens, who gave the music its drive and did most of the heavy lifting with drilling, searing guitar leads, riffs, and fills. Romer and Wilson did a fine job backing Martens’ powerful guitar work, but did anyone notice? Taylor commanded so much attention that the musicians could not help but play the background.

The band exhibited a sense of humor as well. From “Freaks to the Front” near the beginning to the main set closer, “Some Mutts (Can’t Be Muzzled),” what few lyrics were discernible were silly. (“You got a new dog, do you remember me?” Taylor asked in her thick Australian accent. “Woof, woof!”) The set included no emotional or confessional songs. Amyl and the Sniffers instead led an explosive rock and roll party. It is no wonder that the band is getting so popular so quickly.