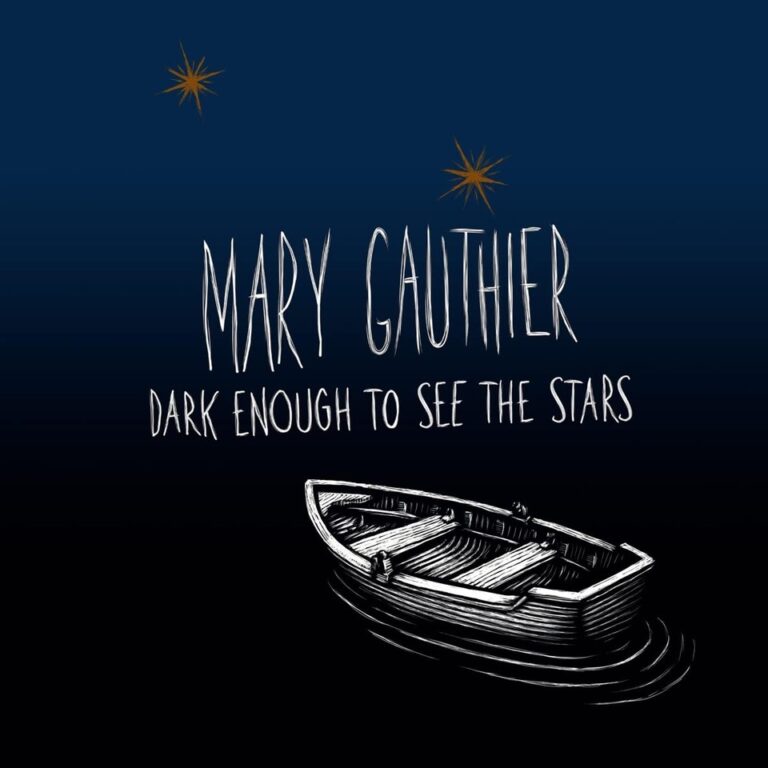 When Nashville-based Mary Gauthier appeared on Hulu’s I Love You, America a few years ago, host Sarah Silverman noted that one of her staffers found the folk singer-songwriter’s music so depressing “she had to listen to Morrissey to cheer up.”

It’s true that Gauthier’s albums have reflected her difficult life experiences – including abandonment by her mother when she was a child, struggles related to being gay, and years of alcohol, cocaine, and heroin addiction. Moreover, there are sad songs on the new Dark Enough to See the Stars, including “How Could You Be Gone,” which reportedly concerns the loss of such friends as John Prine and Nanci Griffith.

However, this heartfelt new recording – which draws its title from a Martin Luther King, Jr. quote (“only when it is dark enough can you see the stars”) – finds Gauthier in a hopeful place. Yes, it’s a “Fall Apart World” (the title of the opening track), but that number includes lines like “I’ve got my love beside me, and I am finally home.” And in the similarly upbeat “Amsterdam,” which limns a night in Holland, Gauthier sings about having “everything I’ll ever need.”The artist – who wrote or co-wrote all the material – sounds as if she has achieved a peaceful state, and these moving, well-sung songs explain what that means to her.

Neilson Hubbard – who ably produced this album as well as Gauthier’s Grammy-nominated last record, 2018’s Rifles & Rosary Beads – plays drums on most of the tracks. Among other participants are Nashville-based songwriter Ben Glover, who co-wrote four of the songs and sings backup on one of them; Allison Moorer, who adds vocal support on three selections; and the always-wonderful Fats Kaplin, who usually plays fiddle but here offers pedal steel on four numbers and viola on two.

An Anniversary Edition of a Coltrane Classic

My Favorite Things, which first appeared in early 1961, brought John Coltrane to a wider audience with its inventive, expansive versions of four standards: the title track, which Oscar Hammerstein and Richard Rodgers wrote for The Sound of Music; Cole Porter’s “Ev’ry Time We Say Goodbye”; and George and Ira Gershwin’s “Summertime” (which garners an unusual up-tempo reading) and “But Not for Me.” Playing tenor sax as well as his then recently acquired soprano sax, Coltrane reinvents all of these numbers with the help of his new, soon-to-be-famous accompanists: McCoy Tyner on piano, Elvin Jones on drums, and Steve Davis on bass.

A new 60th anniversary two-CD edition (which in fact arrives 61 years after the original) features remastered audio and adds a recently rediscovered mono mix as well as fresh liner notes by Ben Ratliff. Those bonuses may not be enough to justify an upgrade if you already own this LP, but if you’re a Coltrane fan and for some reason don’t have it, you should grab the new release. My Favorite Things could well become one of your favorite things.

Charlie Musselwhite, Mississippi Son. When you think of Mississippi-born bluesman Charlie Musselwhite, you probably conjure up his harmonica work, which has been featured alongside the music of electric blues bands on dozens of albums since the 1960s. Mississippi Son is different, though. A rhythm section weighs in on some tracks and Musselwhite plays some harp, but this is laid-back Delta blues, with an emphasis on his acoustic guitar and personality-rich vocal work. Musselwhite originals dominate the consistently excellent 14-track program, which also includes covers of such numbers as the Stanley Brothers’ “Rank Strangers,” Charley Patton’s “Pea Vine Blues,” and Joe Williams’s “Crawling King Snake.”

Edie Carey, The Veil. Edie Carey says she wrote the title track of this album after she and her kids were involved in a serious car accident that reminded her of “the thin shroud of security we want to believe we have between us and danger and how disturbing it is when that shroud is suddenly torn away.” But the Colorado-based singer soon realized that the veils theme applied to other songs she had written and would write about the complexities of marriage, the line between life and death, and the “opaque space between who we are and who we’ve been.” She explores such topics throughout this thoughtful and frequently powerful album, where her fine vocals, acoustic guitar, and occasional piano are accompanied by a coterie of musicians playing electric guitar, cello, viola, mellotron, bass, organ, synthesizers, piano, and drums.

Michael McDermott, St. Paul’s Boulevard. Chicago-based singer, songwriter, guitarist, and pianist Michael McDermott doesn’t mine particularly fresh territory on St. Paul’s Boulevard, but what he lacks in innovation he makes up for in hooks and ear-candy instrumentation. All 15 tracks on this album – most of which qualify as anthemic rockers – deliver passionate, gravelly vocals, catchy melodies, and an insistent beat. Best cuts include “Sick of This Town” and “Dead by Dawn,” both of which seem influenced by Bruce Springsteen; “Our Little Secret,” a propulsive number about lust; and the album-closing, atypical “Paris,” a sweet love song where McDermott slows the pace a bit and features acoustic instruments.

Laney Jones, Stories Up High. Laney Jones cranked out her first three albums between 2013 and 2016, reportedly spending only about a week in the studio on each. By contrast, she took her time with this fourth CD, assembling the tracks during several sessions in 2018 and 2020. The songs—one co-written, the rest solely by Jones—are dreamy, richly textured, and engaging, and her expressive vocals are terrific: just consider the stylistic range required to jump from a soulful, atmospheric number like “Can’t Stop the Rain” to the delicate folk-pop of “One Fine Morning.” If you gravitate toward such artists as Laura Nyro and Rickie Lee Jones, give this album a shot.