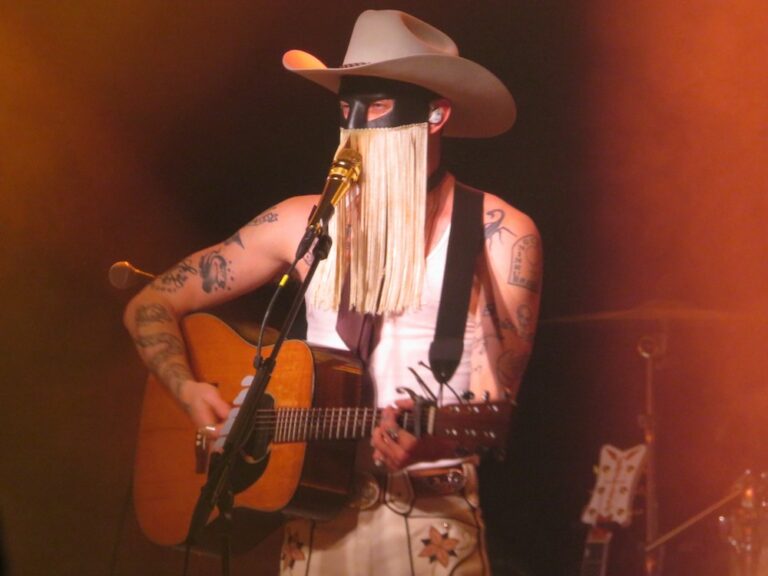 Orville Peck is a most unlikely country music artist. Contrary to country music’s longstanding traditions, Peck is gay, he is from South Africa, and he resides in Canada. He is a man of mystery, cautiously guarding details of his life in interviews and never revealing the face behind his Zorro-like long-fringed mask. Despite these unorthodox beginnings, Peck is country music’s fastest rising star.

At Brooklyn Steel, cowboy hats were heavily peppered throughout the audience. Most of the hats looked like they were purchased from a party store rather than a traditional hat shop. Many in the audience also wore fringed face masks. Orville Peck has a colorful cult following that launches a party even before he struts on stage.

Onstage at Brooklyn Steel, the dapper Peck and his musicians embraced the rhinestone cowboy look, and, yes, they all wore cowboy/cowgirl hats. Once the performance began, Peck’s talents superseded his novelty. His rich baritone vocals soared, hitting and holding notes impressively. His songs embraced classic country sounds, often with ironic storytelling lyrics. Peck’s set featured nine songs from his second and most recent album, Bronco, which he released on April 8. He also performed several songs from his debut album and his EP.

Most impressively, Peck was an outstanding stage performer. Under bright lights, he amplified the high points of his songs with larger-than-life rock star moves. Between high-kicks and long strides that swayed the fringes of his face mask like hair-spinners at a metal concert, he shot closer to his musicians to rock out with them. Between songs, he engaged the audience by sharing unfiltered anecdotes about the songs he was about to perform. When he retreated from the microphone, he allowed his musicians to shine, particularly guitarist Bria Salmena, the charismatic cowgirl on his right. He sang Gram Parsons and she sang Emmylou Harris on “Ooh Las Vegas,” the only cover song of the night.

Peck has all the makings of becoming country music’s next mega-star – strong vocals, solid original songs, and a tremendous flair for showmanship. He also is rocking the bedrock of country music traditions. How long will the “man of mystery” be a curiosity? The gimmick will serve to attract initial attention, but he also is blessed with enough musical talents to outlast the novelty.

(Spoiler alert: rock and roll detectives have connected Peck with Daniel Pitout, the drummer of the Canadian punk band Nü Sensae, based on the similarity of Peck’s tattoos and scraps of information that run parallel to both identities.)