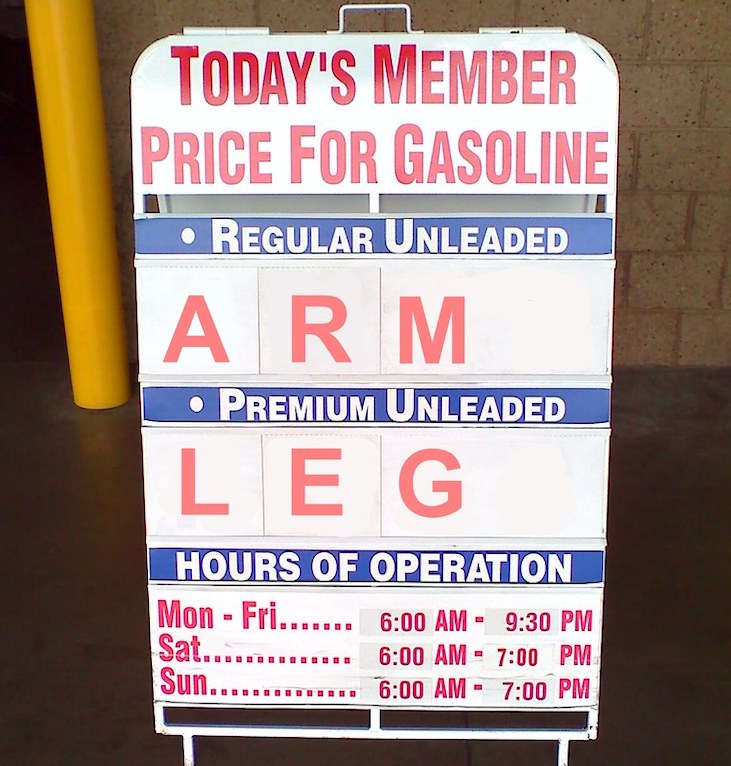 "Making Fun of Gas Prices" by AgentAkit is licensed under CC BY 2.0. To view a copy of this license, visit https://creativecommons.org/licenses/by/2.0/?ref=openverse.

Reality Check: The Cost of Inflation

I have been clear here for decades that I am not an economy writer. I have no fucking idea what drives national or global economics. Except for a very small group of humans I know (I’m looking at you, my bro-in-law, Thomas), this is the default for most of us. Especially in a hardcore capitalist construct, the most important thing that effects our ability to stay alive – food, home, utilities, stuff – is one big mystery. One thing that is not a mystery, and should be understood by the voting public, is how the economy affects politicians in power. Sure, it is only part of the story of political success, but when something as dramatic as the current state of national and global inflation is right now, it becomes the whole story.

On a national level, the Democrats hold power in Washington D.C. Many of these members of the U.S. Congress and the Senate, particularly our president, who has been around for 200 years and in politics for a cool century of so, should realize that with these outrageous prices on household items and especially gas, because, ya know, we go to war over gas prices around here, that the stank of all this is on them. The nuances of a recovery from the disasters of 2020, solid job reports, and a robust economic recovery in the technical is meaningless. The mere fact that things are just as bad in almost every industrialized nation on planet earth right now matters little.

Again, we don’t know how any of this really works.

To wit: Both strictly private-sector based economic theory and government-manipulated economic theories have both been debunked over the centuries – many, many times and to disastrous results. Yet even people we pay to figure this shit out have zero idea what the hell just happened. Did I hear that several members of the Fed and economic advisors to our government admit they did not see this coming? Shit, the Wall Street Journal, the running Bible on capitalism just ran an op-ed that they are shocked.

One thing we absolutely know right now is that something has gone awry. No one should be paying over $11 for a jar of marinara sauce. And it would seem for Joseph R. Biden Jr. and his party’s chances of staying in power, high prices and confusion on how it gets there means big trouble.

orget the fact that the whole Biden presidency has been mostly a bust. His approval ratings are in the tank. He cannot get anything through a legislature he owns and he appears to be out of it most of the time. I am glad he beat the last guy, who is a psycho lunatic anti-Democratic weirdo TV asshole. But at some point, we must come to grips that even though we needed the white old guy to convince the winy, racist, backwards states to boot that bleating thug, he has sucked ass at this. And, again, I am not necessarily putting the complete blame for the largest inflation numbers in four decades on the president, but this is how things work. And Joe knows this. If he doesn’t, then we have larger issues with this president that will have to be dealt with in another more agonizing column.

Look, first-term mid-terms are ugly anyway, but this is shaping up to be a slaughterhouse in November. No one should be surprised by this. Granted, there are massive issues on the table right now that could ameliorate the carnage – starting with thrice-daily mass shootings and the striking down of Roe v. Wade, which will put 51% of the electorate in bodily servitude to the federal government. But if eggs and gas and stuff are still ridiculously expensive, then you can be assured that people – even women – will bag freedom and the life and limb of grade-school kids to change the narrative.

And, of course, since we know nothing about the economy, it will likely not change. Republicans, who should absolutely run on how crazy this inflation has been now for nearly a year, routinely tell us it is the private sector that decides these things not the government. But, as they run to be in said government, they will chuck this concept to lay the blame at the feet of the party in power instead. And again, I agree whole heartedly with this tactic. It is just disingenuous. But who cares about that shit? No one knows what that word means – especially in D.C.

All is fair in a love and war. The basic premise of the 2022 mid-terms right now lies in the generic ballot polls. Republicans currently lead this by 2.2%. Considering that polling has been rather generous to Democrats over the past six election cycles, this ain’t a good sign for them. Biden, for instance, had a solid ten-point advantage over Donald J. Trump in 2020, and only won by 3%. If anything, Biden, should have been wondering what the fuck happened that November. In a normal year, a 2.2% lead for Democrats would be a dire warning sign for them. This number, combined with Biden’s dismal 40% approval rating, is a recipe for ass-whup.

Seeing how I am writing this in the first full week of June, there is only five months for this economy to be something that won’t crush the party in power. That won’t happen. Roe v. Wade is going bye-bye, and that might shift the balance of power in states where voters want to protect it. The number as of this morning for pro-choice is 68% of Americans. That counts for something. Sure. And if this summer is going to get bloodier – at least schools are out in a few weeks, so there will be less children to gun down – the gun issue will certainly hurt Republicans. But, again, none of this matters as much as the pocketbook. Never did. Never will. The American Revolution. The Civil War. Civil Rights. All of this was about money.

That much we do know.

James Campion is the Managing Editor of The Reality Check News & Information Desk and the author of “Deep Tank Jersey”, “Fear No Art”, “Trailing Jesus”, “Midnight For Cinderella“, “Y”. “Shout It Out Loud – The Story of KISS’s Destroyer and the Making of an American Icon”, “Accidently Like a Martyr – The Tortured Art of Warren Zevon”, and out now, “Take a Sad Song… The Emotional Currency of “Hey Jude”.