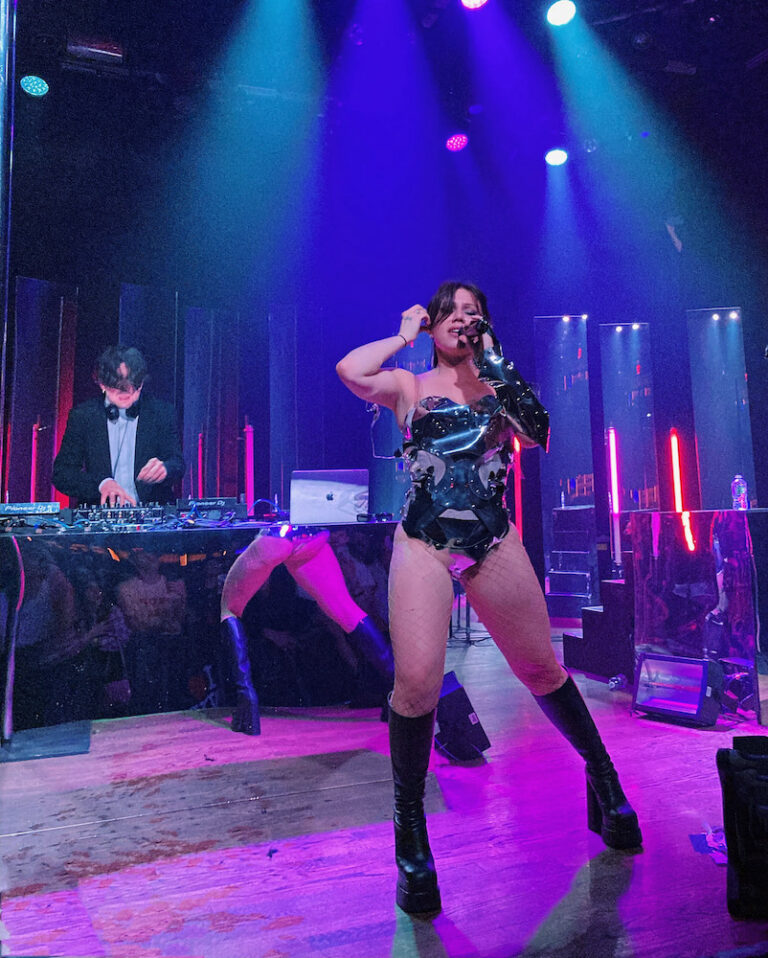 In the ever-so-saturated realm of pop music, where even the sharpest song hooks can drown and be forgotten in a matter of days, only the most striking artists can take some respite with their heads above water. Slayyyter, on the other hand, is miles above in the clouds writing some of the fiercest, most confident, and compelling music ever since someone could run GarageBand on their laptop and upload onto SoundCloud.

Without a doubt, Slayyyter is one of the most important pop stars to warrant your attention right now. As she concludes the North American leg of her tour following the 2021 debut record, Troubled Paradise, at a sold out Irving Plaza in New York on May 26, the future is ever expanding for the expressive 25-year-old star.

Slayyyter has developed an icon status in gay and “Slay” culture for her audacious lyricsm and seamless internet presence. What makes her such a powerful figure in these cultures, and why it’s hard not to like Slayyyter (or at the very least respect her), is that she has genuinely come from self described humble beginnings. From a working class family in Missouri, Slayyyter (real name Catherine) never had any artificial connections to the music industry and stardom. Before finding success and being able to survive off of making music, she was working as a receptionist at a hair salon. She, like so many others of her generation, was on Twitter talking about the music and the acts that inspired her; Britney Spears, Lady Gaga, even Heidi Montag. It was on Twitter where she made her connection with collaborator Ayesha Erotica and was able to officially release her debut single “BFF.”

A final introduction about Slayyyter comes best from another fan who was waiting in line as she walked into Irving Plaza with a small crowd gathering around her. A passerby asked who that was. The response, “That’s Slayyyter, she’s like an indie Britney Spears.”

The stage consisted of mirrors everywhere you looked, from the standing row of them acting as the backdrop to the one fronting the DJ table, and a small staircase fronted by another. On either side were dance poles that Slayyyter would use strategically during the set. Serving as her touring DJ was Owen Jackson, who earlier this year released a remix of “Clouds” on the Inferno Euphoria EP as well as co-produced the single of hers, “Stupid Boy.” As for Slayyyter herself, she had three outfit changes which ranged from a feathered black coat with a see-through top covered in silver gems, to a ‘fit that was almost Mad Max-esque… if the leather were replaced by an array of metallic pieces.

As the introductory hype song concludes and the foreboding, distorted, growling bass of “Self Destruct” began, Slayyyter presented herself on the stage with back lights framing her as she took in the crowd. A voice plays a greeting “Welcome to Club Paradise” rang out. “Self Destruct” was an incredible opening choice, both on the record and for the performance in New York. The chorus is one of the best representations of what being in a futuristic nightclub fever dream would be like, its apparent that club culture is a big inspiration for Slayyyter.

Of all the collaboration songs that she has, the previously noted “Stupid Boy” hits the hardest – almost literally. It’s a song co-written by her boyfriend, Colin Martin, featuring dance club synth stabs and New Orleans bounce hip-hop pioneer, Big Freedia. While Freedia wasn’t there to perform, her rap verse is still so incredibly fun to sing with the crowd playing the part. “You talk a big game, I’ll call your bluff / You blabalabalaba, won’t shut the fuck up!”

What helps make Slayyyter’s music so great is just how fun it is. On tracks like “Venom” where she sings “I like to serve, I’m a server” or on “Throatzillaaa” where based on title alone you can imagine where the song goes, there’s never a dull moment. “Throatzillaaa” in particular sounded spectacular live, it’s a song that only she could pull off. What could otherwise be misconstrued as something silly is elevated to the next level with Slayyyter’s pure gravitas and experiencing it live is another world altogether.

Even an unreleased track was performed entitled “Hollywood,” a driving, thumping ode to Slayyyter’s love of Los Angeles and its own specific culture. It features a grimy, pulsating bass over a synth that Slayyyter indulges in with “I wanna die at the Chateau / I wanna take you to mine.” Certain songs also had some minor reworks, such as on “Dog House” where in the post-chorus repeating vocal cuts were added to intensify the track. The crowd ate it up, deservedly so.

Topping off the set was “Letters.” It’s a step back from the club bangers and hyper-pop choruses, instead being a semi-stripped back number where Slayyyter sings about love and reassurance in her relationship. The crowd reinforced the performance with their phone lights swaying in on beat. One of her biggest hits, “Mine,” closed the set with an encore as it’s marked with its iconic 808-snare fill as the intro. It’s another example of how well Slayyyter’s writing melds with the tracks from the wide array of producers she works with. “I fell in love / First date, but boy, you know it’s not enough” starts the classic dance rhythm chords with a building electro drum beat that inevitably feeds into the pounding chorus “Oh me oh my / I wanna make you mine.”

No matter what connections an artist has or doesn’t have, they can still produce excellent music. Though, it’s undeniable the power that ‘do-it-yourself’ attitudes have over people. In an era in which anyone can upload their music to masses of people, so many great acts have sprung up where even 10 years ago they couldn’t have. It’s empowering to have working class artists find success by forming their own connections, it’s how hyper-pop and its adjacent genres thrive, why those genres are the refreshing take that we all need on pop music. There’s an amazing array of artists who capture this sentiment, and Slayyyter is one of them.