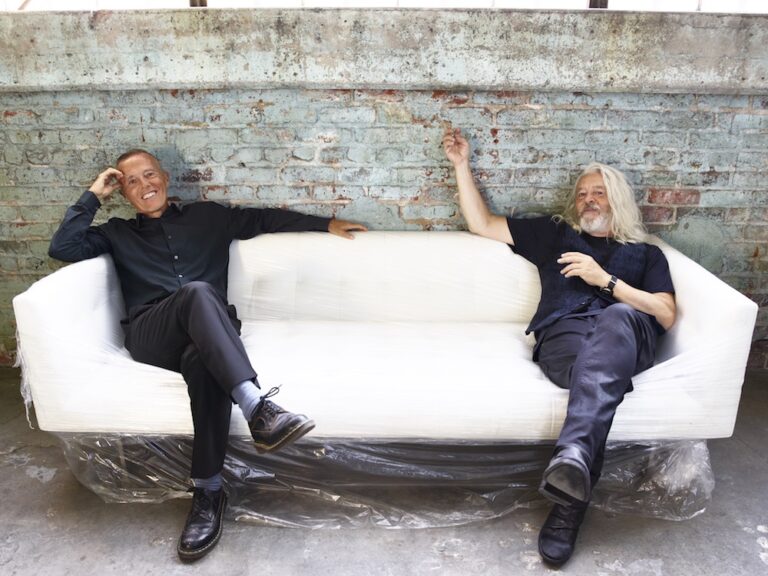 They say timing is everything, and that rings true for everyone, even the most significant and established of artists. Tears for Fears (and their upcoming local tour dates) are a perfect example of such.

Tears for Fears have always been more thoughtful – and thought-provoking – than typical pop bands, as they first proved nearly 40 years ago with international hits such as “Mad World,” “Shout,” “Everybody Wants to Rule the World,” and “Head Over Heels.” With their seventh studio album, The Tipping Point (released in February via Concord Records), they take this contemplative lyrical approach even further. It is a highly personal album for vocalist/guitarist Roland Orzabal, who wrote many of these songs after a particularly grueling time in his life when his wife of more than 30 years, Caroline, passed away in 2017.

“The experiences that The Tipping Point expresses are universal,” says Orzabal during a recent call from California. “Grief is something that pretty much everyone experiences at some point in their life. I think that’s why we love music, because language sometimes is a stuttering form of communication. We don’t quite fully understand what people are saying when it’s just spoken language because there’s so many nuances. Whereas with music, it bypasses the judgmental part of our brain and goes straight into our heart.”

The Tipping Point was a long time coming – their last studio album, Everybody Loves a Happy Ending, came out in 2004. It took this much time, Orzabal explains, because of “a series of unfortunate events.” After that last album, at their then-management’s behest, he and bandmate Curt Smith (bass/vocals) began working on new material with a series of top songwriters. This slowed the process considerably compared to the Orzabal and Smith’s previous method of writing on their own.

Finally, by 2016, they had enough material to fill an album – but then, Orzabal says, “Our management at the time had this idea of taking two [new] songs and putting them on a greatest hits record, which they did.” (That was Rule the World, The Greatest Hits, released in 2017.) “But then, through some mismanagement, they didn’t put the album album out – and that was the best thing that could have happened to us, because we were left with this depleted album. My life went pear-shaped at the time, and Curt wasn’t liking the album at all. So those were the fundamentals behind making The Tipping Point.

“So eventually, when I was in a better place, Curt and I agreed on five songs that we liked, which we then re-worked,” Orzabal continues. “At that same time, surprisingly, new songs started to emerge. So it was almost like we were opening ourselves up by killing some of it. We were opening ourselves up to some new forms which were waiting to be born. And all of the sudden, it was a completely and utterly different body of work. That was really the key that changed everything.”

It was a revelation and a return to something familiar, Orzabal admits: “That was Curt and I coming together, just the two of us, without all those songwriting teams. We had no management anymore, we had no record company. It was just like it was when we were kids. And I kind of knew that that was the way forward. I knew that putting our minds together, with all our experience and our chemistry, that something would emerge… and it did, very quickly.”

Orzabal and Smith first became friends and started playing together in bands when they were teenagers in Bath, England. By then, Orzabal was already a leader in the scene. “When I was a kid, from a very early age, I always got other kids involved in music. We would get together, like five of us, and we would bang on pots and pans and sing songs we knew at the top of our voices and really annoy our parents. I used to teach guitar at school, because I was more advanced, so it’s something I’ve always done.”

Still, it took a rather dramatic incident to convince Orzabal that he was meant to pursue music professionally: “I had one of those crossroads that happened to me when I was eighteen,” he says. Smart at school, he had felt optimistic about getting accepted into one of the most elite universities in the U.K., “but I fucked up the interview and I was left without an offer – and then I really flunked school after that. Then I made a choice whether I was going to go out on a limb and take a risk and go into rock and roll, and that’s what I did.”

It became clear that Orzabal had made the right decision because Tears for Fears – the duo he and Smith formed in 1981 after their previous band dissolved – landed a recording contract almost immediately. “Then I got my first publishing check, which was thousands of pounds. So it was like, ‘Wow, this is definitely what I’m doing,’” Orzabal tells The Aquarian.

Tears for Fears went on to create some of the most successful pop albums of the 1980s. Their debut album, The Hurting, reached the top of the UK Albums Chart only two weeks after its release. Though the synth-and-guitar-based songs were melodic and catchy, they were also lyrically dark, focusing on childhood trauma.

Even Orzabal admits that it was surprising when a single off The Hurting, “Mad World,” did so well. “That was a very strange song for us to have our first hit with,” he says, “and over the years people have covered it, and the true meaning of that song has been exposed by people like Gary Jules – his version, you can hear the lyrics quite plainly. So I think they’re beautifully constructed songs, but occasionally, and again, the emotions of the songs resonate with people.”

Music’s emotional power is what drove Orzabal to begin creating it in the first place – and keeps him doing it to this day. “I, from a very early age, learnt to self-soothe with music because no one was listening to me. No one particularly cared if I was having a bad day,” he says. “So I’d just take my guitar in the bedroom and strum. I think that’s a habit that you get into – if you find you’re good at it, you do it for the rest of your life.”

Tears for Fears went on to become one of the most prominent bands in the 1980s, releasing three platinum-selling studio albums in that decade. They’ve continued their success with The Tipping Point, which debuted in the top ten in the UK and U.S. charts, as well as charting in more than a dozen other countries.

Orzabal adds that the deep musical connection his band makes with listeners is especially evident as they’ve been playing live shows to support The Tipping Point. (See below for details on their upcoming shows in the region.) “It feels like we’re on a different level now – it feels like we have a different relationship with the audience. I kind of see them more as friends now. Some people have been coming to our shows for so long. There’s a beautiful wide range of ages, as well. It’s lovely. It’s great, the warmth that we get from the audience.”

While Tears for Fears are playing some of the new songs from The Tipping Point at these shows, Orzabal says they’re sure to play many of their familiar hits, as well. He says it’s gratifying to see the audiences embracing the material from all stages of the band’s career.

“I think this is another thing about getting older: you understand that humans have a lot in common with each other. I think that the experiences you have, if you can share the highs and the lows, then it makes the world a better place. I’ve been reading a lot lately and I’ve been thinking a lot of things about that age-old question, ‘What is the meaning of life?’ And for me, it’s to help other people. It’s that simple.”

FOR TICKETS TO SEE TEARS FOR FEARS, CLICK HERE! YOU CAN CATCH THEM IN PHILLY AT MANN CENTER FOR THE PERFORMING ARTS ON JUNE 21, IN HOLMDEL, NJ ON JUNE 24 AT PNC BANK ARTS CENTER, AND JONES BEACH THEATER IN NY ON JUNE 25!