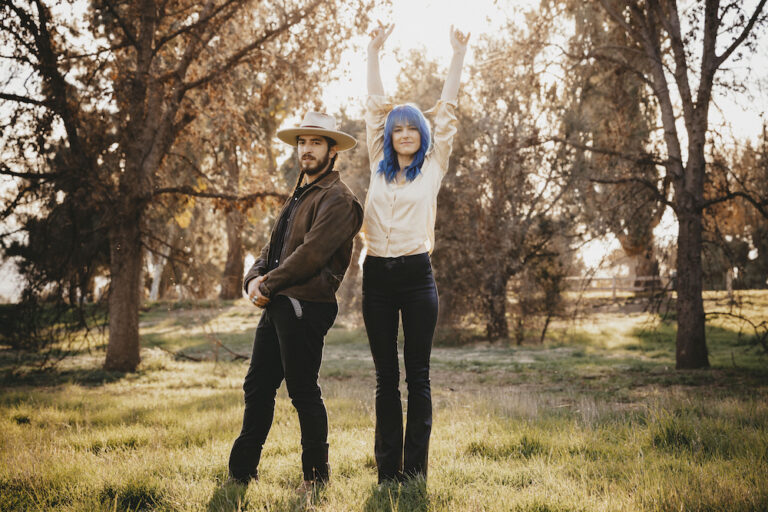 Calling Cadence is Ready to Change the Music Scene

A debut record out, some friends in high places, and an expansive love of music, Calling Cadence is on the right track (with the right tracks under their collective belt).

Calling Cadence is one of those bands you’d peg to come from one of the Southern States. With a bit of southern style, grit, and charm but don’t get it confused Oscar Bugarin and Rae Cole come from the West Coast—Los Angeles to be exact.

The duo, along with a few others on their team from the Beck, Jon Batiste, Norah Jones, and Father John Misty camps, are proving their Cadence’s sound is one of a kind in this ever changing pop and hip-hop landscape. They fuse together music of the 60s and 70s with some folk, jazz, country, and rock influences. They are taking on the task to meld those genres together in 2022. The buzz is building with their self-titled debut out on Hi-Res Records.

Bugarin was in the army but met Cole in Los Angeles at the legendary Viper Room. “We have been in music our whole lives. I performed my whole life, worked on the business side of things in music, but it wasn’t that until I graduated college is when I decided that it was more fulfilling to be a performer,” says Cole.

“I had my first guitar was when I was seven years old. I had a dream that I wanted to pursue music. I couldn’t stop myself from playing after playing my first singing competition. I got discouraged with the Los Angeles music scene because things were changing over to electronic and pop,” says Bugarin. “Many of my friends left for Nashville.”

“I think a lot of people are hungry for it. I heard feedback that our sound is refreshing to people,” Bugarin tells us. “I’m starting to see a trend of rootsy music making a comeback with analog recording and gospel-tinged music. It’s encouraging to see that now. We wouldn’t see that a couple of years ago especially here in Los Angeles.”

“I think the music industry flips occasionally,” Rae adds. “I think we are spearheading that effort of the old retro way of doing things. Even though Los Angeles focuses on EDM there’s people out there that people enjoy our type of music.”

“I try to stay up to date to music, as well. I listen to a lot of old school rap. I was listening to 50 Cent and the Game. There’s still a lot of that that sticks with me. I think Kendrick Lamar’s new material is really inspiring, too,” Bugarin follows up.

Rae agrees. “I listen to The Steel Drivers; bluegrass and country music. I’ve come and go to country all my life. Even EDM producers use those different elements.”

“Everything from fifties rock and roll to Motown to Queen to Stevie Wonder to Steely Dan. It’s American music but putting it to a new form. We didn’t really stick to one genre. It’s the stuff that makes you feel good. It’s a little bit of nostalgia,” says Bugarin.

“I like to think we revolve around the southern blues rock thing especially with our blues influence. Our music is soulful with a twist of funk, pop, and rock,” remarks Rae.

Who They Worked With:

Bugarin explains, “We worked with Josh Adams on drums (Jon Batiste, Norah Jones, Devendra Banhart, Beck), Mitchell Yoshida on keyboards (Edward Sharpe & the Magnetic Zeros), and Elijah Thomson on bass (Father John Misty, Nathaniel Rateliff). Our producer worked with Edward Sharpe who Mitchell Yoshida played with, as well. It was a little intimidating at first. They made it work for us.”

“It varies. It depends on what mood we are in. We bring different ideas to the table,” says Rae. “Or we just start jamming and the ideas just start coming out. Some of the songs we have been writing forever but we started recording in 2019.”

“The ideas just flow and sometimes it’s a process and it takes weeks. Then we present it to the band,” adds Bugarin.

“We love performing live. We love being on stage. That’s the beauty of getting into the music industry especially after the pandemic,” Bugarin states.

The Song That Means the Most:

““Throw My Body” because when I first joined the band that’s the song I wanted to play,” Rae explains before adding, “That is our first single, as well!”

CALLING CADENCE’S SELF-TITLED DEBUT ALBUM IS OUT WHEREVER YOU LISTEN TO MUSIC! KEEP UP WITH THEM BY CHECKING OUT THEIR WEBSITE!