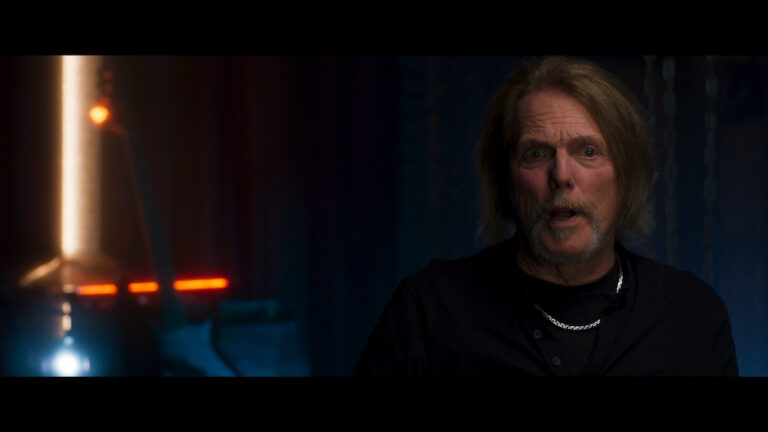 They might not be back in town, so to speak, but they are back… this time on newly restored DVDs.

The best rock documentaries appeal to everyone from an artist or band’s fanatics to people that have never heard of the group. Such is the case with Songs for While I’m Away, the poignant, compelling and pull no punches story of Phil Lynott, the charismatic Thin Lizzy leader and all-around rock star. The superior film by Emer Reynolds is part of The Boys Are Back in Town, the new documentary/concert package that also includes Thin Lizzy’s storied 1978 performance at the Sydney Opera House.

Lynott seemingly was born to be a rockstar. Raised as an African-American in overwhelmingly white Ireland, the film explores his unique upbringing and the love, passion ,and strong ties that bound him to his homeland, even while he made his musical name in London. The film tracks Lynott’s first bands in Ireland to Thin Lizzy’s final lineup, as well as the musician’s dramatic rise and drastic fall.

Thin Lizzy guitar mainstay Scott Gorham, Lynott’s right-hand man, is interviewed extensively throughout the documentary, providing a multitude of great stories, first-hand fun and sobering reflections of Lynott and his legacy. Though best-known for its mega-hit single, “The Boys Are Back in Town,” a tune that relates to listeners more than 45 years later, the film features plenty of other fantastic Thin Lizzy songs.

Lynott’s former wife, Caroline, and his two daughters also reflect upon the man, giving further depth to his story. Songs for While I’m Away is an excellent work that pays homage to Lynott’s legacy and will resonate long after the film’s final scene.

The concert portion of this new release captures an energized, 1978 performance outside the Sydney Opera House. It was a transitional time in the band. Guitarist Gary Moore had just joined, replacing Brian Robertson, while drummer Mark Nauseef sat in for Brian Downey. Still, the band fired on all cylinders as they rocked through a set including scorching run-throughs of  “Bad Reputation,” “Waiting for an Alibi,” and “Cowboy Song,” and high-class renditions of classics like “The Boys Are Back In Town,” “Jailbreak” and “Still In Love With You.” With plenty of video documentation of other line-ups it’s great to have this version of Thin Lizzy preserved for perpetuity.

We recently had the pleasure of talking with Scott Gorham.

When you were approached to appear in the documentary were you hesitant or did you jump right in?

I was straight up in no problem. You’ve got to remember that Phil Lynott was one of my all-time best friends. There was not going to be any way that I was not going to be interviewed. I thought the inclusion of his ex-wife, Caroline, and his daughters, Sarah and Cathleen, was important. I think it’s the first time they’ve done any interviews at all about their father. I think part of the reason is they were extremely young when Phil passed away. They were asking me a ton of question about their dad and I was telling them this story and that story. They wanted the whole nuts and bolts, too, all of who Phil was. We had a great time.

Songs for While I’m Away is a captivating film for both Thin Lizzy fans and people that have never heard of the band before. Why do you think it appeals to such a wide audience?

Well, Phil was a really interesting character, the way he grew up practically the only Black person in Ireland at that time. On the first tour I was noticing how white Ireland actually was. It made him really grow up in a different way. He was very tolerant. but if you pushed him you better be able to throw down. He was an interesting guy, even when he wasn’t singing or playing the bass. The film has footage I’d never seen before, of him as a really young guy and photos with his mother.

Phil was such a commanding presence onstage. What was it like playing with him for the first time?

He even developed my personality on the stage. The first show we ever did was in the Wolverhampton Lafayette Club. We had rehearsed for three weeks and you kind of stand around, you’re not playing a show. On the first song, Brian Downey counted us in and all of the sudden all three of the guys exploded on the stage, running around. I’m backing up and I’m thinking, “Oh boy, nobody told me about this, what’s going on?” I kind of cowered back to my amps. Phil kept looking over his shoulder waving, “Get up here!” Finally, he dragged me to the front of the stage and said, “Right, don’t move from there for the rest of the show.” He wanted everybody in the spotlight. He just didn’t want him. That right there showed me what a cool guy he was. He wanted everybody to be a star

Phil’s father was completely absent in his life. How do you think this affected Phil?

I remember the day Phil first met him, it was maybe 1978 or 1979. We were at the Top of the Pops here in London, doing a recording for a TV show. This guy showed up almost out of the blue and it was his father. He was wearing a white three-piece suit, white shirt, white tie, white patented leather shoes, and a white fedora. Phil said to me, “I don’t want you to leave me alone with this guy.” I said, “Hey, why don’t I get some coffee?” I thought I’d jump back because I wanted to give Phil a couple minutes alone with him. As I was getting the coffee and getting ready to go back in the room this guy was, wham, he was out of there. Maybe 15 minutes in and out. I think Phil thought, “You didn’t give me any of your life, I’m not going to give you any of mine.”

You co-wrote so many songs with Phil. How was that process?

It was pretty easy, really. A lot of times I would be coming up with a riff or a chord pattern. He’d say, “Let’s just embellish on that because I have a part to go with that.” The first song I ever wrote with him was on the first album I played on, Nightlife. I was just playing this chord pattern for a couple of months. He said, “Can you give me more of that. Would you mind if I wrote some lyrics to that?’” I was like “Hell yeah,” and song turned out to be a song called “She Knows,” and that turned out to be the opening track. I thought that was a really cool thing to happen.

Thin Lizzy is best known around the globe for “The Boys Are Back in Town.” Yet that doesn’t even begin to cover your catalog. Do you ever think that’s all some people know of Thin Lizzy and wish they had dug deeper into your discography?

I think any band that has any kind of international hit will take it. At the end of the day it is the harmony guitar and his vocal phrasing and the lyrics, and it’s absolutely pretty representative of the Thin Lizzy catalog. I’m ok with it. How many bands do we know that come and go and maybe have a hit and people forget about it off the bat, and then you’re lucky enough to have songs that people will remember for years to come? That’s very cool.

It seemed like America always was a curse. We would go and tour everyplace else in the world and we’d never ever had a problem. It seemed like every time we stepped on that ramp to fly to America it seemed like things would go wrong. It was almost like someone up there saying, “Guys, this is what we’re going to do. We’ll give you the rest of the world but you can’t have America. Are you ok with that?” The answer to that kind of has to be yes and no at the same time. I know Phil loved America – and it’s my home country, so I, of course, wanted to be big in my hometown. Phil also wrote a lot of songs about America. To not be able to do it was more bad luck than anything else. It was kind of a stinger.

The concert portion of the DVD captures the band at the Sydney Opera House in 1978. With guitarist Gary Moore just having rejoined the band and Mark Nauseef sitting in behind the drum stool for Brian Downey, was it a difficult period?

It was a really testing period. A period that I really loved even though in the pit of your stomach you’re thinking, “is this going to work? Are people expecting something else?” But the more we went on the better this band as a unit became until it was just really tight.

What do you remember about the show?

The Sydney Opera House was a day of just absolute chaos. The rest of the Australian tour went like clockwork, nothing went wrong. That didn’t quite happen in Sydney. The Sydney fathers, if you will, didn’t want us to be anywhere near the Sydney Opera House. They put a cap on 6,000 tickets and we all kind of understood that. The Opera House is like their Taj Mahal or their Eiffel Tower. You look at it from anywhere in the world and you know it. The problem was that a DJ in Sydney had got on the air and said, “You know, ladies and gentleman, Friday night we all know what that is: Thin Lizzy will be playing live at the Sydney Opera House and there are still tickets available.” It was completely sold out like weeks before that! We get down there and they’ve got enough security for 6,000 people. It wasn’t thousands that showed up, it was tens of thousands of people that showed up and these security people are just completely overwhelmed. They let everyone in, so, ok, great, that was going to be fun.  There have been estimates of 60,000 people. The next problem is our PA is big enough for 6,000 but not big enough for 60,000 people. We just walked out with the attitude of, “This is going to be fun, we’re going to have a great time.”

What does the future hold for Scott Gorham?

My partner in (post-Thin Lizzy band) 21 Guns wants to do another album, which I’m really up for. I really love that band and I think we’re going to come up with some really good things. I know there’s people that want me to get out and do the whole Thin Lizzy thing again. We’ll see what happens on that front. I do love playing that music. Right now in my near future I’m going to try to focus on 21 Guns and we’ll see that happens after that.

YOU CAN GET MORE INFORMATION ON SONGS FOR WHILE I’M AWAY BY CHECKING OUT THE THIN LIZZY WEBSITE. PRE-ORDER THE DOCUMENTARY HERE!