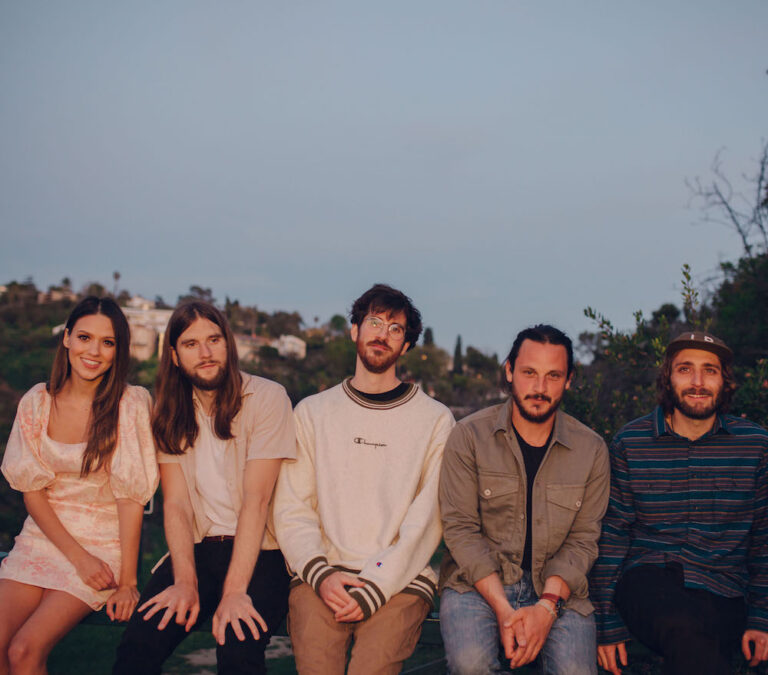 A track-by-track look at an album that is drawing attention, streams, fans, and love from all corners of the world.

Mt. Joy’s following is almost cult-like but in a positive and inspirational sense of the phrase. For example, they recently held an album release party to celebrate their new album, Orange Blood, and the band had the dedicated crowd of fans up on their toes the whole night. At Bowery Ballroom, everyone was singing along to every word of the album – which is out now, but was not yet officially out in the moment. That’s powerful.

The band’s slinky seventies grooves prove that their art has staying power in today’s polarizing music scene. While few expected Mt. Joy to have longevity after their debut performance at South By Southwest some six years ago, the band proved critics wrong by releasing their self-titled debut that captivated and reinvigorated the music lovers in 2018. Here we are half a decade later, though, and Matt Quinn, Sam Cooper, Sotiris Eliopoulos, Jackie Miclau, and Michael Byrnes already have classics in their repertoire such as “Astrovan,” “Rearrange Us,” and “Silver Lining.”

On this new disc the band comes together despite the world’s highs and lows. “Self-discovery, mortality, gun violence, and trying to find joy in what feel like end times,” vocalist Matt Quinn tells us. “It’s a collection of my experiences over an incredibly challenging couple of years for myself and I think everyone. For the band, it just feels like a great showcase of our growth and where we are headed musically. I think there are great moments from every band member on this record and it really shows the crazy talent we have in this band.”

We sat down with Quinn to get an intimate overview of the new record, Orange Blood, and Mt. Joy in 2022 as a whole.

“This song is about a trip I took in Joshua tree with my girlfriend. Just sitting in the desert watching the sun decorate everything and reflecting on what you really need to be happy.”

“I’ve said this before but this is the shot of tequila on the record. If ‘Orange Blood’ is asking existential questions, ‘Evergreen’ is answering them by saying: ‘You have everything you need to get what you want. So, go for it.'”

“My girlfriend is Brazilian and over the pandemic I spent so much time listening to amazing Brazilian music and I really wanted to incorporate some Brazilian rhythm concepts in this record. This song started with the challenge of kind of juxtaposing a Brazilian rhythm with a typical Mt. Joy song approach. The song is about how love grows and changes when a person has passed or is no longer in your life. We question what could have been and it seems we spend our whole lives learning to live with our memories instead.”

“This song is about an inside joke within the band. A Johnson can be a thing. ‘Pass that Johnson over here.’ Or a situation is often a Johnson, like a canceled tour is a Johnson. However, I forgot it was also a dick euphemism, so I accidentally made a dick joke chorus. Oops!”

“Just a song about trying to be present in a crazy world.”

“This is a song about realizing how we are all connected and need each other more than we know.”

“This is a song written during the pandemic about the decay of society and gun violence in Philadelphia. It sadly feels perpetually fresh now as our country continues to allow guns to ruin lives.”

“This song was written in a garden full of fake plants in LA while we were recording. It’s about one-sided love and how we can create hope for ourselves when we really want something more than someone else.”

“I wrote this song in 2016 in LA. It was one of the first songs I ever wrote for the Mt. Joy project. We could never quite get it right though and then finally, credit to Caleb Nelson and the band, we found the right arrangement to get this recorded right.”

“Our producer’s father tragically passed during the recording of this album. We paused recording while he left the studio to be with his family. During that time, I wrote ‘Bathroom Light.’ It’s a love song through the lens of our mortality. Just go for things that move you and don’t judge people who have done the same.”

ORANGE BLOOD IS AVAILABLE ON ALL DSPS AND FOR PURCHASE RIGHT NOW! SEE WHERE YOU CAN LISTEN BY CLICKING THIS LINK!