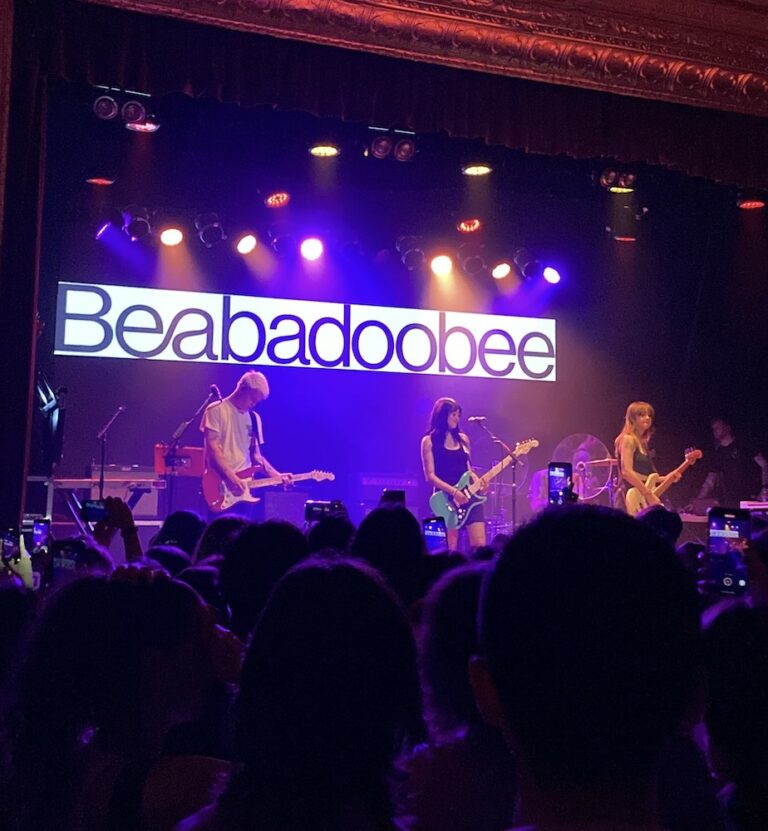 Warsaw Riled up by Beabadoobee… & Fans

There really is, undoubtedly, a discerning fandom around the Filipino-born, London-raised 22-year-old Beabadoobee. Make an appearance at one of her shows, even a support show like this one for Governors Ball NYC, and you’ll see the massive excitement from adoring fans. Likely it’s the way in which Beabadoobee articulates the array of genres she performs. From blending nineties alt rock nostalgia and occasional midwest emo riffs with bedroom pop acoustic takes and gleaming choruses, there’s seemingly little that the versatile artist can’t do. There’s something here for everyone, and make no mistake, despite this flurry of genres, it all sounds unmistakably Beabadoobee.

She’s relatable, of course, too. Not too recently Bea (real name Beatrice Laus) was just a teenager living the same experiences as most others did while learning guitar through tutorials on YouTube. It was actually Beabadoobee’s first song that she wrote on guitar, “Coffee,” that started making headway online in 2017 where she was discovered by her current label, Dirty Hit (The 1975, Rina Sawayama, Wolf Alice). Since then, it’s been nothing but an explosive rise accompanied by critically acclaimed EPs such as Space Cadet and Loveworm, as well as her impressive debut full length, Fake It Flowers.

As glitchy crackles mark the start, Bea – along with her three-piece band – enter the room, walking on stage on June 9. They opened up the Brooklyn show with “Worth It,” a confessional track about teenage affair, where in the choruses Beabadoobee flows in and out of falsetto singing, “Don’t think we can be friends / ‘cause you’re too pretty.” Immediately it’s apparent that she has a knack for writing infectious choruses, in this instance specifically and melodically. Soon after she sings “Care,” another example of this talent, where she builds on the lyrics, “But you don’t really / care, care, care, yeah.” With sudden and explosive drum crashes and guitar hits being exchanging between the lyrics, it’s difficult not to shout along empathetically.

“Yoshimi, Forest, Magdalene” is another great showcase of the explosiveness that can exude from the group as a whole, for Bea screams out what would be her future kids names. The whole band cascades onto each other with the drummer (Luca) being a joy to watch, showing no restraint behind two, small, circular drum shields. But, Beabadoobee shines just as bright when performing songs like “Tired,” an ethereal pop track from her second EP, Patched Up. Between songs like this, Bea switches out electric and acoustic guitars with the help of her attentive guitar tech.

Eliana, the band’s fantastic bassist, receives a well-deserved, fitting spotlight during “She Plays Bass.” “See You Soon” and “Talk” eventually follow up, two songs off of Beabadoobee’s upcoming July release – her second LP, Beatopia. The album’s title is inspired by the fantasy world maps she would draw as a child, one of which was found by a music teacher which mockingly gave the name “Beatopia.” (Take a visit to her website and you’ll find your cursor being followed by a friendly butterfly drawing, along with other child-like imaginative drawings.)

Excitingly, the band performed an altered version of “Back to Mars.” Originally a more reserved, airy, acoustic take, the performance was overhauled to be something that now inspired jumping and moshing as Bea sang into the crowd along rabid drum fills. “Charlie Brown” is another number that grew mini mosh pits within the crowd, most evidently when Beabadoobee screams “throw it away” amid an electric instrumental build up.

Closing her set was a then-unreleased track entitled “10:36” in which was presented by Bea stating, that “this [was] a fucking treat for you.” The crowd went wild as Beabadoobee directed them to form a friendly wall of death, running into each other as the dance-y chorus ensued. This was then followed by a buzzing “Cologne” where Jacob, the guitarist, lent his guitar into the crowd. A wrong note couldn’t be played in that instance and it was a gnarly, noisy end to an incredible set.