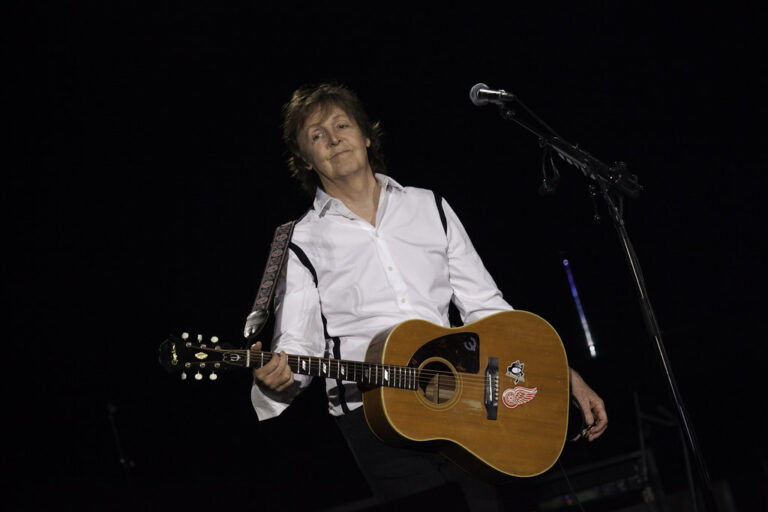 Paul McCartney - Out There Concert | 140420-5788-jikatu" by jikatu is licensed under CC BY-SA 2.0. To view a copy of this license, visit https://creativecommons.org/licenses/by-sa/2.0/?ref=openverse

I feel obligated to acknowledge the 80th birthday of James Paul McCartney the day after I am writing this – June 18, 2022. Beyond the fact that I have noted certain milestones for many of popular music’s giants here over the years and for a while became the de facto eulogist for too many more, there has been a weird connection I’ve had with Sir Paul for the past three years. Not the least of which having conceived a book project around his greatest song (in my humble opinion) “Hey Jude” titled Take a Sad Song – The Emotional Currency of “Hey Jude,” which was released just a few weeks ago, mere days before this momentous occasion and the actual date the man wrote the song, most likely June 29, 1968.

One of the things I learned hanging in the shadow of Paul McCartney these past years, is the importance of staying alive. For the longest time, especially after the death of his songwriting partner, the iconic and sainted John Lennon in 1980, McCartney’s significance in this little four-piece rock and roll combo he founded, the Beatles (have you heard of this?) was greatly and woefully diminished. Living was a bad career move for Macca… at first. Now it turns out having several lives after you’ve peaked at 26-years-old is a good thing. And an argument can be made that now that Paul has managed to make eighty and has completed his tour triumphantly in front of eighty-thousand or so fans in a massive stadium here in N.J. last evening, it was a tremendous career move. Not to mention a good personal one, because, you know, otherwise…

Makes sense that Paul McCartney is still with us. I mean, what 16-year-old boy – music-obsessed, sex fiend, ego loon – takes the time to write “When I’m Sixty-Four?” Then, instead of forgetting he ever did such a thing put it on an album (Sgt. Pepper’s Lonely Hearts Club Band, have you heard of this?) that came out eight years later when he was just 24. The man had a plan and it has gone way past sixty-four. If my math is correct, 16 years past. The age he was when…

Ok, so Paul has lived and has made a lot of music. As I write in my book, people seem to like this music. Some stats for these songs that Paul’s come up with – composed with and without some notable collaborators like the aforementioned Lennon (wowza) and Michael Jackson, Stevie Wonder, Elvis Costello, Johnny Cash, and Kanye West to name a few – include 32 that have gone to #1 in the United States and/or in the United Kingdom. A staggering 129 of his songs have charted in the United Kingdom, 91 reaching the Top 10. He is the Guinness Book of World Records’ Most Successful Songwriter of All Time. “No one else.” I wrote, “is remotely in this stratosphere.”

Paul McCartney might be the most prolific and influential songwriter of popular music ever. He is Gershwin and Porter and Ellington and Berlin and all those other guys and then some. Paul, as I discovered also in my research, is song. He has been song, and he will forever be song. I think it is possible if you look up the word “song” in Webster’s it might have Paul’s smiling face next to it. There is no daylight between a hummable tune and James Paul McCartney.

Oh, I also found out during this book journey that apparently the Campion men over a century-plus were fellow Liverpudlians who married a lot of Irish women from across the water. This is thanks to my Little Brother, PJ, who is now the family archaist. Before this, I was merely another of these Irish/Italian types from the Bronx by way of a large boat of people. Turns out there was a large boat or two or three, there was just a Liverpudlian Campion on it.

I was already here in 1964 when the Beatles arrived via an airplane and changed the planet forever. There are pop stars and icons and then there is the inexplicable sonic boom of the Beatles, who were four scrums from that British port town that no one gave a flying fart about until they invaded every cover of everything. People coming from nowhere to dominate is the stuff of legend – and for some weird reason Paul, this old soul with his songs about retirement written before he could shave, rode it like he knew it all along. This is the same boyish charm that pervades today. You see his glee when he performs and gets those cheers. He loves those cheers. His little dance when he stands up from the piano after serenading us with “Maybe I’m Amazed” or “Let It Be” or the next masterpiece is pure unadulterated joy. I saw him for the second time in my nearly 60 years on the planet a few weeks ago in Syracuse, New York, where my wife is from and her amazing family (that is my family) and where I signed my books that afternoon with his visage on the cover, and all those the years between 1964 and 1968 and 1978 and 1989 (when I first saw him at MSG) and the rest melt away into one big Macca moment.

A musician friend of mine back in the mid-eighties once mused that it is strange that anyone can do an impression of almost any rock star from the 1950s onward, except McCarney. Paul doesn’t have a distinct sound (unless you listen to Badfinger or early Billy Joel or any boy band that has existed after the Beatles) but I kind of know what he meant. He meant that Paul could be a vocalist for any time and any occasion His songs demand that his voice run the gamut. It isn’t an affect he is doing; it is Paul being song, again and again, and, blessedly, again.

So, all those year ago, and the years in between and the ones to come, are right there for Paul, who is a time machine, an indelible mark on our sense memories in sound. He brings us there, time and again, with a melody for the ages. Because he has aged.

So, fuck dying and leaving a good-looking corpse and all the bullshit about burning out and fading away.

Long may he be song.

James Campion is the Managing Editor of The Reality Check News & Information Desk and the author of “Deep Tank Jersey”, “Fear No Art”, “Trailing Jesus”, “Midnight For Cinderella“, “Y”. “Shout It Out Loud – The Story of KISS’s Destroyer and the Making of an American Icon”, “Accidently Like a Martyr – The Tortured Art of Warren Zevon”, and most recently, “Take a Sad Song… The Emotional Currency of “Hey Jude.”