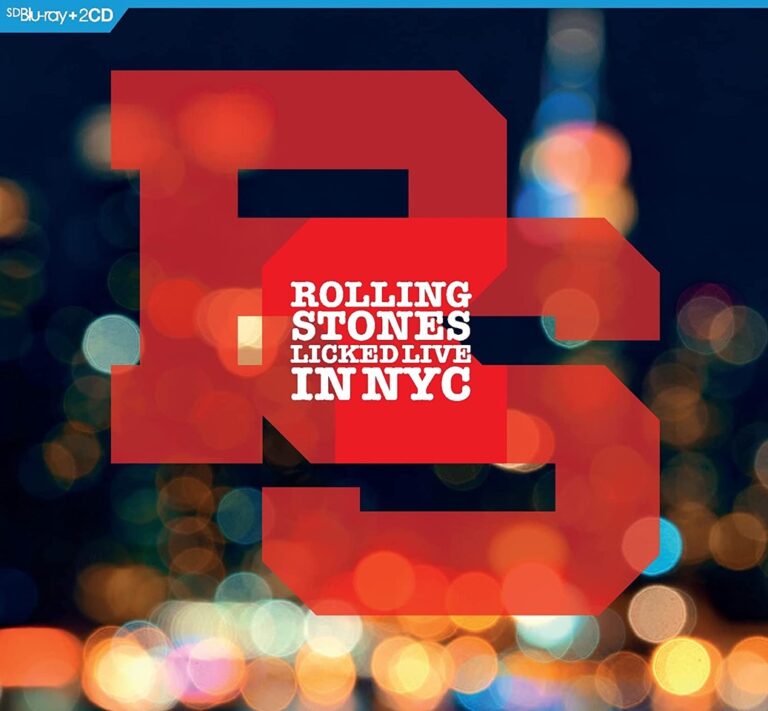 You may or may not consider the Rolling Stones the world’s greatest rock and roll band, but you’d have to agree that when it comes to mining the vaults, only a few other acts are in their league. Just in the past few years, we’ve witnessed the release of such albums and DVDs/Blu-rays as Sticky Fingers Live at the Fonda Theatre, Bridges to Bremen, Bridges to Buenos Aires, Steel Wheels Live, A Bigger Bang Live on Copacabana Beach, and, only a few weeks ago, El Mocambo 1977 – and that’s not counting expanded anniversary editions of several old studio albums, a hits anthology, and a collection of BBC studio recordings. And now we have Licked Live in NYC.

As a result of such releases, some super fans may now own, for example, at least 10 concert versions of both “Brown Sugar” and “Honky Tonk Women,” plus nine live readings of “(I Can’t Get No) Satisfaction,” and 11 of “Jumpin’ Jack Flash.” You can’t always get what you want but sometimes, perhaps, you get a little more than you need.

That said, reasons do exist to pick up Licked Live in NYC, which captures a 2003 performance at Madison Square Garden and is available on three LPs or as a two-CD set that you can buy with or without an accompanying DVD or Blu-ray. First released in 2003 as an HBO special and as part of a package called Four Flicks, the concert has been restored, remastered, and expanded with previously unreleased performances of “Start Me Up,” “Tumbling Dice,” “Gimme Shelter,” and “Sympathy for the Devil.”

Like most of the rest of the program, these are all regularly heard Stones concert staples. There are a few less-often-performed numbers, however, such as “Thru and Thru,” “Don’t Stop,” and Let It Bleed’s “Monkey Man,” plus a reading of “Honky Tonk Women” that features a guest appearance by Sheryl Crow. Other enticements to buy the DVD or Blu-ray include three bonus tracks from an Amsterdam, Holland gig (“Star Star,” “Street Fighting Man,” and Willie Dixon’s “I Just Want to Make Love to You”); some rehearsal footage; and a loosely constructed but often entertaining nearly hour-long documentary about the 2003 tour. Though the Blu-ray is standard definition (not widescreen), its picture quality is excellent as is its DTS-HD Master audio.

The band – capably backed by such frequent Stones accompanists as keyboardist Chuck Leavell and saxophonist Bobby Keys – is in fine form throughout.

Various artists, Americana Railroad. Bob Dylan once devoted two whole episodes of his Theme Time Radio Hour to railroad-related tunes, but the shows barely scratched the surface of this subject, which has fascinated composers for as long as there have been songs and trains. You can hear why in this excellent 19-song anthology, which conjures up the romance of the rails with a mix of obscure and well-known numbers that are delivered in a wide range of styles – everything from acoustic folk and country to hard rock. Carla Olson, whose last anthology project was 2021’s Ladies Sing Lightfoot, produced.

Though the participants include Creedence Clearwater’s John Fogerty (who delivers an acoustic version of Steve Goodman’s “City of New Orleans”), the 74-minute set relies mostly on relatively little-known artists. AJ Haynes of the Louisiana soul-rock band Seratones, for example, serves up a lilting rendition of Elizabeth Cotton’s “Freight Train,” while Olson and session musician Brian Ray deliver a blistering cover of Procol Harum’s “Whiskey Train.” Junior Parker’s “Mystery Train” shows up twice here, in rockabilly readings by Rocky Burnette (son of Johnny) and James Intveld. Other highlights include Jimmie Rodgers’s “Waiting for a Train,” by Paul Burch with Fats Kaplin on dobro; and “Southwest Chief,” a new number by Dave Alvin that references his friend Bill Morrisey, the late folksinger.

The Beach Boys, Sounds of Summer: The Very Best of the Beach Boys. Just in time for summer, the Beach Boys begin their 60th-anniversary celebration by offering a vastly expanded version of their 2003 hits collection, which includes new liner notes and photos. The three-CD set (also available on vinyl) contains 80 tracks, up from 30 on the earlier edition. All the classic hits are here—“California Girls,” “I Get Around,” Don’t Worry, Baby,” “Help Me, Rhonda,” and “Wouldn’t It Be Nice,” to name a few – as are a variety of terrific deep cuts.

The music has never sounded better: all 80 tracks have been remastered and 24 of them (including two that are in stereo for the first time) feature new mixes that brighten the sound and make its elements more distinguishable. Moreover, the whole first disc (which includes most of those new mixes) offers Dolby Atmos surround sound. You’ll need the right playback equipment to appreciate the Atmos but no matter how you listen, you’re bound to have what the group would call “Fun, Fun, Fun.”

Various artists, United Dreadlocks, Volumes 1 and 2. This two-CD set, which adds 24 bonus tracks to two 1970s albums and features extensive liner notes, chronicles some of the best work of influential reggae roots producers Joe Gibbs, Errol Thompson, and Ossie Hibbert. The program includes material that draws on pop, rocksteady, ska, and R&B and showcases many of the most talented Jamaican artists of the era – Gregory Isaacs, Dennis Brown, the Mighty Diamonds, Max Romeo, Junior Byles, the Ethiopians, and many more.

The 44-track anthology boasts lots of material that has not previously appeared on CD and a generous number of big hits, including the No. 1 UK smash “Uptown Top Ranking,” by Jamaican teenagers Althea Forrest and Donna Reid. When it comes to reggae anthologies, this package is nearly as essential as Tougher Than Tough: The Story of Jamaican Music (which duplicates only one of its selections) and the classic soundtrack from The Harder They Come.

Paul Winter Consort, Concert in the Barn. For a quarter-century, jazz saxophonist Paul Winter and his bandmates welcomed the summer solstice with a concert at New York’s Cathedral of St. John the Divine. But that venue was closed for performances during the pandemic and COVID made it impossible for some of Winter’s regular accompanists to travel. That’s when he proved that his ability to improvise wasn’t limited to his musical instrument. Winter decided to perform his 2021 solstice concert in a barn on his Connecticut property and found capable substitutes for the musicians who couldn’t fly in.

The hour-long, mostly instrumental result, which was recorded beginning at 4:30 a.m., is among the 82-year-old Winter’s finest works. Highlights include “Icarus” and “The Silence of a Candle,” both by Ralph Towner, who first worked with Winter in the late 1960s, before leaving to form Oregon; and three numbers by Brazilian composer Henrique Eisenmann, who plays piano on the set. This soothing, uplifting concert deserves loud applause, but you won’t hear any because the audience consisted solely of two horses in a stable below the musicians.