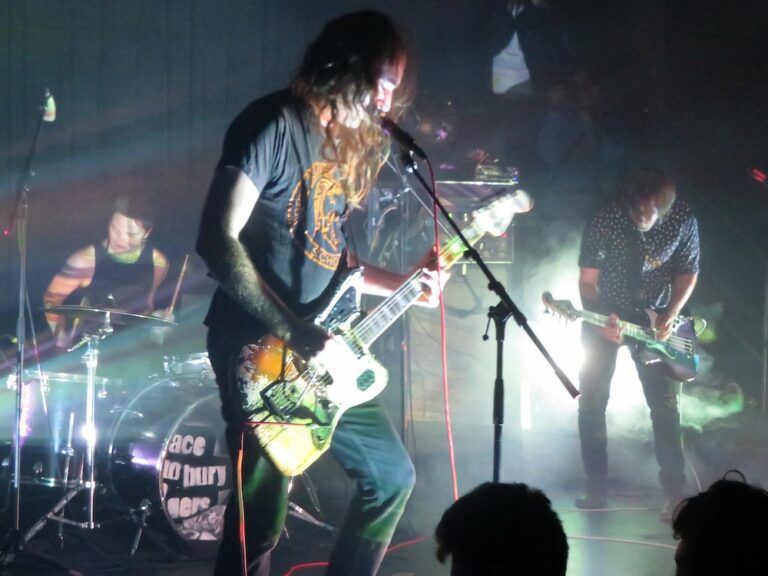 A Place to Bury Strangers brutally batters instruments and eardrums at their concerts. At the Music Hall of Williamsburg, guitarist/vocalist Oliver Ackermann violently destroyed his guitar within the first 10 minutes of the performance, repeatedly throwing it high into the air and deliberately not attempting to catch it before it smashed into pieces against the stage floor; later guitars also suffered his unmerciful abuse. Bassist John Fedowitz and drummer Sandra Fedowitz were equally aggressive in the manner in which they played their instruments. They played fast, hard-pounding rhythms while Ackermann experimented with whatever ear-piercing sounds he could draw from his guitars, amplifiers, and distortion devices. That is only the start of the A Place to Bury Strangers concert experience.

Ackermann relocated to New York from Virginia following the demise of his previous band, Skywave, which included John Fedowitz. Ackerman joined A Place to Bury Strangers early in its 2002 inception and before the band’s first public performance in 2003. As the original members left one by one, he remained the sole remaining member. In subsequent years, an endless parade of musicians came through the ranks, each attempting to fulfill Ackermann’s musical vision for an increasingly chaotic A Place to Bury Strangers. John Fedowitz rejoined his former band mate in 2016 and Sandra Fedowitz joined in 2021; this rhythm section had previously performed together in another noise band, Ceremony East Coast. A Place to Bury Strangers, commonly known by the initials APTBS, released its sixth and most recent album, See Through You, on February 4.

A return to APTBS’ home base of Brooklyn meant that the bulk of the audience would know what to expect. Thick fog relentlessly obscured the stage and filled the room with a machine-like odor. That fog, plus dim stage lighting and white strobe lights, allowed the audience only fleeting glimpses of the three musicians. As the music started, some audience members near the stage banged their heads, but most stood in hypnotic trance state as the rhythm section pounded intensely and Ackermann used guitars, gadgets, and feedback to create a harsh and heavy wall-of-sound aural overload.

Ackermann sang lyrics that were barely decipherable. Inevitably, however, the lyric portion of the songs were the gateways to dynamic guitar leads, which in turn led to raw noise, always to the accompaniment of the strong rhythm section. At one point, Ackermann lifted one of the florescent tube strobe lights and began using it to scrape his guitar strings. He then laid his guitar on the floor and dropped the light casing on the strings… anything for a bit more noise.

For those unable to see the musicians clearly on stage, a second chance came a bit past the midway point of the show. The three musicians descended from the stage and walked through the audience towards the back of the room and performed with fans pressed against them. Alas, with no spotlights, much of the audience still did not see the musicians.

The show ended as the trio disappeared into the fog of their own creation as mysteriously as they had appeared. The guitar feedback continued to hum until the roadies came to turn off the switch on the amplifier. The APTBS concert experience ended and the world returned to normal.