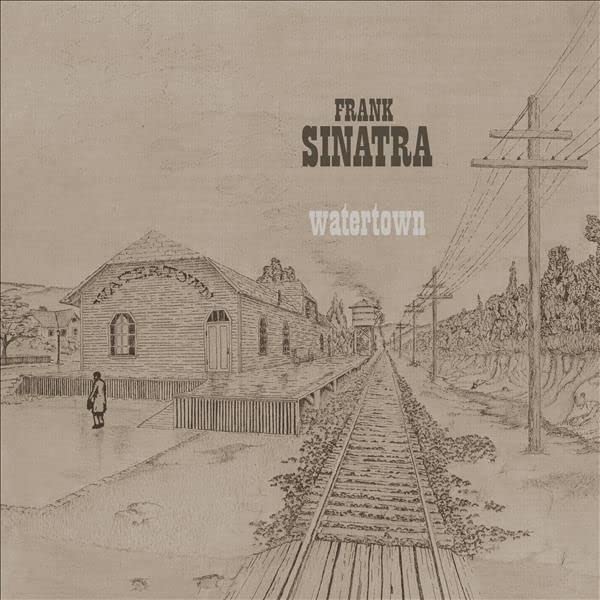 For Watertown, his 1970 concept album on the Reprise label, Frank Sinatra took a gamble. While his earlier solo LPs all found him working with mainstream pop songwriters, he filled Watertown with numbers produced and co-written by Bob Gaudio of the rock group the Four Seasons. Gaudio – whose composing credits include such hits by that outfit as “Big Girls Don’t Cry,” “Walk Like a Man,” “Rag Doll,” and “Sherry” – collaborated on the Sinatra project with lyricist Jake Holmes, author of “Dazed and Confused” which Led Zeppelin adapted for its first LP.

While Watertown’s orchestration employs some pop-rock elements, its music and performances don’t represent as much of a departure from Sinatra’s earlier albums as the involvement of Gaudio and Holmes might suggest. The album, which tells the unhappy story of a man whose wife unexpectedly abandons him and their two children, stands out not so much because it’s different but because it’s so good.

Nevertheless, it was a bit of a flop at the time of its release. Though it racked up respectable sales in the UK, it didn’t even break into the Top 100 on the American Billboard charts, and it achieved mixed reviews from the critics. In 1990, when Reprise issued a four-disc anthology of Sinatra’s work for the label, it included not a single track from Watertown.

But the public doesn’t always recognize a classic on first listen, and neither do the critics. And in recent years, both groups have begun to appreciate Watertown’s excellence. The album boasts moody, evocative orchestration and poignant lyrics, and Sinatra, whose nuanced vocals here rank with his best, makes the most of every syllable.

The record gets a second chance at finding a wider audience with a newly issued remastered edition, which offers a fresh mix from the original tapes. Also featured are four outtakes from the sessions, two radio ads for the LP, and two versions of “Lady Day,” a contemporaneous song about Billie Holiday that first appeared as a bonus track on a 1994 CD edition of the album. A 28-page booklet includes all the lyrics, Gaudio’s notes about each track, and essays about the album from several people, including Gaudio, Holmes, and the Four Seasons’ Frankie Valli, who played a big role in putting the project together.

If you’re a Sinatra fan and don’t have this record, there’s an important gap in your collection.

Frank Zappa, Zappa/Erie. Though Frank Zappa issued lots of albums in his lifetime, his releases are arriving at a faster pace than ever before nearly three decades after his death. In just the past year, we’ve witnessed the appearance of Zappa ’88: The Last U.S. Show (two CDs), a 50th anniversary edition of 200 Motels (six CDs), The Mothers 1971 (eight CDs), and now Zappa/Erie (six CDs), which collects three complete mid-70s concerts from Erie, Pennsylvania, along with assorted live bonus material.

Packaged in a hardcover book and featuring more than seven hours of jazz-inflected rock (only about 10 minutes of which have previously seen official release), the well-recorded set captures Zappa in a particularly strong period. Moreover, it includes rare live versions of some tracks from two of his earliest Mothers of Invention albums: Freak Out!, the group’s 1966 debut, and 1968’s We’re Only in It for the Money. Like all Zappa LPs, this latest collection will not appeal to a wide audience, and even die-hard fans may find themselves skipping over some of the juvenile silliness to get to the good stuff. But that good stuff is here, and it offers lots of reminders of just how adventurous and innovative this one-of-a-kind artist could be.

Peter Rowan, Calling You from My Mountain. Peter Rowan – who is rooted in bluegrass but draws heavily on everything from rock to jazz – has lately been making some of the best records of his distinguished six-decade career. They include 2017’s My Aloha!, 2018’s Carter Stanley’s Eyes, and now Calling You from My Mountain, which features his virtuoso guitar and mandolin work and guest spots from such next-generation artists as Molly Tuttle and Lindsay Lou.

Original songs dominate the set, including an antiwar number called “The Red, the White, and the Blue,” the sprightly “The Song That Made Hank Williams Dance,” and “Dream of Heaven,” which was inspired by Williams’s Luke the Drifter album. There are also several covers, among them Woody Guthrie’s “New York Town”; “Frog on the Lily Pond,” by Bill Monroe, whose Bluegrass Boys once counted Rowan as a member; A.P. Carter’s “Little Joe”; and “Penitentiary Blues (Big Brazos),” by Lightnin’ Hopkins, with whom Rowan once toured.

James Holvay, This Girl. James Holvay amassed credits as a singer, songwriter, guitarist, and producer in the late 1960s and seventies but it took him until last year to issue a record under his own name. That terrific EP, Sweet Soul Song, nodded to vintage Chicago soul, and especially Curtis Mayfield and the Impressions. So does the new This Girl, an equally excellent follow-up EP, which includes three freshly written originals plus remakes of two songs Holvay composed in the 60s for the MOB, a band he co-founded back then.

These lushly orchestrated, frequently horn-spiced odes to love lost and found – which feature backup from musicians whose credits include work with the Temptations, Marvin Gaye, and the O’Jays – are as good as anything that issued from the Windy City during its soul music heyday. Holvay says it took him two years to find a backup crew who could play the music. Now that he has them, it’s time for him to stop teasing us with EPs and start applying his songwriting talents and wonderful falsetto to full-length CDs.

Cowboy Junkies, Songs of the Recollection. Cowboy Junkies first garnered major attention in the U.S. with 1988’s The Trinity Session, which featured several cover versions, most notably Lou Reed’s “Sweet Jane.” In the years since they’ve issued lots of original material, but on their new Songs of the Recollectionthey again spotlight their interpretive powers. The album –which weds four previously released tracks to five new ones – includes such numbers as Neil Young’s “Don’t Let It Bring You Down” and “Love in Mind,” the Rolling Stones’ “No Expectations,” the Cure’s “Seventeen Seconds,” and Gordon Lightfoot’s “The Way I Feel.”

The Canadian quartet’s spare musicianship and lead singer Margo Timmins’s understated vocals—neither of which haven’t changed much over the years – make this an enjoyable outing from start to finish. It’s most memorable, though, when the Junkies put their distinctive stamp on material that in its original version sounded quite different. Two examples: David Bowie’s “Five Years” and Bob Dylan’s “I’ve Made Up My Mind to Give Myself to You,” which both shine in the Junkies’ dreamy renditions.