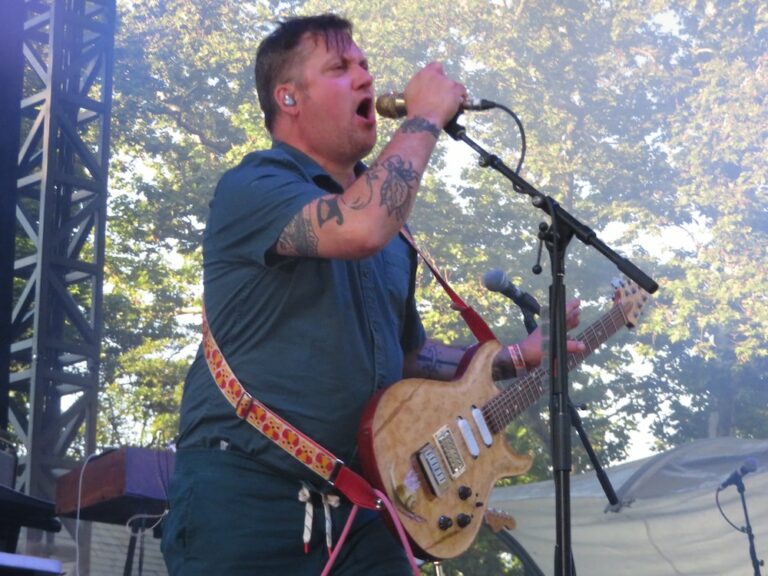 Odd and quirky indie music ruled the late 1990s and early 2000s. Modest Mouse continues to wave that flag proudly, 30 years after its founding in 1992 in Issaquah, Washington.

Modest Mouse first achieved mainstream success in 2004 with its fourth album, Good News for People Who Love Bad News, which sold more than a million copies and generated interest in the band’s earlier catalog. In 2007, the subsequent album, We Were Dead Before the Ship Even Sank, was the first Modest Mouse album to reach No. 1 on the US Billboard 200 chart. The band released its seventh and most recent album, The Golden Casket, on June 25, 2021. Modest Mouse presently consists of two original members, vocalist/guitarist Isaac Brock and drummer Jeremiah Green, plus multi-instrumentalists Tom Peloso and Russell Higbee, percussionist Ben Massarella, and lead guitarist Simon O’Connor.

At SummerStage Central Park, Modest Mouse performed a career-spanning set, featuring songs from all albums. The greatest number from one record, six songs, came from the most recent album, but in a two-hour set consisting of 22 songs, that left plenty of room for other songs. The set began with “Dramamine” from the band’s debut 1996 album, This Is a Long Drive for Someone with Nothing to Think About. The band is known to change its set list frequently and this night the set included a seldom-performed “Teeth Like God’s Shoeshine” from the band’s second album, 1997’s The Lonesome Crowded West. Brock sang and played guitar for most of the set, and also played a banjo during “Bukowski” and “King Rat.”

Even with its long and successful career, Modest Mouse’s music still sounded unconventional and quite left-of-center. Brock’s staccato vocals, irregular melodies, and quizzical lyrics were signatures of a compositional mindset that challenged rather than soothed its audience. The ensemble’s adventurous musical arrangements added layers of complexity. Cobbled together intricately, the result was engaging, yet not at all designed for the typical fan of contemporary music.