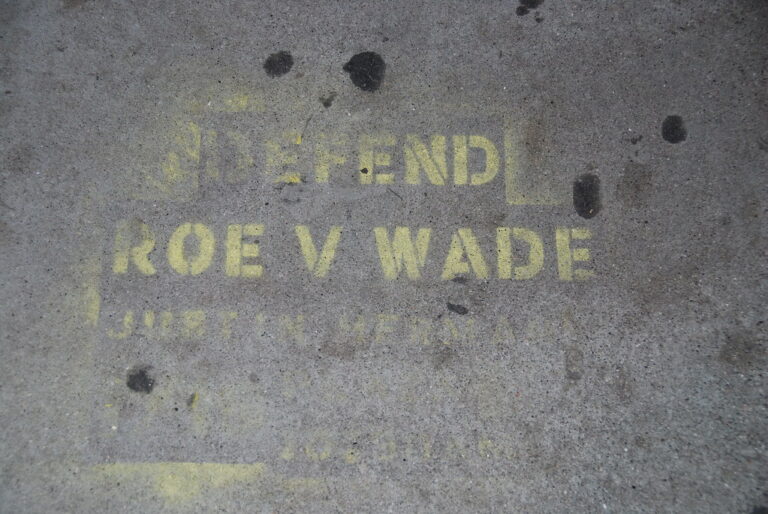 "Defend Roe v Wade 10:30 am Saturday Justin Herman Plaza" by Steve Rhodes is licensed under CC BY-ND 2.0. To view a copy of this license, visit https://creativecommons.org/licenses/by-nd/2.0/?ref=openverse.

Reality Check: WHAT THE ROE?

Man, this is stupid – horrible and un-American – but really, really stupid.

No woman in crisis should ever be a potential criminal in a democratic republic.

If the striking down of Roe v Wade by this politically addled joke of a Supreme Court (because legality had zero to do with a ruling that reads from its briefs as if it were written by hacks that received their law licenses by drawing a bunny on the back of a matchbook) wasn’t so horribly pathetic, then it would be hilarious. Not sure where to even begin – but it won’t be as I have written before about women’s rights or how it blithely tramples on habeas corpus and three amendments to the U.S. Constitution. Nope. I would like to ask three key questions at this juncture. No, wait, four. Four questions about this “ruling” aka “Republican puppetry.”

First one to get out of the way, because it is the easiest: Can you name another Supreme Court ruling that has so summarily and arbitrarily (or any which way) expunged a fundamental human right to sovereignty? You can’t. Move on.

Second one is also fairly easy, although it may be fraught with subjective analysis: What level of psychotic fascism does Justice Clarence Thomas practice: titanic or atomic? Because this crazy fucker wasn’t satisfied with just completely obliterating a right, he wants to attack every case that uses right to privacy in due process and the equal protection legal standards set by Roe – specifically citing cases that legalized contraception, same-sex relationships, and same-sex marriage. That is some weird medieval shit. If Thomas was a Middle Eastern country, we would have bombed him by five o’clock on the Friday this “ruling, aka “Donald Trump’s gift that keeps on giving,” came down.

Now onto to the more confusing queries.

Has anyone bothered to provide a concrete, immutable answer (key in legal arguments and court decisions) on what pregnancy is? How can you tell if a pregnancy is terminated if there is no agreed upon legal and binding definition of pregnancy? Because I still don’t know, and you don’t know, and all the justices that said Roe v Wade was “settled law” so they can get lifetime appointments to do Mitch McConnell’s bidding don’t know. This entire thing is a smoke-screen magic trick. Are we sure a pregnancy is a fertilized egg? And when does it exactly become that… legally? I understand the science, but a quote in the decision of a 1964 obscenity case decided by the Supreme Court, specifically Justice Potter Stewart, “I know it when I see it” might not pass muster for someone who is about to have the federal government of a purported free country decide whether they should bring to term a mass of tissue that might kill them.

You think the courts are clogged now with meaningless shit? Oh, wait.

And this brings us to the final and most important question that will take down the fabric of what is left of this fragile republic: How are municipalities supposed to uphold abortion as a crime? To be blunt: How exactly do you police this? Already, there are southern states (of course, these people are still upset the real nation took away its slaves and burned their silly little cities to the ground) that want to put in laws to restrict travel for women escaping bondage to real states that do not want control over the innards of its citizenry. So, then, travel between states to obtain an abortion is now illegal? Also, are we trying these women as murderers? So, let’s say you eat a bad taco or guzzle a shit-ton of vodka with a side order of crystal meth, because, you know, you’re really not mommy material, and your fetus flushes out of your privates – is this a case to be investigated by law enforcement? We’re using taxpayer money, nearly two-thirds of which are Pro Choice, to prosecute teenagers who’ve been raped by their uncle?

I am reminded of a brilliant scene in Woody Allen’s 1971 classic film Bananas that best explains what the Court aka “underqualified, unelected masters of 51-percent of the populace” has unleashed. A deranged dictator declares it a law that all citizens must change their underwear daily. He finishes this babble by qualifying that all underwear from then on will be worn on the outside, “so we can check.”

Not sure we should be ok with our tax dollars and law enforcement resources not spending every waking moment protecting us from crazy people with guns shooting actual children so they can monitor the pregnancy of millions of women. This is what the government is dealing with now. Doesn’t the government have enough things to fuck up? You want them fucking up our daughters now?

This I why just striking down the basic constitutional rights for citizens to have control over their bodies was a bad move. You must govern these draconian laws and police these bodies for nine long months and decide if a miscarriage is actually a miscarriage or if it’s manslaughter or maybe first-degree murder? And what to do with the abortion pill – not available to women in 1973 when Roe was passed? Does this “ruling” aka “systemic misogyny” give the right to states to go after manufacturers who make the pill? And can users get it through the mail anymore? Should the Post Office now be involved, and the DEA and the FBI and Homeland Security? States (mostly in the south, because we mistakenly left too many of these towns still standing after the Civil War) are asking neighbors to keep an eye out on women seeking abortions through means beyond Planned Parenthood or a clinic. But, again, who polices this in an official manner? The crazy religious lady next door is now in charge of your body? And who is paying for all these new restrictions and making sure they’re adhered to? And if not murder, what will be the penalty for abortion, which is now murder in twenty states with more coming?

Remember how organized crime flourished during prohibition? I see dollar signs in a black market for morning-after pills. Don’t worry, some clever Mexican cartel is already on it.

My favorite thing so-called Pro- Life advocates aka “religious fanatics” argue is that they are supporting women and that “women are not criminals but victims.” That was as big a lie as “settled law.” A woman today in Mississippi (a slave state again we foolishly did not completely obliterate in 1865), takes an abortion pill, which now thanks to this Supreme Court aka “feckless tool of the fascism” is criminal activity: Does she go to prison? If not, then what was the point of taking Roe down?

There is no point – not legal, not moral, not rational, not constitutional. Which is why it was stupid. Horrible and Un-American, but very, very stupid.

Good luck with all that.

We here in New Jersey respect all of our citizens, not just ones with penises or who practice ancient rituals. We’re good here. Women retain their rights in one of the states that won the original war against slavery – and don’t fret, we’re working on expunging the Republican Party entirely from the state; send them down south where they belong. The rest of this godforsaken country can spend its tax money and police force rounding up teenaged moms filled with the neighborhood drug addict’s sperm.

James Campion is the Managing Editor of The Reality Check News & Information Desk and the author of “Deep Tank Jersey”, “Fear No Art”, “Trailing Jesus”, “Midnight For Cinderella“, “Y”. “Shout It Out Loud – The Story of KISS’s Destroyer and the Making of an American Icon”, “Accidently Like a Martyr – The Tortured Art of Warren Zevon”, and most recently, “Take a Sad Song… The Emotional Currency of “Hey Jude”.