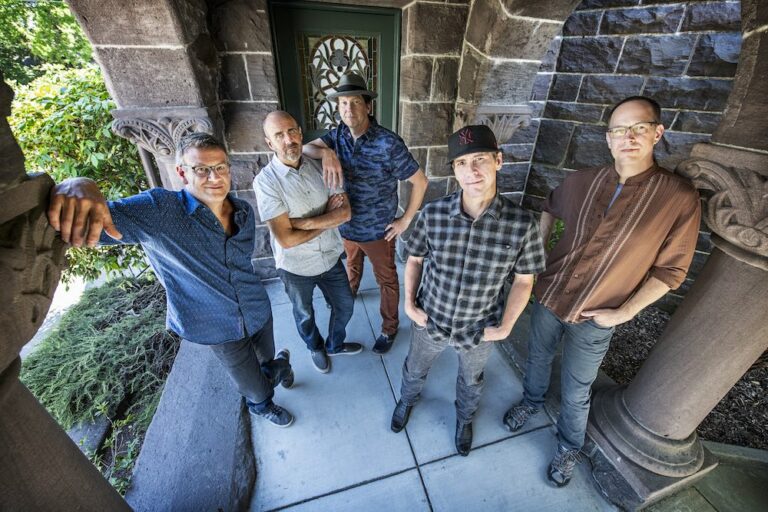 Preeminent jam bands like moe. are best enjoyed in the summer on an outdoor stage. The sun above emitting warm rays and the fresh, green grass caressing your feet below set the positive vibe as concertgoers stand and sway to extended guitar interplay, mesmerizing rhythms, and feel-good songs. Now add the cool breeze of a nearby ocean and you’re in paradise. Witnessing a jam band in the open air is more than seeing a concert; it’s a spiritual musical experience.

The siren call of moe. and the sea come together on Sunday, July 10, at the Seaside Heights Beach Stage. moe. shows celebrate life and this is now especially true. Bassist/vocalist Rob Derhak was declared 100% healthy in 2017 after fighting oropharyngeal cancer and guitarist/vocalist Chuck Garvey is recovering from a stroke that occurred last November. Close friend, guitarist Michael “Suke” Cerulo from Schleigho, is subbing in alongside keyboardist Nate Wilson from Percy Hill and Assembly of Dust.

The veteran band – going 30 years strong – released a new album and EP in 2020. The full-set, This Is Not, We Are, leads off with “LL3,” a track about Derhak’s cancer treatments, while “Crushing” musically and lyrically expresses the excitement and anticipation of falling hard for someone. “Undertone” features a vibrant guitar line and more splendid six-string work is found on “Dangerous Game.” Atop it all is fluent percussion, vibraphone, and marimba work that perfectly accents the music.

The EP, Not Normal, consists of longer songs and near complete instrumentals. Garvey’s “New Hope for the New Year,” written before his stroke, is a driving, inspirational tune. Other standouts include the infectious “Screaming & Kicking” and “Prestige Worldwide.” In addition, this May moe. aired the first episode of their podcast, Podcrash.

The band, formed in Buffalo, New York, is now spread out a bit more geographically. We recently had the pleasure of ringing up Rob Derhak at his Maine home.

How did you approach writing This Is Not, We Are and Not Normal?

We approached the album a lot like we always have. We ended up going up to Tank Studios up in Burlington, Vermont. We lived together, we did an Airbnb and we just spent the whole day working on all the basics together in one room and recording everything live and just adding overdubs. All these songs came out of stuff that we had written in the past few years when we were off the road when I had cancer. It was getting back together doing some rehearsals up in Maine where I live and relearning some old material and bringing new material into the fold. In my mind, we were trying to get back to our roots, to what we sounded like in the early years and get that kind of vibe.

As a first song, is “LL3” a statement of intent? What’s the meaning behind the title?

Basically that was the catalyst for me doing a lot of the writing that I did at that point because the song was about getting treatment. When I was getting treatment, I was down in lower level three in the treatment center for radiation in Boston. It just kind of made sense to put it first because it spurred the creativity and the idea for the new album.

Were you able to write through most of your treatment?

I started pretty strong and I would do some writing. I live in Maine but I was doing all my treatments in Boston. Coming home, I took the train a bunch of times and I would just sit there writing thoughts down, getting thoughts going. During the first half of treatment, I was doing a lot of gathering and writing stuff. Once it really kicked in I was done. There wasn’t much I could do at that point. When I started to feel better I just started putting everything together and finishing up all this material I’d been working on and coming up with new ideas. But there was definitely a point in-between where I wasn’t able to do anything.

On the new album and EP moe. seems fearless, daring, and carefree. How liberating, personally, is moe.’s attitude toward making music?

I’m psyched that you said that; I’m glad that you didn’t say careless! I try to be as honest as I possibly can about stuff. Sonically we’re back to when we first started doing moe. We weren’t really concerned about what we had to live up to. We were just writing what felt good and what made us feel happy. That doesn’t mean that the songs are all happy, but writing them was. That was the approach. I wanted to have that sort of honesty there, the carefree type attitude that we had when we were first starting out and not writing for anybody but for what makes me want to play the songs, to make things enjoyable.

How is the Not Normal EP related to the full album? They seem to have a symbiotic relationship.

We did all of the songs for both together and then basically we had all this material and we just grouped them together accordingly and those songs [on Not Normal] fit better together.

Was it your intention to be a jam band from the start?

No, not really. When we first started, there wasn’t much of a specific jam scene. The Grateful Dead were kind of killing it in their late eighties, early nineties heyday and people were just starting to hear about Phish and bands like that. We were just playing music and listening to stuff like Frank Zappa and bands like Fishbone and clearly the Grateful Dead – all these different types of music that were making us happy. It just sort of evolved from playing in front of an audience. We were thinking about not doing the same thing every night and that’s sort of where the jam band aspect came from.

The moe. experience is so much about the live show. How tough is it to try to replicate the live show in the studio?

Live energy is just that. You can’t replicate it in the studio. It’s not just an auditory thing. You have to feel it, you have to see it, all your senses are getting impacted in a live situation, so trying to replicate that in a recording studio is pretty much impossible. But you really start to focus on doing as much as you can sonically to overcompensate for that. We try as best as we can but it’s still not the same as being there.

The Not Normal EP starts with the song, “New Hope for the New Year.” How are you feeling six months into 2022?

For a band like us, everything is about hope. We keep getting hit with curveballs, new bumps in the road, I guess, and new things to overcome. Chuck wrote that song and then Chuck had a stroke. He’s doing well but we’re hoping for better and hoping that he’s going to be playing with us again. I try to stay as positive as I can. I spent a lot of years seeing the negative side of things and I just feel like there’s always something better on the horizon.

How did the idea to do a podcast, in this case Podcrash, come about?

Because we were not playing as much as we normally, we were just trying to stay together, and it’s something that Chuck can handle and we want to keep him in the loop as much as possible. It’s just a way to keep our fans up to date and honestly, it’s just fun for us. We love shooting the shit and why not do a podcast.

Between your cancer and now Chuck’s stroke, do you have new perspectives on life and the band?

I’m not going to speak for Chuck but I would think that he feels pretty similar. Initially, I didn’t want to tell anybody I was going through this. It was my business… but we had to cancel a tour and I guess I didn’t have a choice. I was very hesitant saying anything but it ended up being a really great thing for me. The outpouring of love from our fans.  I had no clue; I really didn’t know people cared that much and it helped me heal faster than I thought I could.

TO KEEP UP WITH ALL THINGS MOE., CHECK OUT THEIR WEBSITE!