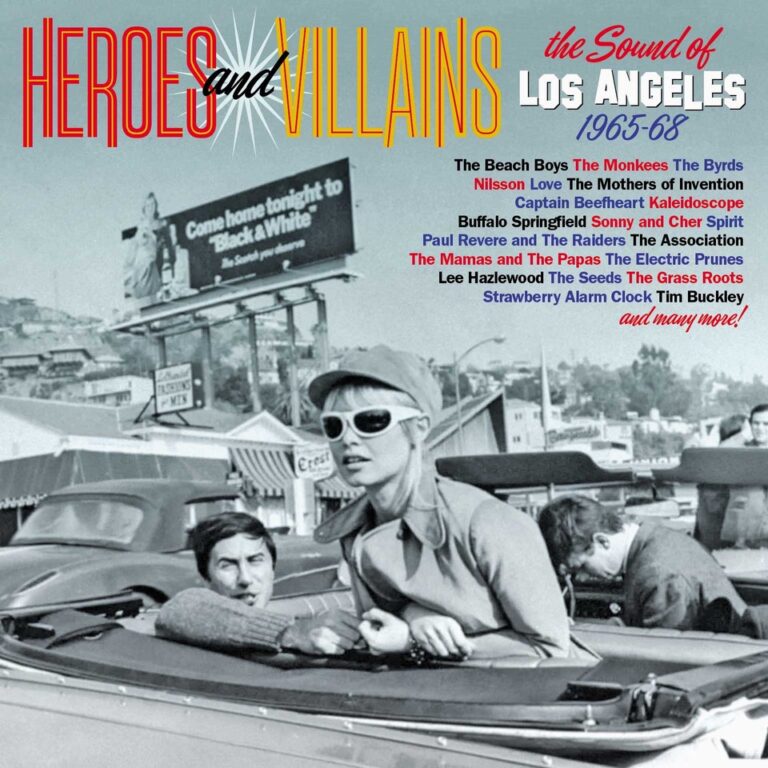 Heroes & Villains: The Sound of Los Angeles 1965–68, a new anthology on Britain’s Grapefruit label, mines the exact same territory as Rhino’s 2009 box, Where the Action Is! Los Angeles Nuggets 1965-1968. The Grapefruit set packs in 90 tracks on three discs – almost as many as the 101 in Rhino’s four-CD collection, and with minimal overlap. (Only five numbers appear on both releases.)

That two record companies have now devoted multi-disc collections to the same four-year period in L.A.’s music scene is not surprising. As both anthologies will remind you, there was nearly as much going on at the time in Southern California as in San Francisco or London.

Don’t look to the Grapefruit package primarily for hits. The program does make room for a few, such as Paul Revere & the Raiders’ “Kicks,” the Monkees’ “Pleasant Valley Sunday,” the Association’s “Along Comes Mary,” the Grass Roots’ “Let’s Live for Today,” and the Mamas & the Papas’ “Twelve Thirty (Young Girls Are Coming to the Canyon).” But Heroes & Villains mostly serves up obscure acts like the Misunderstood, the Second Helping, and the Odds & Ends. Even relatively well-known one-hit wonders like the Peanut Butter Conspiracy, the Music Machine, the Seeds, the Leaves, and Strawberry Alarm Clock are represented not by the songs they’re known for but by rarely heard B-sides, demos, and album tracks.

So are some of the household names. The Byrds, for example, are featured with an alternate version of “Why,” which was the flip side of 1966’s “Eight Miles High,” while Chad & Jeremy – a British duo who were presumably included because they spent a chunk of the late sixties in Southern California – deliver “Pipe Dream,” a 1968 album track, rather than one of their chart singles. Despite this anthology’s title, meanwhile, the Beach Boys surface here not with “Heroes & Villains” or any of their other hits but rather with “Do You Like Worms,” from Brian Wilson’s aborted Smile project. A few major Southern California acts from the period, such as the Doors and the Turtles, are missing entirely, no doubt due to licensing issues.

If you’re a sixties rock fan, though, you probably already have at least some of the era’s best-known material. What most makes this set noteworthy are the many fascinating obscurities that the compilers have unearthed.

Granted, not all of them are treasures. The package includes a smattering of forgettable bubblegum pop, such as Mark Eric’s “Move with the Dawn,” Roger Nichols & the Small Circle of Friends’ “Always You,” and Boystown’s “End of the Line.” There are also a handful of stellar numbers – such as Tim Buckley’s “Carnival Song,” Spirit’s “Uncle Jack,” and Love’s “She Comes in Colors” – from albums that deserve to be heard in their entirety.

But Heroes & Villains, which comes with an info-packed and well-illustrated 78-page booklet, is worth your time and money. It includes seminal work from soon-to-be major artists, such as Gram Parsons (“Luxury Liner,” by his International Submarine Band) and Linda Ronstadt (“New Hard Times,” by her group the Stone Poneys). Also here are Ruthann Friedman’s version of her own “Windy,” which became a huge hit for the Association, and Bobby Jameson’s “Viet Nam,” which musically echoes Bo Diddley’s eponymous R&B hit. Plus, the set features a healthy dose of noteworthy but little-known psychedelia – songs like the Velvet Illusions’ “Acid Head” and “Hippy Town,” Music Machine’s “Point of No Return,” and Clear Light’s “Black Roses.” These products of one of rock’s most creative periods will take you back to another time and place. More importantly, they still sound good today.

The Chantels, The Complete Singles & Albums 1957–1962. Richard Barrett, the lead singer of a popular East Coast vocal group called the Valentines, discovered the Chantels, a female quintet that quickly outshined his outfit. Signed to a record contract in 1957, they had a Top 20 pop single that same year with “Maybe,” which featured their talented lead singer Arlene Smith. Four years later, with Arlene replaced by the equally excellent (and unrelated) Annette Smith, they scored another big hit with “Look in My Eyes.”

If you have a few oldies anthologies from the Chantels’ era, you probably already have both of these classic songs. If you like those numbers, though, you should dig deeper into their catalog, because this early “girl group” – which helped open the door to the Dixie Cups, the Shirelles, the Ronettes, and countless others – recorded a ton of lesser-known strong material. The best of it is on this two-CD, 38-track anthology, which collects both sides of all the singles from their peak period as well as the album tracks that didn’t make it onto 45s.

Hank Ballard, Rocks. Hank Ballard is often a footnote in rock and roll history books, but he deserves a whole chapter. His biggest claim to fame was writing and recording “The Twist,” which, in an arguably inferior cover version, launched a hugely successful career for Chubby Checker a year later. Ballard and his backing group the Midnighters made lots of wonderful, frequently sax-spiced early R&B records, including “Let’s Go, Let’s Go, Let’s Go” as well as numbers like “Work with Me, Annie” and “Annie Had a Baby,” whose risqué lyrics prompted the FCC to ban them from the radio.

This 30-track anthology, which includes songs recorded between 1953 and 1964, boasts extensive liner notes and pristine sound quality that belies the age of the material. It shows Ballard and his cohorts to be among the best purveyors of the sort of R&B that evolved into early rock and roll and will come as a revelation to anyone who isn’t already familiar with the group.

Nat King Cole, From the Capitol Vaults, Vols. 1 and 2. The great Nat King Cole released lots of records in his lifetime, and many more appeared in the years following his death in 1965 at age 45. More than half a century later, though, still more material is emerging. In March, his label digitally released a 14-track collection of previously unheard performances recorded between 1949 and 1952; and a couple of weeks ago, Capitol offered another 14 numbers, this time from 1953 to 1959.

There are occasional stumbles here, such as the attempted rock of “Do I Like It” and the puerile “When Rock and Roll Came to Trinidad,” but the lion’s share of this material is classic Cole. When he applies his rich vocals to a ballad like Irving Berlin’s “Maybe It’s Because I Love You Too Much” or Lester Powell and Paddy Roberts’s “You Are My First Love,” the results are sublime.