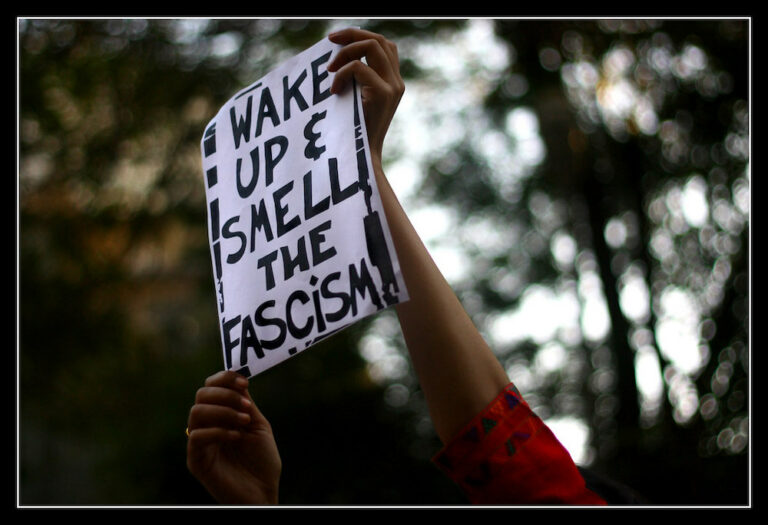 "Smell the Fascism" by Abhisek Sarda is licensed under CC BY 2.0. To view a copy of this license, visit https://creativecommons.org/licenses/by/2.0/?ref=openverse.

Reality Check: DONE WITH REPUBLICANS – A STUDY IN FUTILITY & FASCISM

And a pathetic attempt to wake up feckless Democrats.

Anyone who has read this space for the past quarter century knows I am a man without a party. Reality Check has been the Freethinker Corner of political and social discours and will remain so, but over that time I was also a citizen of these United States and a voter. Unlike many who claim to be Independent but always vote for one party, I have actually voted for members of both. That stops today. The man who voted for George W. Bush, called former NYC Mayor Rudy Giuliani the most effective politician of my times, and wrote glowingly about my dear friend Rob Astorino, while also openly providing funds for his first successful run for Westchester County Executive, is now forced to become a deep-throated opposition to the Republican Party. Its legitimacy ends here and it must be stamped out like a deadly pox.

This, of course, does not mean I will become a Democrat. As, again, stated here for decades of writing this wretched weekly diatribe, I will remain staunchly Independent. But in order to stem the tide of this political cancer on democracy known as the Grand Old Party, I must make it my business (given the system we endure) to expunge its barely breathing remnants from my home state of New Jersey and I guess just hope that the country never again completely falls into its hands as it did during the dark days of Donald Trump.

This will not merely be a column to bash Republicanism. No one knows what that is – no one has ever known. Today, Ronald Reagan, the patron saint of modern conservatism, would be considered a liberal. Can you imagine his work with the Soviet Union today? It would be called appeasement. Can you imagine his work to restructure immigration? It would be called anti-American. Can you even fathom what his work to save Social Security with the Democrats would be deemed? Traitorous.

Nope, this will also be about the useless and weak Democratic Party that failed to protect the rights of women for decades, assuming Republicans would play by unspoken third-rail rules. They let fascist/zealot judges be jammed into positions to politically undermine the Constitution, and even allowed the type of bottom-feeders into national office that would produce the Patriot Act and normalize torture. Where was Barack Obama for eight fucking years after that miserable shit? Where was the press when the Republicans refused to vote on his Supreme Court nominee and then ramrod another within weeks of the 2020 election to overturn Roe v Wade? They all failed us and continue to fail us.

Joe Biden has got to stop speaking; just put his dumbfounded empty suit out to pasture. He did his job in getting the racist/misogynist fence-sitters in the Rust Belt to vote against Trump in 2020. Thank you. Now, move on, because since then it’s been a bust. He must cease talking about Executive Orders and Health Crisis. He needs to get out of the way and allow some mean-ass dogfighter to kill the filibuster and add four goddamn normal judges to overturn this political coup. Democrats yelling about voting never helps. Republicans clearly don’t care about voting. They are putting a stop to that atavistic crap in half the states in the Union. Elections don’t matter when Republicans are involved, so it shouldn’t for those opposing them. It is political warfare being fought by radicals versus high school level debate nerds.

But the main take here is that the Republican Party is a dead issue now as a real alternative to voting, if you insist trying this antiquated exercise to stop the crazies. I am sure a vote of no-confidence in Europe was enough to expunge the Nazis or the reprimanding of the South figured out the slave issue. And if you think this is Campion’s usual hyperbole, I offer January 6, 2021.

Who can accept the Republican party’s support/excuse/dismissing of the horrors of the January 6 insurrection by the terrorist Trump and his cronies who decided election results don’t matter and monarchy is a thing? Not this guy. If polls are to be believed, and this is a thorny issue, his party will doubtless put him back on the ballot for 2024, unless he goes to jail or decides he doesn’t need the aggravation. The Justice Department is useless. The Democrats keep talking. And a terrorist will represent one of the two major parties.

Well, fuck that and fuck Republicans.

Look, you might want to live in a democratic construct that strips the rights of women to control what goes on inside their bodies and leave us with 10-year-old rape victims having to be ushered across state lines for an abortion or wise-asses (and I shall always support wise-asses) who use the special commuter lane for at least two passengers because they’re pregnant (a good one). Fetuses should be allowed social security numbers and pregnant women can claim them as dependents. The Woke Pro-Lifers want you to change your birthday to the day your father shot a load in mommy.

This is not only thanks to the Republican Party’s decades-long war on women finally won, but asleep-at-the-wheel Democrats for thinking they were merely an opposition party and not a fascist insurgence.

Let’s finish up this proclamation with fascism, specifically the January 6 “issue.” It is painfully clear that both parties fall short in describing what it was: Domestic Terrorism. Semantics are important. There are many who described 9/11 as freedom fighting and other as an “inside job.” (I’m looking at you, Q-Heads.) Still, at least Democrats and some Republicans are concerned about this. The rest are trying to take down the United States. Shit, I expect pundits and goobers in the private sector to run that rancid dung up the flagpole, but members of two of the main parties? (And in the most minority-led way, because there are way fewer Republicans than Democrat and sane Independents out there, you can just see five of the last six national elections popular vote tally).

So, stop sending me campaign junk, Republicans, and if you are a friend and hope to run as one, go somewhere else for a voice.