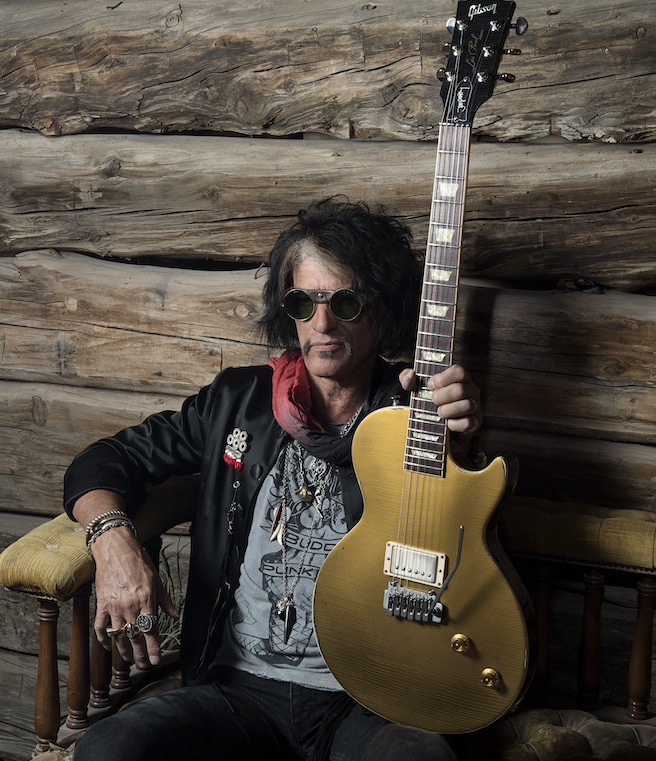 The Adventures of Joe Perry & His Rock & Roll Longevity

It doesn’t matter if it’s creative solo endeavors, big band undertakings, or artistic ventures with friends, because the fact of the matter is: everything that Joe Perry touches is rock and roll at its finest.

Joe Perry is legendary as the guitarist for Aerosmith, one of the most popular hard rock bands of all time – and, for more than forty years, he’s also been successful with his own band, The Joe Perry Project. That latter group is set to play five shows this month, including one on July 23 at the Atlantic City Hard Rock Casino in Atlantic City, N.J. During a recent call from his home in Florida, Perry says he’s looking forward to returning to that popular Garden State venue: “I’ve played there a bunch, and I’ve also been in the audience there a bunch of times,” he says. “It’s a really good venue. I really like playing there.”

Still, Perry admits to feeling a mix of emotions as he contemplates playing his first shows for live audiences since pre-pandemic days. “When I go out and do solo stuff, usually I played last month with Aerosmith or something,” he says, “but after not playing for, what, two and a half years? The actual thought of walking out onstage with a guitar and having all those people looking at me going, ‘Well?’ It’s a little daunting. I’m looking forward to it, though.”

His bandmates in the Joe Perry Project are keyboardist Buck Johnson and bassist Chris Wyse, who have both played with Perry on tours for Aerosmith as well as The Hollywood Vampires, his other band with Alice Cooper and Johnny Depp. The drummer, Joe Pet, “is a charter member of the Project,” Perry notes. “And then on vocals we’ve got Gary Cherone from Extreme, and he kills it, whether he’s singing my stuff or Aerosmith’s stuff.”

These Joe Perry Project shows will also help him prepare for the work that will immediately follow: “It’s going to be really good for me to get warmed up for the Aerosmith 50th anniversary stuff,” Perry says. “Over the next year and a half or so, everything will be about that. We’ll play all around, try and go to places we haven’t played in a long time, and celebrate playing together for as long as we have – which is a miracle in itself. It wasn’t without a lot of blood, sweat, and tears, I’ve got to tell you.”

Aerosmith became one of the most popular acts of the 1970s with hits such as “Dream On” (1973), “Sweet Emotion” (1975), and “Walk This Way” (1975). Perry’s unique guitar playing style, rooted in melodic blues, was a key element in the band’s sound, eventually leading him to become one of the most influential musicians in hard rock.

“I get asked all the time, ‘How did you get that tone? or ‘Why did you play that?’” Perry says. “I guess it’s because I didn’t want to sound like anybody else [when Aerosmith started] – I wanted to be original. I didn’t really have as much to offer at that point, but we kind of just learned as we went. You can tell by the albums. You listen to the second album, there’s more competence there. Then the third album, we started writing in the studio and learning how to use the studio. By the fourth album, we were constantly touring and playing and seeing what worked, seeing what the fans liked. We never lost sight of the fact that we were there to entertain the fans. We’re there because the fans are there.”

Even though Aerosmith was one of the biggest bands of the 1970s, intra-band disputes and members’ addiction issues eventually let them to take some time apart. In 1979, Perry left the band; two years later, their other guitarist, Brad Whitford, also departed. “We also made a lot of mistakes. We took a lot of risks, and we had things that didn’t go the way we expected. We totally burned out and split apart for a while,” Perry says. “We had been playing together for almost eight years, just nonstop. I remember taking two vacations, and that was it. And the rest of it was, we were on the road or we were in the studio. So we had to take a break.”

As dark as those times were, though, “We just learned from it,” Perry says. “Then we built up again.” He and Whitford re-joined Aerosmith 1984. All of the members were sober and ready to start again, but Perry admits that it was still a nerve-racking time. “Coming back, it was seeing if we could play together, [after] all the ups and downs we’d had in the ‘70s,” Perry says. But, he adds, “We realized we’d gotten through a lot of that bad stuff, and we were playing better than ever.”

To their relief, “The fans were there – I can’t say thank them enough for being there to support us, because we didn’t know how we were going to be received, or if we were going to be forgotten,” Perry says. “That was the start of our second career.”

They became ubiquitous on radio again, and they also quickly learned to make the kind of videos that would make them ever-present on MTV, starting with their groundbreaking collaboration on a new version of “Walk This Way” with the rap group Run-D.M.C. in 1986. More hits followed across the rest of the 1980s and 1990s: “Dude (Looks Like a Lady),” “Angel,” “Rag Doll,” “Love in an Elevator,” “Janie’s Got a Gun,” and “I Don’t Want to Miss a Thing,” among many others.

Perry believes that Aerosmith were able to rebuild their career because “We were always willing to listen if somebody had some advice – and we were able to listen to each other, which was the most important thing. We were willing to get in a room, and if one guy wasn’t holding up his end, you’d have to sit there and hear it from the other guys. And I know from seeing other bands, they could never do that. They would just to leave and say, ‘I’ll never play with that guy again.’ I don’t think we ever got to that point. We always knew, no matter what, if we stuck together, we would be able to get somewhere.”

Besides loyalty to the band, Perry also believes that a high work ethic has had a lot to do with this career success. “I was brought up to think that if you worked hard enough, you can do what you want – and I worked really hard to get where I am,” he says. “It wasn’t about being driven around in a limousine or awards shows – I’m really not in it for that. It was about how music made me feel, and I wanted to be able to try and do that. It was to play guitar with my friends and maybe – maybe – get in the studio and make some music. And that was it.”

By any measure, that modest goal has been wildly exceeded. According to the Recording Industry Association of America (RIAA), Aerosmith are one the top-selling hard rock bands of all time, with multiple platinum and gold-selling albums to their credit.

“I like to think that it’s because the music is diverse,” Perry says of Aerosmith’s longtime appeal. “It’s not like we play just one kind of music. We play hard rock. There’s maybe not really heavy metal, but we play some things bordering on that. Then we also play ballads. It’s kind of hard to put us in a category, but I think that when you can appeal to different people across the board, that ultimately gives you the longevity.”

Now, with Perry heading back out on the road with his own band and with Aerosmith, he looks forward to communing with live audiences again. Besides playing for them, Perry says it also means a lot when fans tell him how his music has been an important part of their lives. “People come up and say they got married to “Dream On.” Then there’s other people that come up and say, ‘When you guys played, it made me want to go out and pick up a guitar,’” he says. “I’m really honored to be able to hear that from people.”

FOR TICKETS AND INFORMATION ON THE JOE PERRY PROJECT’S ATLANTIC CITY STOP, CLICK HERE! TO KEEP UP WITH PERRY, VISIT HIS WEBSITE, AND FOR AEROSMITH NEWS, CHECK OUT THEIR WEBSITE!