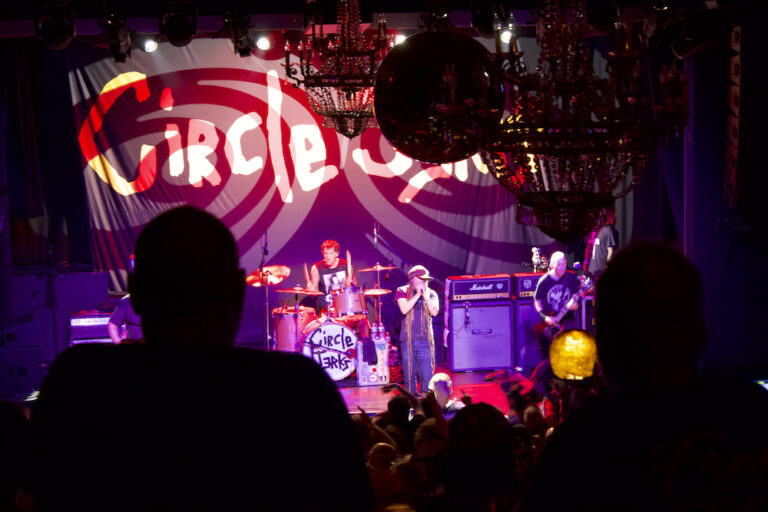 Circle Pits for the Circle Jerks: Night 1 at Irving Plaza

Keith Morris is still kicking it with his band and his friends – on stage and off. Why? As he told us in our headline feature last week, “People want to come see us and we’re doing really, really well; selling out just about every show and the majority of the people talking to us have nothing but great things to say about us, so we’re obviously doing something right.”

For over 40 years, the Circle Jerks have been one of the important bands to hardcore punk. Helmed by frontman Keith Morris and featuring a current lineup of bassist Zander Schloss (The Weirdos, Joe Strummer), guitarist Greg Hetson (Redd Kross, Bad Religion), and drummer Joey Castillo (Queens of the Stone Age, Wasted Youth, etc.), the band brought their indisputable attitude to Irving Plaza for two sold out nights.

Along with them were two contemporaries also celebrating 40 year anniversaries: Negative Approach and 7 Seconds. Everyone aware of this massive lineup had to witness the spectacle, including Jimmy G from Murphy’s Law who I ran into.

The genius of punks never fails. I witnessed two young punks lighting a joint before the show started… next to a curtain… next to the smoke alarm. Brilliant.

Mohawks, skins, dreads, people clad in crass T-shirts, Fred Perry polos, and suits all showed up early for Detroit’s Negative Approach. They hit the stage promptly at 8:00 p.m. with bassist Ron Sakowski, drummer John Lehl, guitarist Harry Richardson, and vocalist John Brannon ready to rip. “Thanks for coming out early,” said Brannon during some feedback. “Let’s party!” An assault of ferocious music and speed was unleashed, setting the crowd off.

Brannon is an incredible frontman. The power in his screaming combined with his firm scowl are only two of many reasons for Negative Approach’s longevity and legacy. Richardson had his back facing the crowd for the duration of the set and he played to his amp. Sakowski’s bass tone from his Orange amp was just as massive as his beard. They are one of the greatest living hardcore bands, and I was floored witnessing their frenetic set. Only a half hour long, but 22 songs including covers of Sham 69 and the Stooges.

7 Seconds burst onstage following a playlist of eighties new wave with one of their staples, “Here’s Your Warning.” Bassist Steve Youth, guitarist Bobby Adams, drummer Troy Mowat, and frontman Kevin Seconds started a mosh pit almost instantly; showers of beer and the cans from which it came. As the pioneers of the youth crew genre, 7 Seconds have been an inspiration for hundreds of bands. The other photographers and myself had our photo passes cut short because of too many crowd surfers.

“Thank you everyone,” said Kevin after a few songs. “It’s so good to finally be back in New York. We’re all standing upright, so are you. It’s nice seeing a good mixture of old and young at this show. Here we go.” In the process, he lost his glasses and acquired a Les Paul and joined Adams.

With braids whipping and micstand jousting, Kevin Seconds brought energy. Their mixing was also really stellar. 21 songs, including their popular cover of Nena’s “99 Red Balloons,” and the band finished their short set to a playlist of strictly Herb Alpert and the Tijuana Brass.

Following their set, the Circle Jerks came onstage. Keith, in jeans and his tattered Germs shirt, asked the crowd, “Is everyone enjoying Herb Alpert?” Scattered applause. He then told the infamous story of Herb Alpert forming A&M records and wanted to sign the Circle Jerks, but the A&R reps all had a meeting and decided CJ were not a good fit. Morris joked they could’ve had Joe Cocker on backup vocals or bring in Peter Frampton on guitar, but to no avail.

After Keith introduced everyone onstage, they launched into “Deny Everything” and Keith leaped into the air. For a 66-year-old, he is spry. He sounds great, looks great, and moves better than other musicians his age. The pit was skanking away as the band played a crucial hit after the next; “Behind the Door,” “Beverly Hills,” and “Trapped.” Following “Wild in the Streets,” a heckler shouted the ever original “Free Bird.” “Free Bird?” asked Keith. “Despite the fact Lynyrd Skynyrd is a bunch of Confederate flag waving guys, that does not detract from a good song. But back to the Circle Jerks stuff – this next song is called ‘Moral Majority.’”

Zander, Joey C., and Greg are a cohesive unit. Keith addressed Joey C. on drums as the reason this tour is happening, the MVP that has kept the other three from killing each other on the road. (Rehearsals for this tour must have been extensive because everyone sounds sharp.)

Before “Beat me Senseless,” Keith addressed the message behind the song; “This song is dedicated to all the motherfuckers and motherfuckerettes out there that only care about your money. They hate you. They only care for you when you’re giving them your money. I’m Keith, running for King of the World. When I get there, they’re all going to be slaughtered; heads rolling in the street, a bloodbath. I’m Keith, and I approve this message.” He also told us to be the change we want to see in our corner of the world.

The final batch of songs included “World up my Ass,” “Operation,” the Black Flag song “Wasted,” and “Red Tape.” A short three song encore of “I Wanna Destroy You,” “What’s Your Problem?,” and “Question Authority” started and finished quickly, but not before eruptions of applause. 33 songs in just over an hour is no small fear, but it was a historic lineup at a venue with deep mutual history.

Keith is quite a character; perverse and wise, yet principled enough to refuse singing someone’s breasts and nuanced enough to inspire a child to be the best President of the United States. It was a delightful show and another rite of passage further contributing to my punk cred.