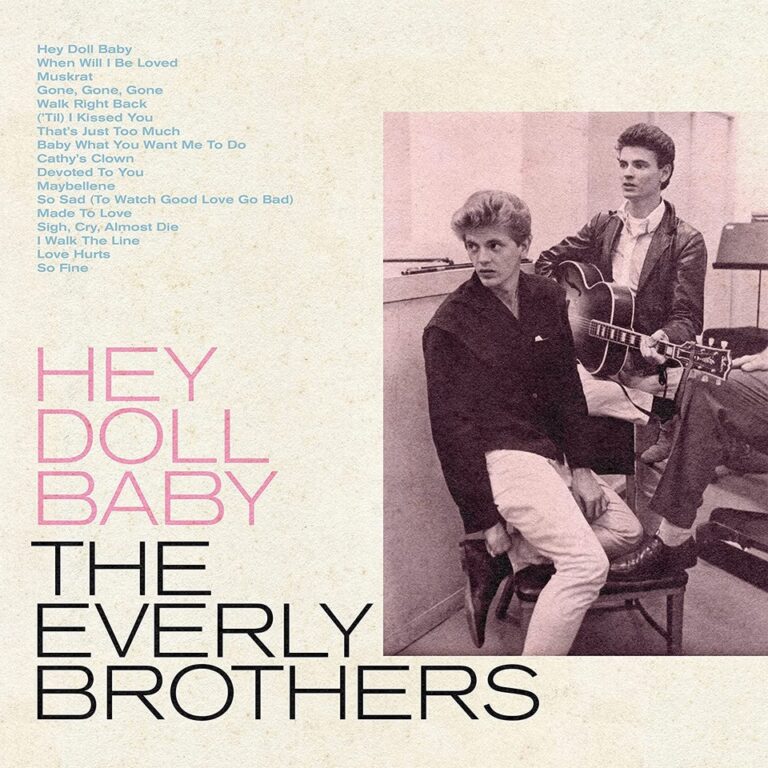 Everly Brothers, Hey Doll Baby. If you’re an Everly Brothers fan, you may already own at least some of the selections on this 17-track anthology, which Don Everly worked on before his death last year and Tom Petty’s daughter, Adria, assembled. The set includes remastered versions of some of the duo’s biggest hits, including “When Will I Be Loved,” “Walk Right Back,” “Cathy’s Clown,” “(‘Til) I Kissed You,” “So Sad (To Watch Good Love Go Bad),” and “Devoted to You.”

However, Hey Doll Baby eschews other well-known numbers in favor of deep cuts that showcase the brothers’ rockabilly roots. For example, the collection unearths covers of Johnny Cash’s “I Walk the Line,” Chuck Berry’s “Maybelline,” and Johnny Otis’s “So Fine,” none of which even made it onto 1994’s wide-ranging four-CD Heartaches & Harmonies box set.

Hey Doll Baby, which includes notes by both Adria and Phil Everly’s son Jason, offers a reminder of just how good the brothers could sound. The 1994 box should be your first purchase, but this CD is worth having as well.

Paul Kelly, Time and Rivers & Rain. Australian folk-rock singer and songwriter Paul Kelly has begun digitally reissuing some of his old material in themed albums, starting with Time, which is available now, and Rivers & Rain, which will be out July 29. To get an idea of just how prolific he has been over the years, consider that the former release, which includes 30 tracks and runs for nearly two hours, doesn’t even embrace everything he’s written about its subject.

There’s a lot to like in both of these collections (which incorporate a little bit of overlap), including “How to Make Gravy,” Kelly’s poignant holiday letter home from a man in prison; “You’re 39, You’re Beautiful, and You’re Mine,” a touching love song whose title plays off that of the Johnny Burnette oldie; and “Moon River,” a cover of the Henry Mancini/Johnny Mercer classic that first appeared on the live Goin’ Your Way, an album of duets by Kelly and Crowded House’s Neil Finn.

Todd Sharpville, Medication Time. Sixteen years ago, a reportedly “messy” divorce triggered a mental breakdown and two months in a mental hospital for British blues artist Todd Sharpville. The guitarist and singer/songwriter, who has been releasing albums since 1992, mines that experience on the potent Medication Time.

Matt Lomeo, When You Call. L.A.-based singer/songwriter and harmonica player Matt Lomeo is rooted in the blues but has clearly absorbed a lot of other music as well, as evidenced by a motley list of named influences that includes Marvin Gaye, Frank Sinatra, Johnnie Taylor, and Elvis Presley. You can hear hints of all those leanings in the diverse and consistently likable When You Call, which finds Lomeo backed by a capable sextet on a 13-song set of originals (two with co-writers).

If you organize your albums by genre, you’re going to have a tough time figuring out where to put this one. The organ-flavored “One More 1&1,” a drinking song, sounds like something Boz Scaggs could have recorded while the lively “Unsentimental You” and a ballad called “She Was the Best” seem redolent of 1950s pop-rock. It’s easy to imagine a Motown act like Stevie Wonder or the Supremes covering “Accepting Applications.” And then there’s the countrified “27,” which is set in Memphis and references honky-tonk angels.

In “Vanlife,” for example, the protagonist quits a minimum-wage job, comments on Elon Musk, heads out on the road, and encounters a nasty cop and an unfriendly well-to-do-homeowner. The album’s spoken-word title track finds Carlisle searching for truths in a Walmart and briefly quoting Carl Sandburg. And then there’s “Tulsa’s Last Magician,” the album’s deftly written best song, about a man who practiced “all his worst mistakes in a dirty bathroom mirror, and when his mother drank, he learned to disappear.”

The Local Honeys, The Local Honeys. Eponymous titles often signal debut albums, but the Kentucky-based Local Honeys – a duo consisting of Linda Jean Stokley and Montana Hobbs – have been around for a decade. Still, says Stokley, “this is the first time we’ve actively gotten to express who we are and where we’re from.”

Excepting Jean Ritchie’s “The L&N Don’t Stop Here Anymore,” the program consists solely of originals, five by Stokley and four by Hobbs. Their sweetly sung Appalachian country/folk songs sound modern and so do a few of the lyrics, such as the ones for “If I Could Quit,” which concerns the current opiate epidemic. Most of the songs, though, evoke bygone or fading eras in rural Appalachian life, with references to horse traders, outlaws, miners, and World War II.