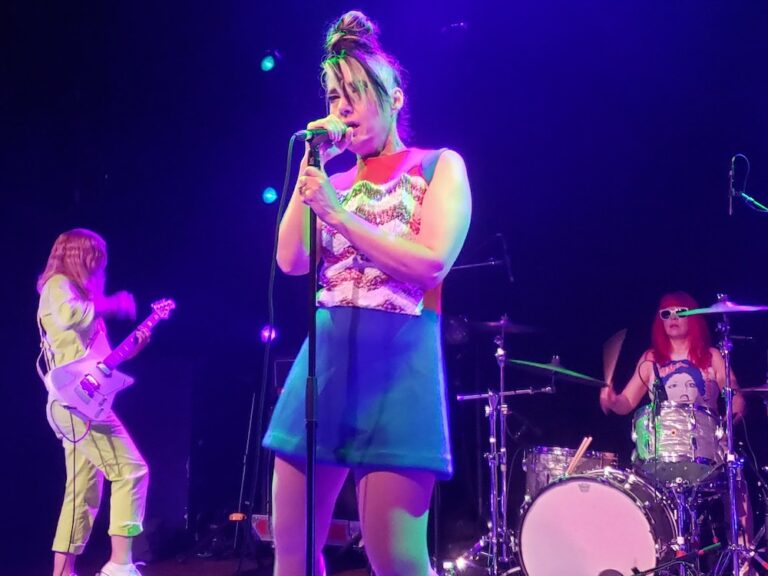 Perhaps in some clairvoyant way, the increasingly volatile political and social climate in the United States necessitated a reunion of Bikini Kill. The feminist punk rock band uniquely pioneered the riot grrrl movement upon forming in 1990 in Olympia, Washington. Throughout the 1990s, Bikini Kill was outspoken against the status quo, although heard mostly by rock music aficionados, and the band became a musical mouthpiece for an underground network of angry and disenfranchised youth.

Bikini Kill disbanded in 1997 after two albums, several EPs, and two compilations. The musicians joined several short-lived bands. Surprisingly after more than 20 years apart, the three original Bikini Kill musicians reunited, recruited a guitarist for a concert tour in 2019, and intended to continue live performances into the next year. The next surprise was that the musicians would be forced to take a COVID break in 2020 and 2021. Undeterred, Bikini Kill rescheduled dates and returned to the stage in 2022. This week, original vocalist Kathleen Hanna, bassist Kathi Wilcox, and drummer Tobi Vail, along with touring guitarist Sara Landeau of the Julie Ruin, returned to New York City for two concerts.

Hanna has affirmed in interviews that the band has no immediate plans to compose or record new music. Indeed, the set at Irving Plaza was entirely a revisit to the Bikini Kill legacy of the1990s. While many reunited bands tend to polish their old songs, Bikini Kill kept the music raw and minimal. Hanna yelled and yelped into the microphone, Wilcox gave the songs a deep bottom, Vail’s pounding was primitive, and Landau churned chords and riffs and sporadically offered a lead melody line on her guitar. Together, the coarse music charged at a speedy pace, with Hanna in particular responding to the intensity of the music by repeatedly dancing wildly in place.

On two songs, “I Hate Danger” and “Tell Me So,” Vail moved front and center to sing. To accomplish this, all the musicians changed instruments and assumed new stage positions. Hanna moved to bass, Wilcox moved to guitar, and Landeau played drums. The impact of the music remained equally brash and forceful on these songs.

The power of Bikini Kill’s 26-song set came not from the technical ability of the musicians, however. Bikini Kill’s mark in music history was primarily about the band’s roaring stance on empowerment for the oppressed, especially for female-identified folks. “Don’t Need You” stripped the men in the audience of their domination over women. “Jigsaw Youth” took a defiant stand against stereotypical expectations. By the time Bikini Kill got to “Rebel Girl,” what woman in the audience would not want to be the band’s rebel girl? Maybe the first song of the two-song encore, “Double Dare Ya,” summarized it all; the song’s lyrics started with “We’re Bikini Kill and we want revolution girl-style now!”

Throughout the evening, Bikini Kill and its audience bonded in lighthearted ways. Hanna frequently stood at the edge of the stage and performed directly to the fans in front. Someone in the audience called out for the song “Tony Randall” and, although unplanned, Hanna sang two lines, stating “I like that song still.” Between-song chatter from Hanna sometimes articulated mobilization as the path for social change.

Bikini Kill was out of sight for a couple of decades, yet a modern audience is craving for the band’s abrasive punk music, feminist lyrics and fiery performances. Several of the fans leaning against the front barricade were not even born yet when Bikini Kill led the riot grrrls. Even without new compositions to bring Bikini Kill into the 21st century music world, the band successfully retained its vitality and spoke the language of a new generation. The unanswered question is whether Bikini Kill will remain together or if the current tour was a flirt with the past.