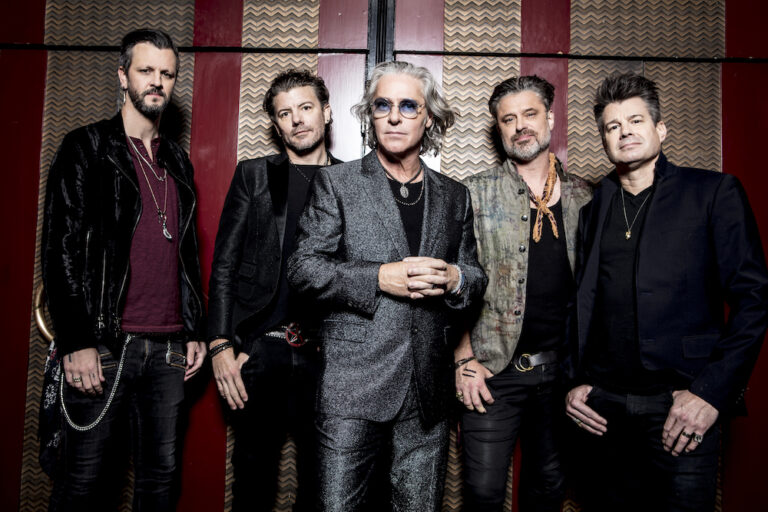 “Lift me up, throw me down,” the mystifyingly underrated Collective Soul sing on their new single, “Cut the Cord.” A raucous, hard rocking number like this one, with lyrics and musicality as edgy and enthusiastic as it has, deserves to be heard live. The track is an experience and you, too, can get in on that at the band’s Long Island and Manhattan concerts this very week.

Dean Roland, rhythm guitarist for beloved alternative rockers Collective Soul, calls from New Jersey as his band makes their way to the tri-state area to play The Paramount in Huntington, New York on August 3, then Palladium Times Square in New York City on August 4. They’re about a month into their tour – their first extensive run of shows since the pandemic began, and also their first with San Diego rockers Switchfoot. “It’s been great – we’re having a blast,” Roland says. “The shows have been going well. It’s exciting to do what we love [again] – and a little bit of an adjustment because we were home for so long – but it was long overdue for us.”

These shows feature a handful of new songs from Collective Soul’s latest album, Vibrating, which will be released on August 12. This album (their 11th) is another thing that might be overdue because, as Roland explains, “We had recorded this record before the pandemic. We had intended on releasing it last year, if not the year before. But when we couldn’t tour along with it, we decided to hold off.”

Vibrating got its name from the creatively productive time when Collective Soul were writing and rehearsing these songs, when they found that they were “throwing the vibes,” as Roland puts it. “I think we were just in that zone where we were doing a lot of music where we were kind of vibing.” The term “vibrating” seemed like the perfect way to sum up that feeling.

Now they hope to share that same excitement and emotion with live audiences as they play both these new songs as well as drawing from material from across their three-decade career. “It’s what we love doing, so hopefully it’s a shared experience where people are enjoying themselves, having fun, and escaping real life for a minute through the songs.”

The way Collective Soul connects with fans is especially evident when they play their hits; which, Roland says, they never get tired of doing. He points to their debut single “Shine” (1994) as an example. “Really, as many times as we’ve played the song – and we’ve played it thousands of times at this point – every night, you have to allow it to be new and in the moment. There’s somebody out there that may be hearing it for the first time, or hadn’t heard it that many times, or hadn’t heard it live. it’s going to have its own unique moment in time. You just have fun with it.”

“Shine” and their other hits, such as “The World I Know” (1995), have earned Collective Soul a fervent fanbase, enabling the band to become one of the most enduring alternative rock bands of the past 30 years. Roland believes this has happened because the band (which he co-founded along with his brother, vocalist Ed Roland) didn’t follow any formulas, which made them utterly unique when they emerged out of the Atlanta rock scene.

“We never really chased any particular sound or a trend in music,” Roland admits of those early days. “We just went for what felt good to us, organically. I’d like to think that that’s played a role in sticking around and being able to make music for so long, because it really is an authentic thing for us. It’s not contrived.”

He also credits his brother with crafting lyrics that resonate strongly with listeners: “Ed’s coming from a place of what’s going on emotionally in his life, and the authenticity comes through.” In that way, when listeners hear it, “Maybe there’s some emotional attachment and relatability from life experiences.”

The Roland brothers first started their musical journey together when they were growing up in Stockbridge, Georgia, a town just southeast of Atlanta. “We always played music growing up. Our father was a voice major in college, and later became a Southern Baptist preacher. So music was just always around us, and it just felt natural. It really wasn’t like this conscious decision, like one day I said, ‘I’m going to be a musician.’ I just was a musician.”

Despite the contentiousness that can befall bands that include siblings, Roland says he and his brother have never had a problem working together. “We’ve had our moments, but for the most part, we appreciate each other,” he says. “We have a lot of similarities, but we’re different in a lot of ways, too, which helps complement. We’ve learned to overcome any kind of head-butting. [It’s] better to work.”

Now that it’s exactly 30 years since the brothers formed Collective Soul in 1992, they and their bandmates are feeling as creatively inspired as ever. “That’s the important thing: you have to continue to allow yourself to be motivated and inspired and express whatever that may be,” Roland shares. “I think you have to continue to be curious about what’s next and follow the passion of music – that’s what keeps us together. We just genuinely enjoy it.”

FOR TICKETS TO SEE COLLECTIVE SOUL ON AUGUST 3 AND 4 IN OUR AREA, CLICK HERE! PRE-ORDER THE BAND’S NEW ALBUM, OUT AUGUST 12, HERE!