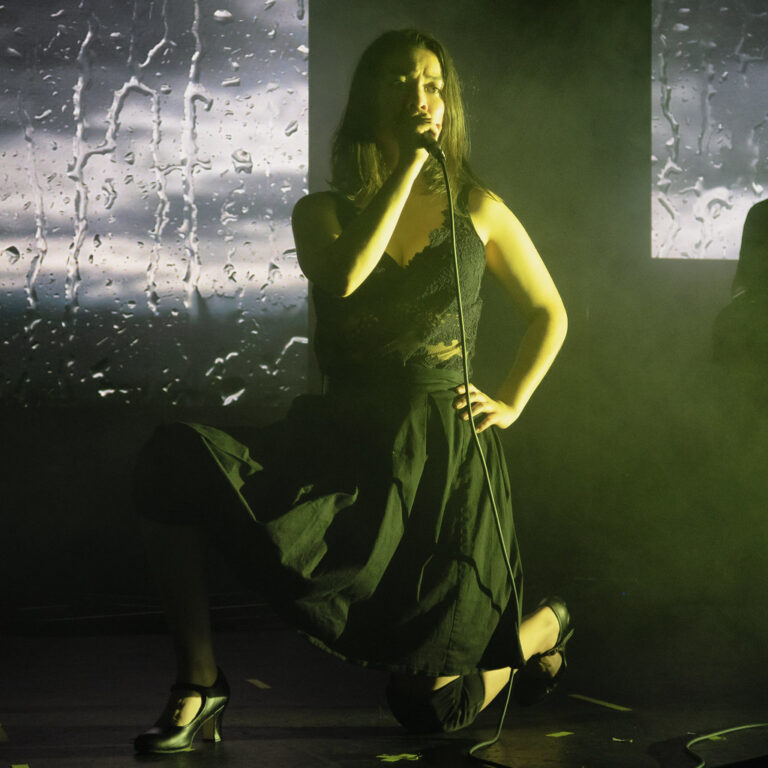 "Mitski" by davidjlee is licensed under CC BY-SA 2.0. To view a copy of this license, visit https://creativecommons.org/licenses/by-sa/2.0/?ref=openverse.

Finally, after months of postponement, Mitski had the chance to simply stun Radio City with raw energy and pure power.

Mitski Miyawaki is the person behind the soundtrack of what might be called ‘the ugliness inside us all,’ inside of reality. In truth, there’s nothing ugly about it. Her music is a fortifying effort against the commonly established idea that your mistakes are something to be ashamed of, that only certain emotions are ok to hold and others are wrong. Mitski embeds confidence into vulnerability; she’s often introspective and never afraid of commenting on the ideologies we live in. Her writing style can be at times blunt and self-deprecating – something that gravitates her fanbase to her.

Despite the constant commodification of artists’ lives, Mitski leads a mostly private life. She was born in Japan but often moved around the world as her father worked for the U.S. State Department. The constant relocation at a young age is part of what Mitski states as one of the driving forces behind her issues with attachment. She released her first two LP’s while studying at SUNY Purchase College’s Conservatory of Music. Since then she’s released critically acclaimed albums from Puberty 2 to Be the Cowboy. The performer is widely regarded as one of the best songwriters of today by fans, critics, and contemporaries. Iggy Pop has even stated, “For me, she’s probably the most advanced American songwriter that I know.”

Her privacy never falters her popularity, though, as her music has its viral moments on social media (such as TikTok) and before this short run of dates, she was the opening act for Harry Styles during a section of his UK shows. This concert at Radio City, along with a handful of others on the east coast, were originally part of her larger tour from earlier in the year supporting the release of her sixth studio record, Laurel Hell. Unfortunately, these shows had to be postponed until now due to a COVID case in her touring party.

The stage design for the set was very minimal on July 22. Mitski stood in the center with her band franked on either side, nothing except for a single door standing in the center background. For the entire duration of the show she hardly interacted with it, except for a moment where she would knock on the door during “Should’ve Been Me”. It’s a daunting object, its representation never obviously explained but it’s certainly more than just a door.

From her first record, Lush, there is a song aptly titled “Door” where she speaks of a particular entryway that she can’t seem to find despite often coming so close to it. “There is a door to me / I’ve never seen it / Sometimes I get closer to it / But I’ve never found it.” When she finally makes contact with it, it reveals that beyond its entrance lies what Mitski describes as a hopeless violence; what she calls love. Although it’s been years since that record, which was a 2012 release, the meaning of that door has most likely evolved, but its power never changed. Mitski’s choreographer, Jas Lin, notes that the door leads to a tunnel that the artist runs through as lights form around her hands, “her feet, moving her from memory into futurity”. It should be noted that on this particular night, Mitski never opened the door, and this was always different for each show.

There’s a lot to unravel about the singer-songwriter’s thematics, even that seemingly simple door. It is on the Mitski brand, however, as in previous tours she would use a household table and chair on stage, dancing and posing around them, using them as a representation of objectification towards women – particularly Asian women.

Starting off the set, Mitski fittingly played “Love Me More,” a stunning song about using other people’s love as a distraction for fulfillment. Instead of playing the first chorus in the same style as the recording, the band and Mitski build it up to no release, holding the tension. Finally, the band erupts into the final chorus “I need you to love me more / Love me more, love me more / Love enough to fill me up.”

Apparent already in the opening song is the way in which Mitski moves and dances throughout. It’s a style of Japanese theatrical dancing that the singer and her aforementioned choreographer are fond of called Butoh in which performers display slow but hyper controlled movements that often depict imagery of distress yet can be motivated by many things. The movements can range anywhere from playful to grotesque to absurd.

In Mitski’s performance of “Working for the Knife” at Radio City, she combined that grotesqueness with violent and sexual movements. At one point she’s swinging her hand out imitating a gun firing while all in one motion moving her hand down between her thighs, at another time holding the mic towards the crowd before slicing it across her neck then moving down her body. It’s intense in every manner, only highlighted by the song’s themes of disregarding people’s humanity and, as Mitski has stated, late capitalism.

The movements were mechanical at times, but also so human as both can be seen expressed during “I Will.” Mitski clapped her hands against her folded arms along to the steady beat of the kick drum before softly singing the intro “I will take good care of you / Everything you feel is good / If you would only let you.” She then gestures her hand across her body into the air before hitting her high notes in the first chorus. It’s a bare track in its first minute until it swells in the middle of the second verse which is when Mitski threw her hands embracingly high in the air. At every moment it was a beautiful song – lyrically, vocally, instrumentally.

“Washing Machine Heart” is one of the best moments in the show’s set that proves how her fans are deeply ingrained and in tune with the lyrics. In the first verse as she makes rhythmic circling motions with her arms, she began singing before only allowing the crowd’s screaming to make up the rest of the verse: “toss your dirty shoes in my washing machine heart / baby, bang it up inside.” Mitski peeped out a “go ahead” to the audience as they took over the number.

It was about halfway through the set when we realized that Mitski is truly banging out songs left and right, each containing so much raw energy and power – even when some tracks having run times no longer than two-and-a-half minutes. At this halfway point, Mitski asked if everyone is “sufficiently” warmed up. At another moment Mitski, as she states she breaks character, she expresses her love for New York as she for a time lived in the city (though even more importantly the singer expresses her love and admiration to her fans).

While there’s motifs of being withdrawn, there’s plenty of explosive moments of song and dance that takes over the star during songs like “Townie” and “Me and My Husband.” During “Drunk Walk Home” she falls to the floor to sing in a curled up position until she grows to an upright position accenting “fuck you and your money” while the drums get into an impending, repetitive tom groove. Then as the band began exploding into the song’s instrumental interlude, Mitski holds one arm still as she pounds the other hand towards the ground in time with the heavy guitar strums.

One of the singles off Laurel Hell, “The Only Heartbreaker,” is an eighties synth pop tune. On one hand it’s about being the “bad guy” in a relationship, but the performer herself states it takes on a double meaning in how maybe this person only ruins the relationship because they’re the only one trying to do anything about it. The warm synth chords play along with a reverberated, lush guitar that flurried notes during the verse. Oh, it just sounds so good live.

Theatrical is a fitting descriptor for this show and being ever so appropriate for Radio City Music Hall. There are only so many artists out there right now, especially those with the same popularity and more, that can put on a show that leaves you as stunned, moved, uplifted, and thoroughly absolved of preconceived notions of what it means to be a living person as Mitski can.

Mitski’s music has taken on many names throughout her discography from critics, fans, and many others. A few handful people may attempt to group her sound into a single “genre” of “sad indie girl music;” something that unfortunately many female artists get thrown into when someone gets the slightest hint of a reality check from them. Certainly there’s sad, somber moments in Mitski, but you’d be making a mistake in stopping there. From confidence to ugliness, realism to idealism, there are a variety of sights and sounds based in overall badassery, which, more often than not, is when genuine happiness comes out. In so many ways, Mitski is one of the best songwriters music has ever seen and she showcased that in New York.