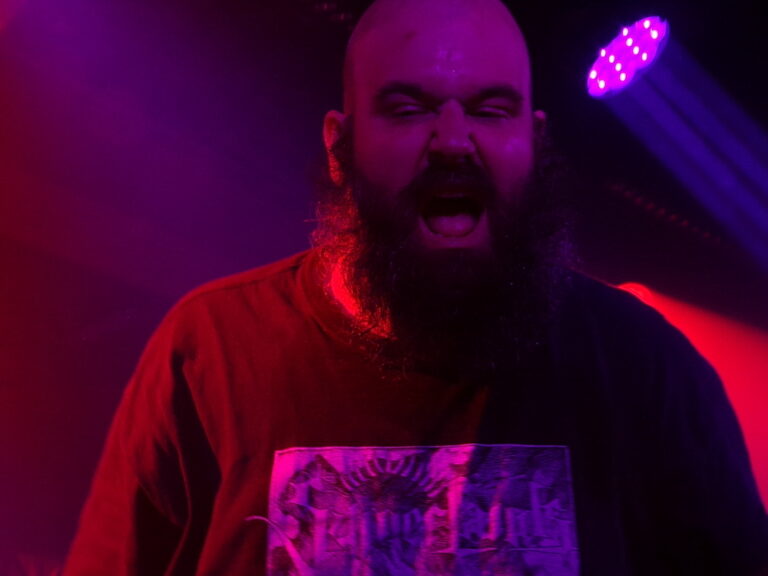 The first wave of hardcore punk music in the late 1970s and early 1980s was direct impact music nurtured by anger and aggression. The music was fairly primitive, played by untrained musicians who just wanted to make loud noise. Over the decades, adventurous bands changed the face of hardcore by fusing innovative experiments.

Fucked Up’s music has evolved since the band formed in 2001 in Toronto, Canada. Vocalist Damian Abraham, guitarists Mike Haliechuk and Josh Zucker, bassist Sandy Miranda, and drummer Jonah Falco have found various ways to shout gruff vocals, turn high the volume of the jangling guitars, and power-drive adrenaline into its music. To date, the band has released five studio albums and numerous EPs, singles, and compilations. Fucked Up’s most recent release is Do All Words Can Do, a collection of B-sides and rarities, released on March 25, yet originating from the era of David Comes to Life. Fucked Up next intends to release a four-song, 12″ vinyl EP, Oberon, on or around October 7.

Fucked Up’s current tour, postponed from earlier this year due to omicron, came to Brooklyn Made on July 16. The band is playing with one less founding member, as longtime guitarist Ben Cook left the band in 2021. Keyboardist Robin Hatch replaces him in live performances.

The tour is celebrating the 10th anniversary (actually the 11th) of the band’s third album, David Comes to Life, a 78-minute, 18-song, four-act hardcore opera. For those who can decipher the lyrics amid the din of loud, pounding music, the story line of David Comes to Life follows the dark psyche of a character named David in an industrial town in England in the late 1970s. The story studies love, loss and redemption, depression, guilt, and madness. The complexity of the plot thickens with unreliable narrators and their possible misdirection.

At Brooklyn Made, the musicians began with the first cut from the David Comes to Life album, an instrumental entitled “Let Her Rest,” until Damian Abraham came out to sing “Queen of Hearts.” Throughout the set, Abraham and the musicians hardly spoke to the audience, playing song after song seemingly without even exhaling. Dismiss any expectations of the conventional verse-bridge-chorus tradition; rather, the pummeling songs pivoted around a growling Abraham and monotonous high-energy riffs played incessantly by the musicians. Listeners who missed the backstory instead heard blistering hardcore punk fronted by a howling singer.

The set offered a breather when Falco left his drums to play guitar and duet vocally with Hatch on “Truth I Know” and “Life in Paper.” Abraham offered comic relief towards the end of the performance when he repeatedly crushed as many as four empty water bottles at a time and stuck them to his bald head. After playing the entire David Comes to Life album, Fucked Up left the stage and then returned for an encore, “Police,” a fan-favorite from 2003.

Fucked Up last released new music in 2018. The current tour, which ends in September, is a throwback experience, helping new fans identify where the band’s creativity landed a decade ago. By and large, the live show at Brooklyn Made faithfully recreated the David Comes to Life album, with limited fresh touches. Looking ahead, one can hope that the next tour will feature new compositions and showcase the band’s musical growth.