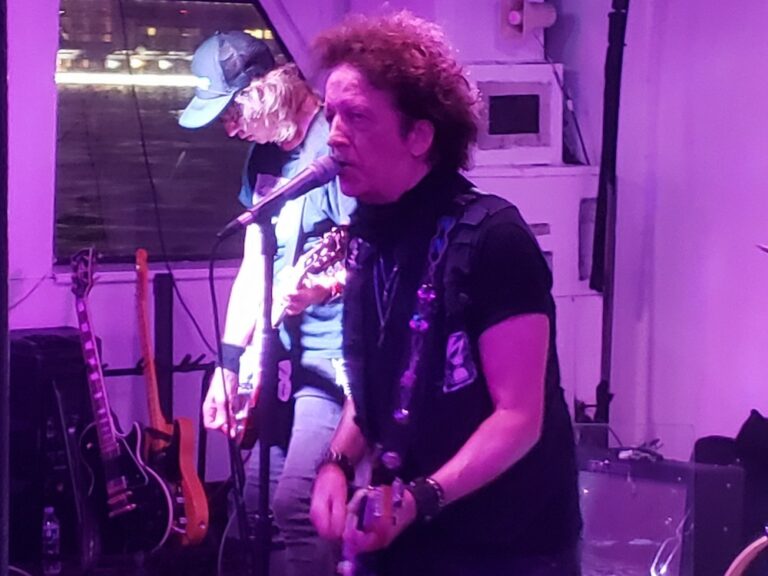 From a distance, in his youth in Buffalo, New York, Willie Nile grew enamored of the 1960s folk music renaissance in New York City’s Greenwich Village. By the time he relocated there in 1972, that scene had changed several times over. With a persistent dream in his head, an unwavering commitment in his heart, and an acoustic guitar firmly in his hands, he began performing in some of the same bars and coffeehouses, and even on the sidewalks and in the parks. In time, Willie Nile became the Prince of Bleecker Street.

Nile also lives with a rock and roll heart. Even from the commencement of his New York City journey, when he performed solo accompanied only by his acoustic guitar, his folk songs rocked. By the time he moved to playing bigger rooms in the mid to late 1980s, the volume and intensity of his music increased dramatically. In the 21st century, hardly a visage remains of the folkie. Nile is a powerhouse rocker.

Aboard the Harbor Lights, was the river rocking the boat or was it Nile? Probably both in equal measures. Accompanied by guitarist Jimi Bones, bassist Johnny Pisano, and drummer Jon Weber, Nile was a high voltage act. After a few songs, with his audience still seated, he extended his stage right up to the seats and even to the outside decks. Before long, the fans bounced out of their seats and the open area in front of the staging area was filled with dancing rockers.

Now a long time New Yorker, Nile sang numerous songs about the people and the culture of the city. His vocals were passionate. His lyrics periodically included references to the most broken and forgotten people among us. Nevertheless, when the seriousness of his lyrics hit deep, he subsequently raised the temperature by leading a singalong, as in “New York Is Rockin’,” in which he and the audience chanted the title about 80 times within four minutes. It was an ode to everyone aboard’s native or adopted home.

The two-hour river cruise sailed south along the Manhattan coastline from midtown, circled around the Statue of Liberty, and sailed back along the Brooklyn coastline. Just for the joy of playing music, Nile and his band performed an extra 15 minutes past curfew, playing even after the boat docked. Lady Liberty herself may have enjoyed the rocking.