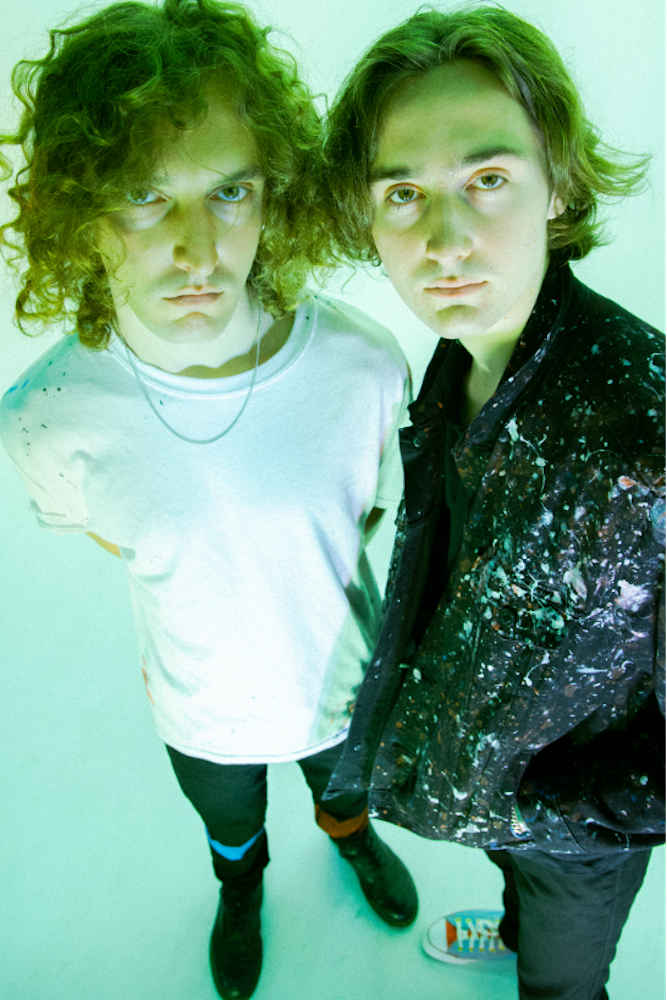 Brotherly love, in its finest form, can turn into something that sounds like you threw Jane’s Addiction, Ultra Q, Royal Blood, and Nebula into a NutriBullet in hopes of making a fuzz rock smoothie worthy of our attention. That is Taipei Houston, and at first sip, it is delicious. Myles and Layne Ulrich, SoCal brothers of Metallica drummer descent, make up this energetic new group. They are on-the-rise and euphoria-inducing from the get-go with this official single release – their very first after playing live shows together amid the pandemic (still coming off as seasoned-pros, though). One can’t help but feel electricity radiating off of them, bouncing off distortion pedals, and seeping into the crack and crevices of day-to-day life. However, that is a tell-tale sign that a rock band is on the right path… and then some. We’ve got our eye on that with goosebumps raised and mosh pit shoes ready until a tri-state Taipei concert comes our way. For now we’re just chatting with the duo about their debut.

Let’s start off slow, easy: Why was “As The Sun Sets” chosen to be your debut single? Did you know right off the bat that it would kick off your career at Taipei Houston?

“As The Sun Sets” was actually one of the first songs we wrote as a band…. We discovered a lot of the sounds we’ve ended up using for the live sound and other songs we’ve written when we wrote this song such as the fuzzy guitar tone, so it really just feels like a cornerstone of what this band is about at this present moment.

This song is your first release of official recorded music. Tell us and our readers a bit about that process – what was it like to put this together and subsequently put out into the great wide world of music and art?

This song has had a long journey from being written to the final master – we had a lot of fun in the studio trying to think about how to best capture the essence of the and how to make it sound as weird and unique as possible. We’re just so excited that this is out there now for everyone to hear and hopefully connect with in some way.

Many artistic sibling groups have admitted to moments of animosity – disagreements and stressors and such. So far, having released a single and begun playing shows around where you live, what have you learned about being bandmates as well as brothers?

Honestly, we are just the best of friends. We definitely do have disagreements but I always feel they are in the service of trying to make the music better or to improve our craft as artists. I’ve definitely learned that collaboration, although maybe challenging at some points, is a path to making better art. There are things that each of us can bring to the table that the other might be lacking.

On the topic of live shows, playing live and roaring in front of a crowd has made up the early moments of this band – and the lives you grew up in and around. What is the most rewarding and riveting aspects of performing and hosting concerts, especially in the rock and roll sphere?

The live experience as a whole is just such an insane rush. There are few things that are as exciting and rewarding as connecting with a crowd and putting your heart into a performance, and that’s what we try and do at every show. I think, even with only having a small amount of music out, there’s nothing cooler than when your performing and the crowd is visibly reacting to what your doing and having an experience your sharing with them. It’s very magical.

We can hear so many intricate layers of influences and talent within this one song. You have nineties guitar rock inspo mixed in with seventies experimentation and the best of what a DIY band sounds like today. If you had to categorize the bouncy, fuzzy electricity of your music, what would it be? Psych rock? Maybe even alternative metal?

What do you want people to know about this duo, Taipei Houston, coming off “As The Sun Sets” and going forward? What’s next? What’s in mind?

Definitely more coming very soon… stay tuned! I think we are just really excited to continue taking this project to the next level and exploring what is sonically in our future. We really love the sound we’ve fostered for this band so far and want to build upon it, but are also really excited to try new directions and keep people guessing, and that’s a huge discovery process for us that we are just excited to embark on and try to keep making as great of music as we can.

“AS THE SUN SETS,” THE DEBUT SINGLE FROM TAIPEI HOUSTON, IS OUT ON ALL STREAMING PLATFORMS!