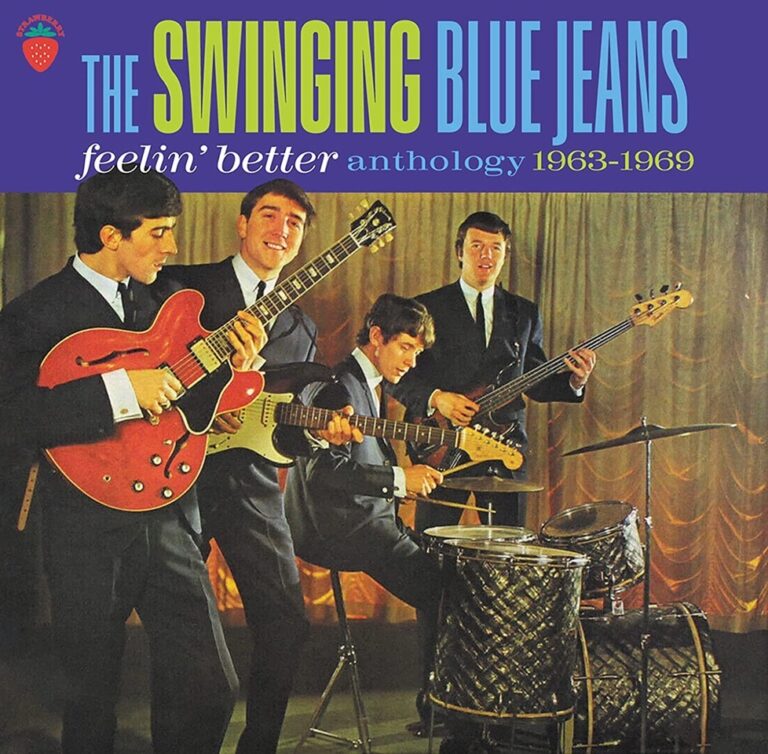 In the early 1960s, the Swinging Blue Jeans were in pretty much the same place as the Beatles – not just musically, but literally. They had a residency at Liverpool, England’s Cavern Club, where the Beatles, who also famously performed there, once appeared as their guests. Like the Fab Four, moreover, they honed their act at Hamburg, Germany’s Star Club and recorded German versions of a few of their songs. They also combined Merseybeat originals with covers of records by American acts they admired, including some of the same numbers the Beatles interpreted, such as Little Richard’s “Long Tall Sally” and Larry Williams’s “Dizzy Miss Lizzy.” They covered the Beatles’ “This Boy” and the Beatles, in turn, performed their “Hippy Hippy Shake.” Plus, their records often sound a lot like the early John, Paul, George, and Ringo (though at times they seem more redolent of such other British Invasion acts as the Searchers and the Dave Clark Five.)

So, why do the Beatles remain an international phenomenon more than half a century later while the Swinging Blue Jeans faded like an old pair of jeans? One reason is that the Beatles and manager Brian Epstein maintained a sharp focus on the American market, where they exploded. More importantly, the Fab Four grew artistically at an astonishing rate, moving, for example, from “I Want to Hold Your Hand” in 1963 to “Penny Lane” and “Strawberry Fields Forever” just three years later. By contrast, the Blue Jeans’ music in the late 60s seems little changed from what they offered a few years earlier when they scored their only U.S. hits, 1963’s aforementioned “Hippy Hippy Shake,” which made it to No. 24, and 1964’s “Good Golly Miss Molly,” a Little Richard cover that stalled at No. 44.

Nevertheless, the group has been the subject of several anthologies, a few of which are expansive enough to make you question the penultimate word in the title of 1993’s 26-track The Hippy Hippy Shake: The Definitive Collection. One such package is the new three-CD, 103-song Feelin’ Better—Anthology 1963–1969, which features extensive liner notes and embraces everything the Swinging Blue Jeans recorded between 1963 and 1969, including a rare Canadian LP, a single that originally appeared only in Scandinavia, German recordings, and both mono and stereo versions of some tracks.

Given the group’s limitations, you may wonder what justifies such a comprehensive collection. Well, for starters, the Blue Jeans enjoyed somewhat more success in England than they did on the other side of the pond (and this anthology issues from a British label). They had five hits in the U.K., and two of those – “Hippy Hippy Shake” and “You’re No Good” – approached the top of the charts. Also, while this outfit turned out to lack the growth potential of the Beatles, they did deliver mostly well-chosen material as well as consistently strong vocal work and the sort of enthusiasm that characterized the best Merseybeat acts. Arguably, none of their work is essential, but the vast majority of it is enjoyable.

Bo Diddley, Rocks. Bo Diddley, who died in 2008, made the American Top 40 pop charts only once (with “Say Man” in 1959), but he ranks among the most important figures in early rock. His complex, rhythmic guitar style influenced generations of performers, and his compositions (usually credited to Ellas McDaniel, his real name) have been covered by a long list of artists, including Bruce Springsteen, Paul McCartney, the Everly Brothers, Chris Isaak, the Rolling Stones, and Eric Clapton, to name a few.

This 28-track anthology is part of the Bear Family label’s Rocks series (which also embraces an excellent new Hank Ballard collection). It’s probably as good a single-disc career summary as you’ll find, and it includes many of Diddley’s best-known songs, among them “Road Runner,” “Bo Diddley,” “Who Do You Love,” and “Mona.”  However, there are some notable omissions, the most glaring of which is the classic “I’m a Man.” There’s not a bad track here, but you’ll get a fuller picture from 1990’s two-disc The Chess Box.

Andrew Duhon, Emerald Blue. It’s difficult to imagine that you could sing as compellingly as Andrew Duhon does on Emerald Blue without meaning every word. In songs that feature acoustic guitar and electric organ, this gorgeous and soulful fourth album finds the New Orleans native occupying a space somewhere between Van Morrison and John Prine and offering well-articulated commentary on America, personal relationships, the human condition, and his own career.

Duhon references Prine in “As Good as It Gets,” where he talks about performing the late artist’s songs “in the corner of a bar with an empty tip jar with nobody singing along,” then recalls playing one of his own songs for Prine and saying, “Johnny, there’s got to be something out there for me.” And he adds: “All I want to do in this life is stretch out, see how far this old boy can go.” He’s certainly stretching here, and if enough people pay attention, he’s likely to go far indeed.

Monica Taylor, Trains, Rivers & Trails. Oklahoma-based singer and acoustic guitarist Monica Taylor shines on her third solo album, her first since 2009. (She has also released six records as part of a duo and a trio.) The 11-track folk/country CD features originals and well-chosen covers and a backup crew that adds mandolin, dobro, banjo, piano, accordion, and bass.

Taylor applies her unaffected vocals to two songs about trains, a number about saying goodbye, a sprightly ode to Louisiana, and a song called “Salty Tears,” which addresses this country’s mistreatment of her Native American ancestors in the early 1800s. She also winningly interprets the Byrds’ “Ballad of Easy Rider” and John Hartford’s “Gentle on My Mind” and offers a fine version of “Minor Key,” which melds a Woody Guthrie lyric to music by Billy Bragg and Wilco. Sharing lead vocals with her on that tune and providing keyboard work throughout is singer/songwriter and fellow Oklahoman John Fulbright, who happens to hail from Guthrie’s hometown.

Fantastic Cat, The Very Best of Fantastic Cat. It takes a sense of humor to include the words “very best of” in your debut album’s title. Fortunately, these guys – who all contribute songs to the album – also possess enough talent to suggest that a real anthology of high points may not be too many years away.

The group consists of Anthony D’Amato, Don DiLego, and Brian Dunne, all of whom have recorded solo albums, and Mike Montali, lead singer of the rock band Hollis Brown. On tracks like “Wild & Free” and “Fiona,” they sound a bit like the Jayhawks; elsewhere, such as on the well-hooked “Nobody’s Coming to Get You” and “Lakewood,” there’s less of an Americana vibe and more echo of 70s rock.

Megan Bee, Cottonwood. Megan Bee’s sharply honed lyrics and amiable vocals are centerstage on this minimally produced latest album, whose 14 tracks are rooted in acoustic folk but include enough fiddle, banjo, and lap steel to convey a bit of country flavor.

The Ohio-based artist’s self-penned, frequently first-person tales cover wide terrain. In “Rolls Away,” a man escapes his troubles in a weekly night of bowling while in “Ecstasy,” Bee writes about someone taking that drug as well as LSD and morphine. “Never Known” is about an unborn child. And then there’s “Use to Be,” where she sings, “I’m trying to be quiet, I’m trying to listen…listen for a melody, listen for the right words.” She finds them on Cottonwood.