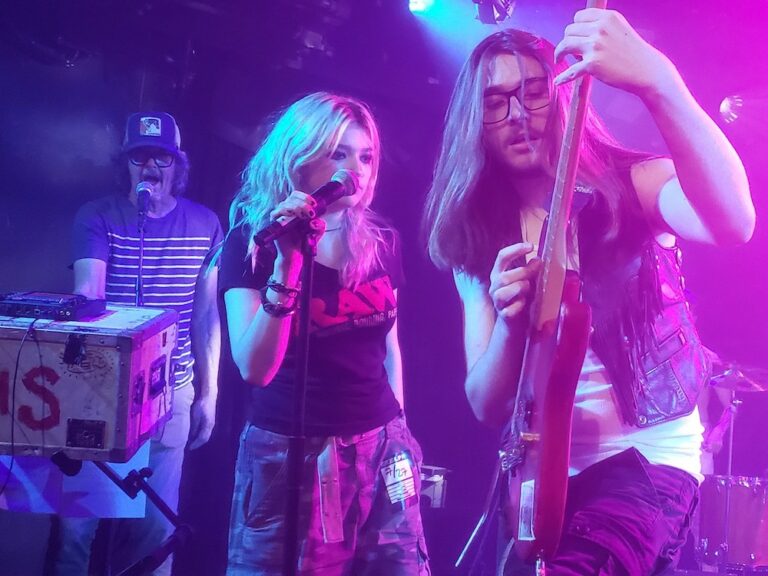 Gibby Haynes, born and raised in Dallas, Texas, co-founded the punk band Butthole Surfers with Paul Leary in 1981 in San Antonio. The Butthole Surfers quickly became known for shock value during concerts. Haynes often fired a shotgun above the audience. He invited his girlfriend to dance naked onstage. Several times, he wore both an American flag as a skirt and a torpedo bra. A list of his stage antics would be endless. Meanwhile, the music was inventive punk mixed with psychedelia and noise. The Butthole Surfers achieved little commercial success until 1996’s Electriclarryland. The band appears to be on hiatus since at least 2016.

Now 64 years old, the Gibby Haynes onstage at (le) Poisson Rouge no longer resembled a shock rocker. He performed with students from the Paul Green Rock Academy, a music school in Norwalk, Connecticut, with which Haynes has collaborated since 2007. The audience at LPR seemed evenly divided between punk fans and the family and friends of the youthful musicians.

The opening set consisted of varying configurations of talented students rocking on cover songs, with several of the youth switching instruments through the course of the program. The adult conductor waved a drumstick from the audience as he directed the youths’ performances. Indeed, his students were well rehearsed and performed energetically like it was the biggest day of their lives.

After intermission, Haynes joined the youth on stage. The main set included Butthole Surfers songs, yet the program remained mostly a showcase for the youth, with Haynes singing from the side of the stage. Compared to the students, Haynes’ musical contributions were comparatively minimal.

The youth stole the show. In the end, this was not truly a Gibby Haynes concert, and was not anywhere near a Butthole Surfers event. Those shows will have to wait for another day.