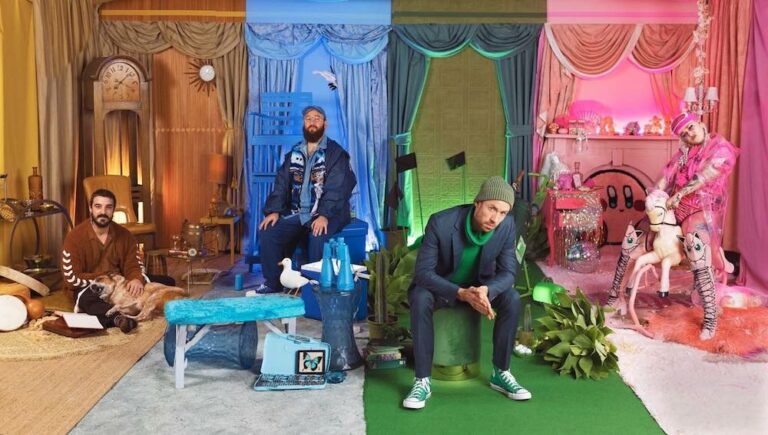 Their a band with a lot under their belt – musically, influentially, eventfully – and we sat down to talk about it all.

Melbourne’s Hiatus Kaiyote are pretty extraordinary in how they craft their style of music. A psychedelic blend of soul, R&B, jazz, trip hop, and funk resonates in the songs they create. In doing so, the quartet of singer & guitarist Nai Palm, bassist Paul Bender, keyboardist Simon Marvin, and drummer Perrin Moss exhibit a cohesiveness that at times can be abstract while also riding a groove. People will be able to witness this when the band takes the stage on August 11 at the Brooklyn Mirage located within the Avant Gardener events venue. Local alternative R&B artist Nick Hakim will be starting off the show.

Marvin and I had a talk ahead of the show about the band’s latest album Mood Valiant, a remix version of the album that came out recently, having an insane first gig over 10 years ago, and plans for new music in 2023.

Hiatus Kaiyote’s latest album Mood Valiant that came out last year is very personal in how Nai Palm composed many of the songs while going under treatment for breast cancer and noting how this reality affected her perspective in life. How did this affect the recording process and what was the experience like making the album as a whole with this being the theme behind it?

The recording process was over a number of years so that all kind of happened towards the end of it, we kind of did Nai’s vocals at the end and Nai was doing that by herself so it didn’t really have that much to do with the rest of us. The process that we went through ws really like three or four major recording studio dates that we did around Australia and one in Brazil. It was sort of in between tours, we go into the studio and do a week at a particular spot while either focusing on designated tracks we had ready or just jamming and writing. This record was a bit different for us compared to the last two that we did because with the previous ones we had a lot of material. For Use Your Weapon, we had the record already spanned out because we were playing a lot of live shows and we didn’t really have much time to record so pretty much all of it was already written.

With Mood Valiant, there were two tracks on the record that we’d been playing for a couple years live so the bulk of it is new stuff for us. It was a really nice journey.

A few weeks ago the band released a remix of the album titled Mood Variant which enlists DJ Khalil, Stro Eliot, Georgia Anne Muldrow, and many others to do different versions of the album’s tracks. Who had the idea for the remix album and how did you go about getting these other artists involved? Did you reach out to them personally yourselves or did they connect with you?

I think it was a bit of all the above, really. We brought it up, we thought about who would be really good to do the remixes and then our management went to work. We have a manager in the United States and another manager in Australia who were able to make the connections. We’ve established these relationships with these artists for over 10 years now so the connections that we made with them made it pretty easy for us to get them involved. Everyone was pretty excited to do it.

Going back to 2011 when you were starting out, Hiatus Kaiyote played their first show in a very unique way at a Bohemian Masquerade Ball among sword swallowers, fire twirlers, and gypsy deathcore bands. To reflect, what are your thoughts on this experience? It must have been a pretty wild time, not a lot of bands start out this way.

It was pretty wild and the Melbourne music scene is crazy, there’s a lot of stuff happening all the time. Especially back then, it was just kind of like another show. It was pretty amazing though, at the time I was working in a lot of different bands so I was playing shows most nights so for me it was just another show. Looking back, I guess it was a pretty insane gig and that show is kind of the epitome of our manager in Australia. He’s a crazy dude and that was at a time when he was really focusing on putting on shows, so that’s what he was really honing in on.

He ended up taking a bunch of that crew on the road in a bus around Australia doing a tour of that event. It was a pretty insane first gig but that’s just Hiatus Kaiyote, everything that we do is pretty insane.

I totally agree. Since that show, in which ways do you think Hiatus Kaiyote has grown? Either musically, artistically, or even business wise?

Artistically, it’s a collaboration. It’s the one thing you gotta remember, there’s four people working on this sound so the more that everyone grows, the more the band grows. I think it’s really difficult to think about where inspiration comes from and how things grow, but it’s just a natural thing for us in the sense that there’s no sort of concept about genre with this project. It’s just very emotional driven music, ideas and creativity, everyone’s pretty open to any kind of sound as long as it’s good then we’re off on the journey. Business wise, the band has grown pretty intensively.

It’s crazy to have that many people involved with your band. Are there any plans for new music at some point next year or do you just plan on touring in support of Mood Valiant for the time being?

I think there are plans for a new record next year but we’re not ones who stick to plans that work out. It always seems to take longer than we expect, but there are plans to release another record next year. We’ve already recorded a bunch of music for it, there’s just a few more things to do along with getting back on the road. This is our first big tour that we’re embarking on since the pandemic so fingers crossed that things keep getting better and we can continue to be out on the road playing shows, that’s the one thing we all miss the most. We love performing to people all over the world, it’s a big difference in America compared to Australia.

Australia is a difficult place to tour for us, there’s only a handful of major cities. Whereas in America we can do a pretty extensive run.

FOR TICKETS TO SEE HIATUS KAIYOTE, AND KEEP UP WITH WHAT THEY’RE DOING, CHECK OUT THEIR WEBSITE!