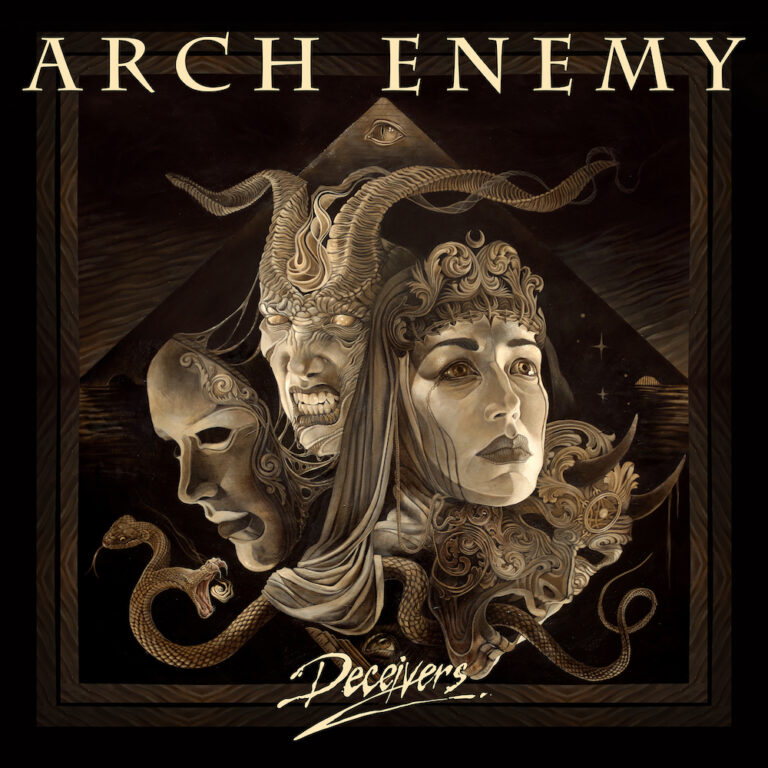 It’s not necessarily an album out of left field, but it is an album filled with surprises that even longtime fans will be taken aback by (in the best way).

Arch Enemy has always been a household name for any metalhead. Their new album Deceivers proves their existence as the best in the metal scene. This is not a band that has any intention of fading away. They are always putting their best foot forward with every release. This album may be the band’s magnum opus. It has everything fans have come to expect from the band but intensified. Arch Enemy is heavier, catchier, deeper, darker, and bigger than ever before.

The most noticeable change in the band’s tone is how astoundingly aggressive they sound. As a metal band, listeners expect a certain level of heavy with every release. However, no one is expecting this. “Deceiver, Deceiver” was one of the most blistering tracks the band has ever released and there are even more hidden gems across the album’s tracklist. “The Watcher” left me floored with its ferocity and overall flow. It’s a track that starts as heavy as possible and does not lighten up. “House of Mirrors” and “Exiled from Earth” have brutal and unheard of screams as well as vicious drums. This album is pummeling full force and creates the most memorable beat down riffs I’ve ever heard. Even when the album is more melodic it still has an overwhelming sense of outrage. If you’re a fan of heavy metal, this album will blow your mind.

Lyrically the album defies expectations yet again. A common flaw with the metal genre is the lackluster or formulaic lyrics. Such is not the case with Arch Enemy. The lyrics are ominous and dark, perfectly coinciding with the album’s sound. Every word that is sung seems to add to the album’s tones beautifully. The band discusses the end of the world, the afterlife, human nature, and living through emotional agony. Deceivers really is an album with a complete emotional journey.

Alissa White-Gluz also deserves a huge amount of recognition as a vocalist. She sounds stunning on this album. From the opening track, the audience knows exactly what they’re getting themselves into. When she screams, it’s always deep and rich. Her screams have a darker tone that almost feel like the devil itself. Her clean singing is just as incredible. She does it very sparingly across the album. Which means that when she does, it has that much more of an impact. An example of this is the clean part on the bridge of “Handshake With Hell” right before the explosion that is the guitar symphony. Her vocals are never competing with the instrumentation. When it’s time to get heavy and shred guitar solos, the guitar is the spotlight. This whole album is so symbiotic. Alissa also can deliver such villainous screams at a fast pace too. There are moments throughout the album her flow is just as impressive as her tone and notes. Vocally, this album delivers everything a fan of heavy music wants.

Another aspect to mention is the songwriting of the record. The hooks are infectious beyond belief. Tracks like “Sunset Over The Empire” and “Spreading Black Wings” deliver guitar rhythms that are bound to get stuck in your head for weeks. This is a heavy (borderline deathcore) album that has the catchiest guitar riffs the genre has ever seen.

The choruses on this album are also extremely well constructed. Every time the chorus arrives on a track, it’s impossible to miss. Songs that left me stunned when the chorus hit were “Poisoned Arrow” and “One Last Time.” The choruses on this LP are extremely full sounding. They belong in an area with mosh pits sprawled in front of them. Every chorus is earned and always amplifies the atmosphere of the track.

Overall, with many positives and no real glaring negatives, this was a fantastic release from an already extremely impressive band. The tones are heavier and more sinister than the band has ever been. This takes the heavy metal genre to a whole new level. The choruses are more catchy and vibrant. You will undoubtedly be singing them in your car for months on end. The vocals and lyrics sound incredible. Also, the songwriting is exceptional. Deceivers album shines even brighter in its deeper cuts. This is an album that is sure to make year end lists. It’s the band firing on all cylinders and giving it their all. Arch Enemy are not just another metal band. They are the metal band, and if you disagree, give this record a spin.

DECEIVERS, THE NEW ALBUM FROM ARCH ENEMY, IS OUT THIS FRIDAY, AUGUST 12, WHEREVER YOU LISTEN TO MUSIC! PRE-SAVE THE RECORD HERE!