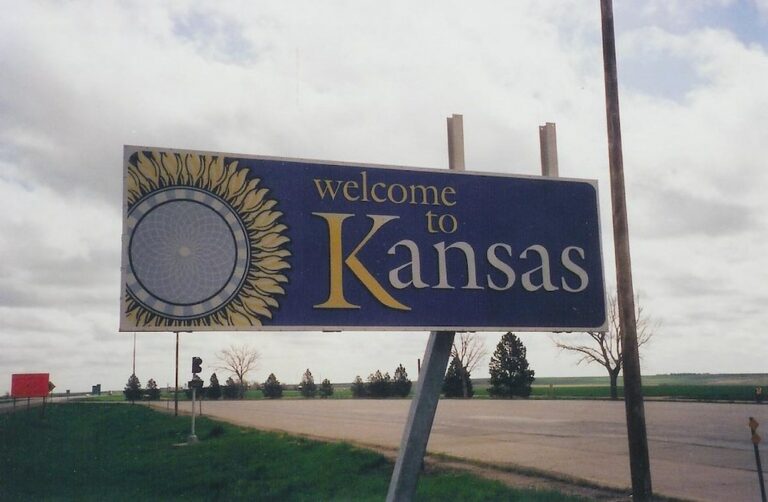 "Welcome to Kansas near Goodland, Kansas" by Ken Lund is licensed under CC BY-SA 2.0. To view a copy of this license, visit https://creativecommons.org/licenses/by-sa/2.0/?ref=openverse.

I want to first point out that putting the personal sovereignty of a citizen’s internal organs on the ballot in any way shape or form in places not called China or Russia is beyond comprehension. It is flat-out icky and so incredibly unconstitutional it is hard to believe I am writing about it. But that is where we are now thanks to Donald Trump and the Republican Party’s ramming of underqualified radical Supreme Court picks that had one agenda – overturn Roe v Wade and enslave the wombs of women across America. Since I am not a crybaby like most Republicans, and frankly many Democrats, I just deal with the circumstances and get on with what we’re dealing with. Revolution, and the revolution was televised this past week – in Kansas of all places.

You know, one of the box-shaped, fly-over spaces somewhere along the fruited plain where Dorothy came from in a book written by a New Yorker by way of Chicago and made famous in Hollywood, U.S.A.? The Deep-Red state that voted overwhelmingly for the aforementioned Trump twice? That Kansas.

Now, if you are regular reader of this mess here, you know I’ve been on this wall throughout the crucial month of June when the Republican Party would officially become a fascist regime after the former shit-for-brains domestic terrorist president’s justices summarily overturned what they deemed “settled law,” forcing 51% of the populace into bondage to government control and made abortion illegal – fines, jail, harassment. I promised a follow-up routinely, and most importantly, a political temperature-check on the fallout of this generation’s most significant socio-political event.

And the very essence of that fight played out this week in the most unlikeliest of places.

Kansas is as a Republican controlled state as can be found north of the Mason-Dixon line – it’s state legislature, senate, congressional delegation, and both of its senators are all GOP controlled. This electorate went to the polls during the middle of summer (Ok, so there are no beaches in Kansas, but still) in a lousy little primary (no one really votes in primaries except shut-ins you might glimpse at goofy things like rallies), to obliterate the Republican-concocted proposal to completely ban abortions even for rape and incest by a tally of 59 to 41%. This, by the way, equals what is the nationally polled average of ALL voters – Republican, Democrat, and Independent – 60% in favor of abortion rights or Pro-Choice or really Pro-Freedom and Pro-America. To use a rarely uttered political term: Oof.

That’s not all, kids. Digging deeper, Kansas released new voter-registration numbers around the time of the primary. Before the June 24 take-down of Roe v Wade, which formally protected the rights of women to control their own bodies, new voters, usually dominated by Republicans (averaged around 19 points) was slashed to an eight-point advantage – 70% of these newly registered voters were women. They also apparently have an agenda, and that is to expunge this draconian shit from their state.

And they did. At the ballot box. Overwhelmingly.

Digging even deeper into this keening political siren reveals that nearly one-million votes were tallied, doubling the total of the last competitive primary season in 2018. That is staggering, determined, energized turnout on any scale of measurement. To compare: The last two general presidential election cycles drew 1.2 million. This vote was national. This was major. This was a voice, a very powerful and meaningful voice coming out of the American hinterland.

Oooh, another good one, courtesy of our pal, political stat-guru, Steve Kornacki: When Democratic Governor Laura Kelly won the position in 2018, she carried eight counties, and Biden, who lost the state by 15 points, carried five. The “No” vote on the expunging of abortion rights in Kansas carried 19 counties!

So, what does this mean for this fall’s mid-terms, which looks bleak for Democrats in the House – record inflation, vacillating gas prices, jumpy stock market, and shitty presidential approval numbers? Well, the Senate is now favored to go to the Democrats due to some weird candidates in places like Georgia, Arizona, and Pennsylvania… and it’s the Senate that decides the Court. This is finally not lost on non-Republican voters, especially suburban women who fled the Republican Party like the plague it had become under Donald Trump.

However, in the last two years this growing and influential voting block has slowly shifted back to the GOP on the vaguely made-up issue of “Parents Rights,” a goofy culture-war ploy used by hucksters like Florida Governor Ron DeSantis, who is excellent at polarizing the electorate to his advantage. This has been a key ingredient in putting the squeeze on the MAGA crowd currently, which will be a sticky situation should Trump, who doesn’t give a shit about party politics or America, his children, your children, or anything not named Donald Trump, get into the fight and begin to paint DeSantis with the same brush as Lyin’ Ted and Little Marco and his other fifth-grade-level bullshit.

I digress. What the Kansas vote underlined is that in these suburban counties, like Johnson County in Kansas, of which nationally doomed Trump in 2020 in Red and Blue states, the average percentage of the statewide vote is 20-25%. This past week – in fucking Kansas! – it nearly topped off at 30%. Those are the kind of numbers come November that could greatly lessen a Red Wave. Not sure if it will, but what Kansas tells us is that it would have been a whole lot worse before the historic, damaging, and wholly unpopular Dobbs decision that started this fire.

Republicans can tame this thing by simply not making it an issue and put women’s private healthcare on the ballot in all 50 states. This is what it has come to; and may come to with marriage-equality, contraception, and other rights the conservative-packed Supreme Court is coming for.

This is what Fucking Kansas! told us this week.

James Campion is the Managing Editor of The Reality Check News & Information Desk and the author of “Deep Tank Jersey,” “Fear No Art,” “Trailing Jesus,” “Midnight For Cinderella,” “Y”,” “Shout It Out Loud – The Story of KISS’s Destroyer and the Making of an American Icon,” Accidently Like a Martyr – The Tortured Art of Warren Zevon,” and most recently, 2022’s “Take a Sad Song… The Emotional Currency of “Hey Jude.”