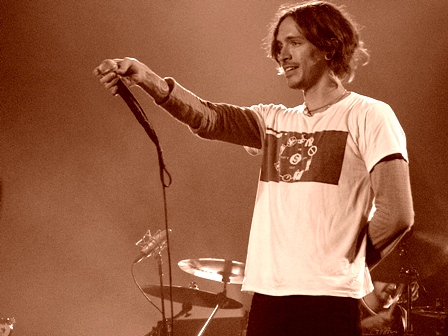 "File:Brandon Boyd of Incubus live 2004.jpg" by Jon Iraundegui (aterpeirun) is licensed under CC BY 2.0. To view a copy of this license, visit https://creativecommons.org/licenses/by/2.0/?ref=openverse.

The sultry New Jersey evening began with The Aquadolls who did yeomen’s work warming up the early arriving crowd. Although the female punk trio’s treated the audience to their most popular songs, including as “Take Me Away” and “Beachy,” the highlight of their short set was a reverent cover of The Go-Gos’ classic “Vacation.”

The now near-capacity crowd was a mix of all ages. It was nice to see parents and their teens sharing in the experience and appreciation for bands who first came to prominence more than two decades ago.

As the sun began to set on the Holmdel, New Jersey amphitheater, Sublime with Rome took the stage. Although it would be easy to write off the California ska band’s latest lineup as a glorified covers band, it would not be fair. No one will ever replace original frontman and chief songwriter Brad Nowell, who succumbed to a drug overdose in 1996, but Rome turned out to be a formidable great frontman who commanded the audience’s attention throughout.

Aside from a few tracks from Sublime with Rome’s recent recordings the night was a celebration of Nowell’s legacy with nearly all of the band’s classics, including “Doin’ Time,” “Wrong Way,” and “Badfish.” As guitarist Cheese joined the band onstage for the regular set ender “What I Got,” the band’s Rottweiler pranced the stage, playing fetch with a nearby roadie. While the crowd cooed and awed, one could only think about how painful the loud noise must have felt to this beautiful puppy. The band quickly returned to the stage for the obvious encore, a sing-a-long to Sublime’s biggest hit “Santeria” before they ended the night without playing their other hit “Date Rape.” Was the reason the song’s lyrical content?

Dire Strait’s “Money for Nothing” provided the introduction to Incubus’ set. As they took the stage to monstrous applause, they launched into “Nice to Know You.” That was followed by 18 more songs, which mixed major hits like “Pardon Me” with slightly deeper cuts such as the band’s recent single “Karma, Come Back.” Perhaps the biggest surprise of the night was a cover of Lenny Kravitz’s “It Ain’t Over “Til It’s Over,” which the band performed with such perfection it sounded as if they originally composed and recorded the song.

No longer the brash 20-somethings that dominated rock radio and the pop charts at the start of the new millennium, Incubus’ members appear to be more mature. Frontman and recent Aquarian cover star Brandon Boyd may sport a smattering of gray hair, but unlike a few of his peers (who shall remain nameless), he has lost none of his powerful voice or stage presence that first made him a star during the late nineties. The last third of their set was a further mix of hits and deeper cuts before the now sweaty band returned to the stage for their encore, their biggest hit, “Drive.” After the band took their final bows and departed the stage, the audience slowly filed out of the venue and ventured into the night, drained perhaps, but thoroughly satisfied.