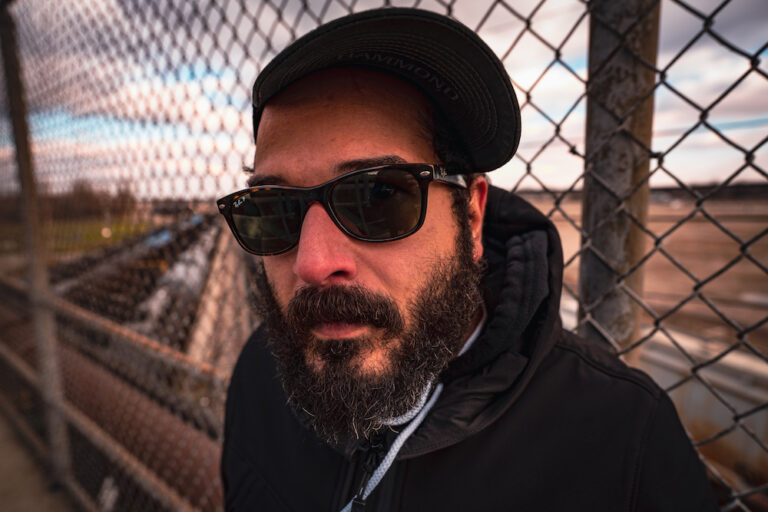 It’s new, expansive, and filled to the brim with lifelong influences. It, if you’re wondering, is the latest series of releases from an Ohio musician and friend of The Aquarian.

Trophy Girls is a subsection of the band Hit The Lights and yet another well-rounded project from the multi-facted, über-creative Omar Zehery. With that in mind, the sights and sounds of this new release are familiar sounding rock and roll, but wholly originally and edgy in the way it connects a narrative, threading hardcore riffs into storytelling across multiple songs (forthcoming on an EP). So far the world has been offered up “Trouble” as Hit The Lights gets ready for its own big return and Zehery tinkers with wild solo ventures. The Aquarian got to chatting about all of that in this humble, excitement-baring interview.

How has summer been treating you, whether it be personally, professionally, creatively? Between heat waves, social tension, pandemic stressors, and more… well, you would think we’re used to that, but we’re still looking for escapes and music is just that – especially the kind with such fervor behind it, like yours.

Summer ’22 has been a pretty bitchin’ one so far! I recently moved my recording studio, Legacy Sounds, from an abandoned office space into a building shared with other creative-centered businesses. All of the business owners are pals, and we all put on cool events together here in my hometown of Lima, Ohio. We love putting on these shows – definitely stoked to be building a sense of community and culture with like-minded people to keep our town fresh and thriving.

I’ve been lucky to be staying busy recording, producing and preparing to release a number of upcoming projects on our record label, Rustgaze Records. It’s been great working with some really talented folks like Jasmine Goare, D L Burdon, and Kevin Ashba. Also, reconnecting and working on some new jams with some old buds has made this summer one for the books. Between that, releasing these Trophy Girls songs, and celebrating my upcoming one-year wedding anniversary with my wife, it’s been enough to almost forget that the world is turning to ash!

Tell us a bit about the order of single releases, “Trouble” first and “Whisperin’.” second. What was the thought process behind that and can you tell us anything about where these two tracks stand within the hopeful, eventual larger package?

When we were thinking of what music videos we could make for the tunes on the EP, concepts for “Trouble,” “Whisperin’,” and “These Kids” were the first ones that jumped out at us. I wouldn’t necessarily say that conscious decisions were made on the order of the roll out of the tunes beyond that. I’m stoked “Trouble” is the first foot forward in introducing the world to Trophy Girls, mainly because I’m not featured too heavily in the video! I never really intended to be a front man and have definitely been battling some feelings of imposter syndrome so the concept of being completely masked up (outside a couple of cameo shots) in the first video being released was very appealing… totally get why The Slipknots do it.

Each of the five Trophy Girls songs we’re releasing has its own individual spark that I’m proud of, but collectively they also have a cohesiveness that glues them together, which makes it difficult to pick and choose what goes out as a single. As a “new” artist I’m trying not to worry about how others will react and just trusting the process. I have faith that people will hang with and enjoy the music as a unit when the full EP drops.

Why was now a good time to start piecing together a solo project as Hit The Lights also works on new music?

I actually started writing the Trophy Girls songs years ago between Hit The Lights tours. The music originally started as new ideas for HTL, but as they started coming together I realized that it would be better suited as its own thing. Over the next couple years, I developed the songs here and there when I had time. After demoing a couple of ideas with Greg Altman and Will Noon in Philadelphia, I recorded the tunes in Toronto that would make up the Beginner’s Luck EP with producer Sam Guaiana after we met while our bands toured together in Japan. Not only was Sam a sweet dude, awesome drummer, and great producer, but he had a way of translating my blown out GarageBand demos into songs with depth and clarity without losing the aggression and energy from which they stemmed from. Sam and his family opened their home to me where we hung for a week, watched our favorite Simpsons episodes and recorded these tunes – still one of my fondest recording experiences to date.

Shortly after that, I took a step back from touring with HTL to make up for some lost time with my family and to start focusing on production, recording, and co-writing. I was excited to work on music that wasn’t my own and explore different genres. When I reestablished myself in my hometown, I took a job bartending and started booking area acts which got me reacquainted with music in and around the community. There were some people who were also coming up with genuine, original music that moved me and they didn’t know what to do with it. That’s when it all clicked for me. I started Legacy Sounds Studio to provide creative development support for local musicians in hopes of keeping them in an area that badly needs to retain young, creative energy and culture. The studio work we were doing with these artists eventually led way to the formation of Rustgaze Records to release the music and promote the artists we had been developing in the studio.

It was through talking with my good friend and partner at our label, David Entinghe, that he asked if I personally had any music that we could release in addition to the artists we were working with. I showed him the Trophy Girls tunes that had been sitting on a hard drive for a few years at that point, and he was like, “Why hasn’t this been released yet?!” That was the real catalyst that got the project rolling. Around the same time, my friend Gary, who I knew from the UK, hit me up and said that he was working with Jason Butler of Fever 333 on a label, 333 Wreckords, and asked if I had any music to share. Gary and Jason explained their mission-based principles which we immediately related to because of the mission-driven foundation of our own label. I shared these songs with him and that’s how this project became a co-release between our two labels.

As for picking back up with Hit The Lights, we had basically grown up doing the band and I feel like everyone was ready to try some different things. It took stepping away from it for a bit to realize how special what we had really was. Nick Thompson (HTL vocalist) and I have been passing new ideas back and forth and it’s exciting to think about coming back together with a few more years of experience and hindsight to work on new Hit The Lights music. I legit get butterflies thinking about getting back in the room and making a ruckus with dudes that have meant the world to me.

What is Trophy Girls? The name of this edgy, gritty, yet somehow polished project can have quite a few connotations. How did you choose it for this?

The name came from lyrics from a sick breakdown on a song by a band called the Suicide File that I heard in 2005. I thought it had a cool ring to it so I added it to a list I kept of song titles, band names and lyrics I had been collecting for years and knew eventually I’d use it for something. When I was looking for a name for the project, I found that list and felt it suited the music. There’s something about the juxtaposition between the name and the music that felt right to me. It seems a few bands with “trophy” in their title have came and went since then but I decided to stick to my gut and keep the name.

There is an effortless sort of energy to your music and especially when it has true punk qualities to it. Who are the punk artists, bands, and eras that shaped you, and in turn, Trophy Girls?

First off, wow! This is the first interview I’ve done for this project and hearing you say that gave me the tingles, so thank you for the kind words!

I grew up loving all sorts of different music, but didn’t feel a need to write or perform until I discovered punk rock. Zines, compilation CD’s from different record labels, as well as the thank you’s in the liner notes of records I’d get, would send me down the rabbit hole to discover new music. 120 Minutes and Alternative Nation were great back when MTV actually played music! Hot take, I know… I was also lucky to have two older sisters that would introduce me to good music on the down low since I was still a kid in elementary school. Basically, it was like, “If mom and dad find this, you didn’t get it from us, ya dig?” But once that train got rolling, it felt like it was impossible to stop. When [Green Day’s] Dookie came out and my sister knew I was into it, she gave me a cassette of 24 Hour Revenge Therapy by Jawbreaker and was like, “This is like that, but better!” I still have tapes of Black Flag, the Pixies, Superchunk, and A Tribe Called Quest that my sisters made me, always on dubbed cassettes so there’d be no evidence of questionable liner notes and album art for my parents to find and freak out about. Sprinkle in some Criteria, Weezer, and Foo Fighters and that makes up the building blocks of inspiration for Trophy Girls.

Nowadays I’m really stoked on what bands like PUP, Joyce Manor, and Oxymorrons have been and are doing. Also, Shitty Neighbors. Everyone should be listening to Shitty Neighbors!

We’ve been covering you and Hit The Lights for some time now. What can you share with our readers in regard to how the art differs from each other or what you can expect from TG over HTL, things like that?

I know! The Aquarian has been covering us for years and we appreciate the hell out of you for it. I had a blast going back and reading some of the past interviews we’ve done together and was flooded by memories of what we were going through at the time. To answer your question; because HTL is a band comprised of four different songwriters, each song would go through a pretty rigorous process because we all value one another’s input. It’s that process that’s shaped the sound of HTL over the years. Since Trophy Girls is basically a solo project (for now), I’m able to wear a lot of my influences on my sleeve and take songs in whatever wacky directions I choose. Also, the decision- making process is a lot looser and can move quicker which allows it to have a rawer approach to music making and that has always kept music exciting for me.