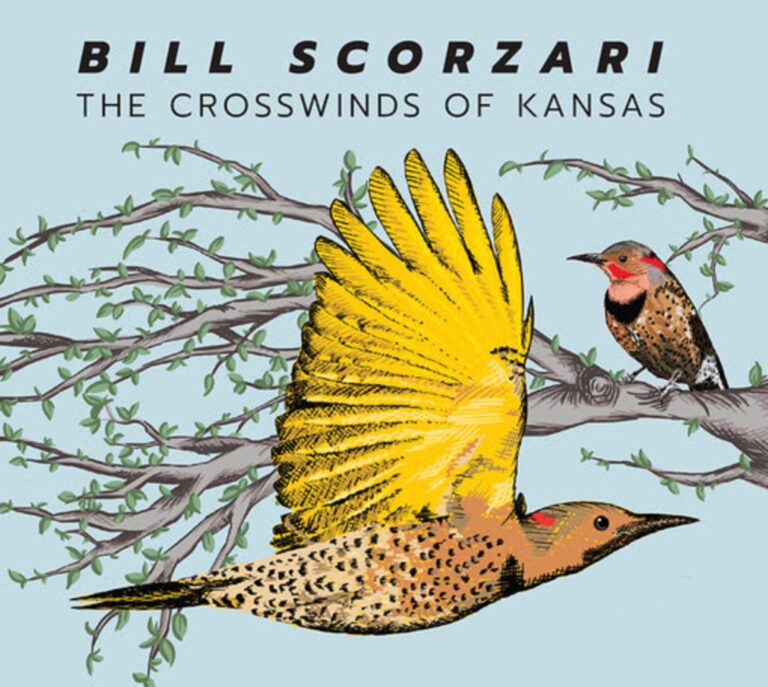 Bill Scorzari, The Crosswinds of Kansas. This fourth all-originals collection from New York–based singer, songwriter, and multi-instrumentalist Bill Scorzari, which the ubiquitous Neilson Hubbard co-produced, may be his best yet. That’s saying plenty given the excellence of such earlier efforts as 2017’s Through These Waves and 2019’s Now I’m Free.

Scorzari’s raspy vocals – think Dave Van Ronk with a touch of Steve Earle – add weight to his wise, poetic lyrics. They also contrast beautifully with the album’s frequently sweet-sounding music, which features a variety of guitars and such other instruments as dobro, cello, piano, fiddle, banjo, upright bass, mandolin, and percussion, not to mention Native American flutes and a Tibetan singing bowl bell. Songs like “All Behind Me Now” and “Inside My Heart” will have you hanging on every word and wondering why Scorzari isn’t famous yet.

Kenny Roby, Kenny Roby. Singer/songwriter Kenny Roby, the former frontman for alt-country’s 6 String Drag, has reportedly suffered difficult times in recent years, including a failed marriage, alcohol problems, and the deaths of family members and close friends – among them, Neal Casal, who took his own life just before he was to have produced Roby’s last CD.

On this self-titled new record, though, he seems determined to start fresh. Perhaps that’s why he moved in 2019 from Raleigh, North Carolina, to Woodstock, New York – and why he sings at one point on this album that “once I cross that Virginia line, I’m gonna leave it behind.” He also opens the set by proclaiming, “I think my poor heart’s a growin’, it will bloom again” and ends it with a song in which he declares, “I’m workin’ on a new house, that’s what it’s all about.”

Roby conveys tenderness and compassion throughout the intimate and understated collection, which features his guitar and Mellotron work and mixes wistfulness with upbeat imagery and rhythms. A backup band adds guitars, keyboards, cello, and percussion, and several tracks also feature the multitalented Dori Freeman as well as two of the artist’s Woodstock neighbors: vocalist Amy Helm (daughter of the Band’s Levon Helm and singer Libby Titus) and the great John Sebastian, who plays harmonica.

Greg Loiacono, Giving It All Away. Singer and guitarist Greg Loiacono, who is known for his long tenure with West Coast rockers the Mother Hips, evokes sixties soul/pop on this excellent third full-length solo release. Supported by a drummer, an organist, and a bassist as well as by horns and backup singers, he applies his fine falsetto to a radio-friendly collection of songs about love won and lost.

The performances, which sometimes recall Boz Scaggs, include six numbers that Loiacono wrote and two that he co-authored, among them Mother Hips’s “Del Mar Station.” Also here are versions of Genesis’s “That’s All” and Barbara Lynn’s self-penned 1962 Top 10 hit, “You’ll Lose a Good Thing.” That latter song has been covered many times, most notably by Freddy Fender, but Loiacono’s soul-soaked retro version is as good as any you’ll hear.

Will Stewart, Slow Life. Electric and acoustic guitars – all played by the Birmingham, Alabama–based Will Stewart – are front and center throughout this tuneful third album, whose bright instrumentation may sometimes remind you of George Harrison’s solo work.

At its best, on tracks like the tongue-in-cheek, countrified “Nothing’s Right” and the propulsive “Just Be Sweet,” the music, which incorporates a bassist, a drummer, and a keyboardist, as well as a female vocalist, is downright exhilarating. And Stewart’s vocals, which find a middle ground between the Jayhawks and Tom Petty, are a treat.

Tiffany Williams, All Those Days of Drinking Dust. The first words uttered by Tiffany Williams on this debut full-length album are “I am a coal miner’s daughter.” In fact, she’s also the granddaughter and great-granddaughter of Kentucky coal miners, and she sings about their plight in the title cut here. Despite that, and the lyrical echo of Loretta Lynn, this is not a record that particularly recalls Lynn and her peers. Like an increasing number of Appalachian-based artists, Williams employs elements of that region’s traditional music but updates it and adds decidedly contemporary lyrics.

Backed by an outfit that features cello, keyboards, fiddle, banjo, percussion, and guitar, she delivers emotional first-person tales about self-doubt, struggle, and yearning. She originally went to Nashville with the idea that she would write songs for others to perform, but it’s hard to imagine that anyone could sing these numbers any better than she does herself.